‘Tis futile to wish our lives never to change,
To stay in the bliss of a child’s outlook.
We’re always disturbed by the new and the strange,
Priorities puzzled as they rearrange,
Things hardly confined to the page of a book.

The friends that we make and the loved ones we lose
Accompany us just as far as they can.
And when we have finally paid all our dues
And traveled the path that each person must choose,
Perhaps we will see ‘twas all part of a plan.
____________________

Boy, just like with Donnie Darko, finding a copy of this film for my Blindspot was harder than I thought, hence why I’m a day late for this November pick. I’m always on the lookout for emotional anime films, and Giovanni’s Island promised to have something of the tragic quality of Grave of the Fireflies, which still makes me cry every time I see it. Giovanni’s Island undoubtedly borrows from the 1988 film and actually reminded me of several others as well, from the Russian exile of Doctor Zhivago to the childish friendship disrupted by war of The Boy in the Striped Pajamas. It also draws explicit inspiration from the Japanese novel Night on the Galactic Railroad, which is apparently a great classic in Japan, though it’s not surprising if most are unfamiliar with it. Some knowledge of that story might help one’s understanding of certain scenes in the movie. (It does have an anime adaptation too, which is dream-like, very slow, full of symbolism and Christian references, and might have vaguely influenced The Polar Express.)

The first parallel to Night on the Galactic Railroad is the names of the two brothers who live in a small fishing village in the far northern Japanese islands toward the close of World War II. Junpei (nicknamed Giovanni) and Kanta (nicknamed Campanella) draw their Italian-sounding names from the main characters of the book, a favorite in their family, which ignites their fascination with both the stars and trains. While the villagers expect the Americans to take control after the war is lost, it’s instead the Soviets, who waste no time in establishing themselves and commandeering the Japanese homes and school building. Despite being driven from their house, young Giovanni and Campanella befriend a Russian girl named Tanya, but the conflict and stresses of the adults around them soon strain their relationship and send the brothers away from their beloved island into the unknown.

Despite being produced by Production I.G., the same studio behind Ghost in the Shell, the animation in Giovanni’s Island is different from their other works. The sketched environments and setting details are masterful, and one scene of a front-lit toy locomotive passing between two rooms showed an amazing attention to light and shadow. The character animation, on the other hand, wasn’t bad, but I found it somewhat distracting at times. Despite all anime sharing similarities of style, character design can vary significantly, and it’s a distinction that can be very subjective with its appeal. It’s not as if it was ugly (like One Piece, in my opinion), but the look of the characters sometimes brought me out of the story, though I did get used to it with time.

There’s a lot to enjoy about Giovanni’s Island, particularly scenes designed to tug at the heartstrings. In an early scene, the school building is divided between the Russian and Japanese children, and each classroom sings their own national songs to try to drown the other out, while each room later sings the other’s song. Similarly, Giovanni becomes quite close to Tanya, and though the language barrier is barely addressed, it was encouraging to remember that children’s interactions are so much simpler than adults harboring resentment and hate. Another touchstone seemed to be Empire of the Sun, as the two siblings are soon separated from their father and cast into the harsh post-war realities of internment camps, all seen through the eyes of a child. The parallels to Grave of the Fireflies are blatant toward the tearful end, though there are differences, such as the fact that Giovanni and Campanella are never completely abandoned, at least accompanied by their teacher and uncle most of the way. Despite the similarities, it’s not a complete ripoff since the familiarly tragic end also draws from Night on the Galactic Railroad, along with several wondrous dream sequences that recreate scenes from the book.

Giovanni’s Island has plenty of moving drama, some of it probably seen before, but it presents it with warmth and sincerity, as well as grief. It didn’t make me cry like Grave of the Fireflies, but the final scene brought me close. I’m just a sucker for those kinds of poignant death-transcending reunion scenes, so it ended on a high note for me. I also enjoyed a repeated musical cue I recognized as “Those Were the Days,” a Mary Hopkins hit from the ‘60s, which recycled the tune of a traditional Russian folk song, making its use in the film more authentic. A somber tale of loss and survival that never becomes objectionable, Giovanni’s Island may combine elements from better films, but they’re combined beautifully nonetheless. 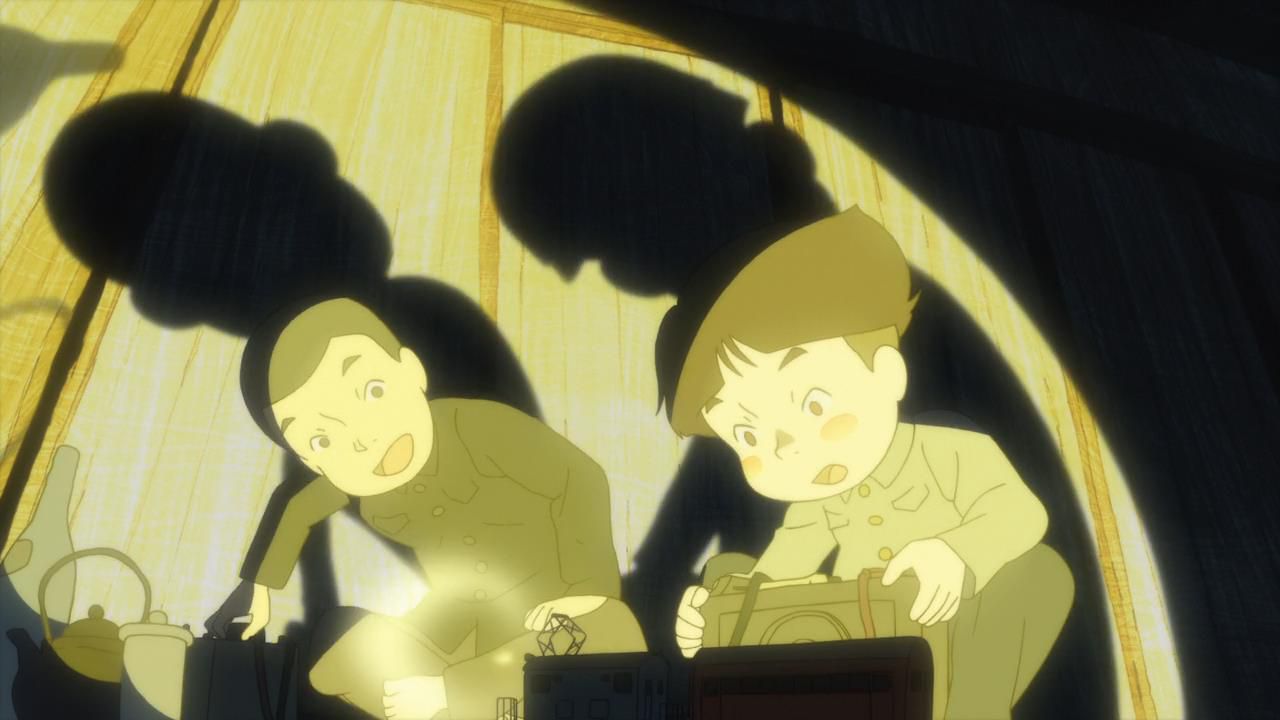 Also, you can click here for a somewhat less rosy review from Rachel of Reviewing All 56 Disney Animated Films and More!, who also had this as her November Blindspot.

Best line:  (Giovanni, when asked what Night on the Galactic Railroad is about) “When people die, they rise up into the heavens and become stars in the night sky. Those countless stars fill the sky, shining brightly and eternally, and we live our lives down here, basking in their light. That’s what the story is about.”