It’s been a while since my last Top Twelve list, so I thought “What better list to compile around Thanksgiving than a list of butterflies?” Yes, butterflies. Moths, too. Okay, maybe there are more seasonal topics out there, but sometimes I just like random lists. If you want a good reason for a butterfly list in autumn, though, I guess I can point to something I heard on the radio about not raking your fall leaves for fear of disturbing butterfly eggs/cocoons that could be hiding among them. I don’t normally rake my leaves anyway, so I’ll gladly take another excuse.

For this list, I’m ranking significant butterflies or moths in film. I’m only including films I’ve actually seen all the way through, so that excludes a host of films with butterfly titles, such as Butterflies Are Free, The Butterfly Room, The Mothman Prophecies, The Butterfly Effect,  M. Butterfly, The Blue Butterfly, A Pin for the Butterfly, Butterfly’s Tongue, and several just called Butterfly. A special shout-out also to some TV butterflies as well, such as the pussycat swallowtail hunter on Gilligan’s Island, the fun Castle episode “The Blue Butterfly,” Star Butterfly from Star vs. the Forces of Evil, and the “killer” butterfly from the classic SpongeBob episode “Wormy.” In addition, despite my research, I feel like I may have forgotten some worthwhile entries that just aren’t coming to mind, so feel free to comment with any lovely lepidopterans I might have missed. On to the list!

The hookah-smoking caterpillar is a memorable character in both versions of Alice in Wonderland, though his eventual transformation into a butterfly does nothing to improve his sour mood. And let’s not forget the bread-and-butterflies too.

I couldn’t decide which anime film to give the edge to, so it’s a tie! In Cowboy Bebop’s stand-alone film, a terrorist’s poison gas causes hallucinations, specifically glowing butterflies as death approaches. And in a rather disturbing scene of Satoshi Kon’s imaginatively bizarre Paprika, the title character is captured and pinned as a human butterfly.

The butterfly here is mentioned by the daughter of Robert Neville (Will Smith), the last non-vampire-ish resident of New York City. His daughter’s love of butterflies is a mere memory, but it also plays a part in the climax, which goes in two different directions depending on which ending you watch.

The end of this charming classic musical features Rex Harrison’s animal-loving doctor heading back to England atop the Giant Lunar Moth. It’s for anyone who ever wanted to ride a moth. Anyone?

I always had this film confused with Bullitt and thought it would have a car chase, but it didn’t. Meaning “butterfly” in French, Papillon is the nickname of Steve McQueen’s Henri Charrière, who is imprisoned on Devil’s Island in South America and refuses to give up on escape. He has a butterfly tattoo on his chest and even catches butterflies in the jungle at one point. I’ll be interested to see how this year’s remake compares to the uneven original.

Yes, reviewing this film recently might have put me in a butterfly mood, and aside from Papillon’s translation, it’s the only film here with “butterfly” in the title. The butterfly isn’t an actual presence, though. One scene of an emerging adult is the main visual appearance, while Jean-Dominique Bauby’s narration compares it to his flights of fancy and his memories. “May you have many butterflies.”

Since the one in Alice in Wonderland is a caterpillar most of the time, this is the only film here where a butterfly is an actual character, namely Gypsy (Madeline Kahn), the lovely assistant of Manny the mantis magician. She may not be one of the major characters, but a butterfly’s a butterfly, and I’d totally forgotten Madeline Kahn voiced her.

I’m stepping outside the box a bit here to include a short film, the Oscar-winning Bunny (which you can watch above) from Ice Age director Chris Wedge. An elderly rabbit is annoyed by a persistent moth, only to discover the moth’s more symbolic and emotional nature.

Butterflies are especially popular as metaphors, and this biopic of John Keats (Ben Whishaw) and his beloved Fanny Brawne (Abbie Cornish) has particularly beautiful symbolism. After Keats moves away, Fanny fills her bedroom with captured butterflies and gushes her affection through love letters, only for the passion to slowly die away like the butterfly carcasses that eventually litter her room.

Who could forget the memorable final scene of this classic anti-war epic? A butterfly collection was seen earlier in the film, and when Paul Bäumer (Lew Ayres) reaches for one on a World War I battlefield, his hand is made motionless by a sudden gunshot. Neat fact: the hand is actually that of Lewis Milestone, the director. 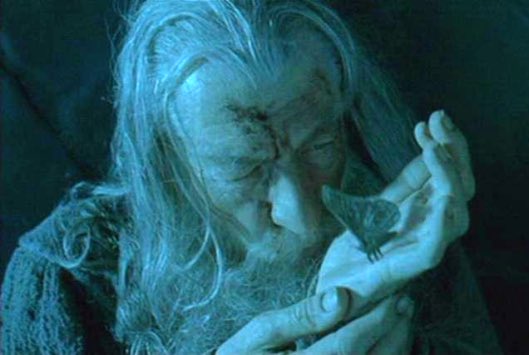 Of course, another list of mine had to feature Lord of the Rings! Gandalf’s use of a big hairy moth as a messenger eventually becomes synonymous with the intervention of giant eagles: saving him from Isengard, joining the battle at the end, and even extending their services into the Hobbit movies. That’s a handy moth to have around! I also must mention the scene in The Hobbit: The Desolation of Smaug, in which Bilbo peers above the treetops of Mirkwood and sees a host of butterflies flitting in the morning sunlight.

As much as I would have liked to give Lord of the Rings the #1 spot, it had to go to The Silence of the Lambs. I mean, just look at the famous poster! Serial killer Buffalo Bill (Ted Levine) has an affinity for the death’s head moth, raising them and inserting them in the throats of his victims. It’s also one of these moths that gives him away to Clarice Starling (Jodie Foster), and since it plays such a key role in the plot, I had to give the top spot to this morbid moth.

Corpse Bride – The title zombie dissolves into butterflies at the end.

Heidi – In the 2015 version, seeing a butterfly helps crippled Clara to stand.

The Last Unicorn – At the beginning, a capricious butterfly tells the unicorn she is the last of her kind.

Mothra – This would have been a really obvious choice for the list, but I haven’t actually seen a Mothra movie. Still, after Godzilla, he’s the second most popular giant monster over in Japan.

Snow White and the Huntsman – In that Sanctuary scene copied from Princess Mononoke, the fairy elk explodes into butterflies when it is shot.

Valerian and the City of a Thousand Planets – Watch out for butterfly-fishing!

You’ve Got Mail – Meg Ryan points out a butterfly on the subway.

Feel free to comment with any other cinematic butterflies I might have missed. Below is a lovely butterfly song from Hannah Montana: The Movie, back when Miley Cyrus was normal.

It may be several months before we get to see real butterflies again, but hopefully this list will hold you until then!