Machine and man will merge one day,
Inevitably, some would say,
And what that day will look like
It is hard to visualize:

Computers in our brains perhaps,
Robotic limbs that won’t collapse,
And access to the Net unlike
The world can now surmise.

Yet as the world drives faster still
Our cybernetic dreams to fill,
Did any on this Progress Pike
Doubt whether this is wise?
__________________

Ghost in the Shell is widely considered a classic, a game-changer for anime and the cyberpunk genre, and its growing niche popularity was bound to get Hollywood’s attention sooner or later. I, however, had little desire to see it due to its prominent violence and nudity, and it was only when the live-action adaptation with Scarlett Johansson was released that I felt I had to see it for comparison’s sake. And to be quite honest, I’m not much of a fan of the original or its remake, though that doesn’t mean they weren’t worth watching, and I found different things to appreciate in both versions.

The original 1995 film has plenty of ardent fans, but I’d be lying if I didn’t admit that it’s a tad overrated. I can’t deny its influence on the cyberpunk subgenre, particularly The Matrix, which borrowed its falling lines of green data and the characters’ neck interfaces to plug into the Net. After seeing it, the Wachowskis even reportedly told producer Joel Silver that they wanted to “do that for real,” though at least they had the imagination to come up with an original story rather than a straight adaptation. Ghost in the Shell was also a forerunner for other dark cyberpunk anime like Ergo Proxy and Psycho-Pass, but I guess I just don’t find such soulless, cyberized dystopias very appealing.

Yet it’s not the world it creates that falls short, since the terrifically detailed animation doesn’t disappoint, but the story itself does. After an assassination mission that establishes Section 9 as a no-nonsense branch of the future Japanese police force, we get a convoluted tale of a rogue hacker called the Puppet Master, which has more twists than substance and culminates by the end with very little resolution. The main character named Major Makoto Kusanagi, a cyborg officer who works best without clothes, delivers sober monologues about identity and technology but doesn’t really have much personality. The side characters are actually more interesting than her, like her lens-eyed partner Batou or non-cyberized member Togusa.

I suppose it’s easy for Ghost in the Shell to coast on its visuals and supposed depth; it does have some thrillingly iconic scenes, like an invisible smackdown on a fleeing thug, and some worthwhile themes about the necessity for variety and growth do manage to counter the moments of ponderous introspection. I will say the nudity is gratuitous. You could argue that Kusanagi’s thermoptic camouflage is built into her skin so she has to be naked for it to work, but other Ghost in the Shell installments show that there are entire uniforms that can go invisible. Critics have delved into deep themes like posthuman femininity, but I’m convinced it’s just fan service.

The 1995 Ghost in the Shell film is the franchise’s most famous incarnation, but it’s not the best. Even if the film left me cold, I was impressed by its two-season spinoff series called Ghost in the Shell: Stand Alone Complex. It’s got some of the same hard-to-follow philosophizing and excessive violence, but the overarching stories carry more depth when developed over a season’s length, which also allows far better characterization for Kusanagi and everyone else too, like the other members of Section 9 that are barely acknowledged in the movie. After seeing the two films that summarize Stand Alone Complex (and a follow-up film called Solid State Society), I find that the 1995 film’s story is even less impressive by comparison. I can’t bash the original Ghost in the Shell too much since it does appeal to some people more than me, but I would suggest that its fans check out the series for some much better storylines. (On a side note, Stand Alone Complex might also have had some influence in the West. For fans of The Dark Knight, remember when the Joker threatens a hospital to convince random civilians to try to kill Coleman Reese? I now see that it’s suspiciously similar to a scene from SAC’s season 1, in which a super-hacker takes over the minds of random citizens to carry out an assassination attempt. Interesting….)

Now what about America’s take on Ghost in the Shell, which didn’t do much to improve people’s poor opinions of live-action anime adaptations? It’s actually not that bad an adaptation in my opinion because I consider many of its flaws to be flaws the first film had. I, for one, don’t mind Scarlett Johansson’s casting, regardless of the inevitable whitewashing accusations, since others have pointed out that the cast is still plenty diverse and needed a bankable star. Even if her character is renamed Major Mira Killian, her status as a cyborg with only her brain remaining human makes her appearance relative and changeable, and the film even works in a way to contrast her current appearance with her original identity. I’ve seen critics complain about potentially deep themes that aren’t fleshed out enough, a lack of personality for Johansson’s character, and a generally lackluster story, but I felt that was the case for the original too. 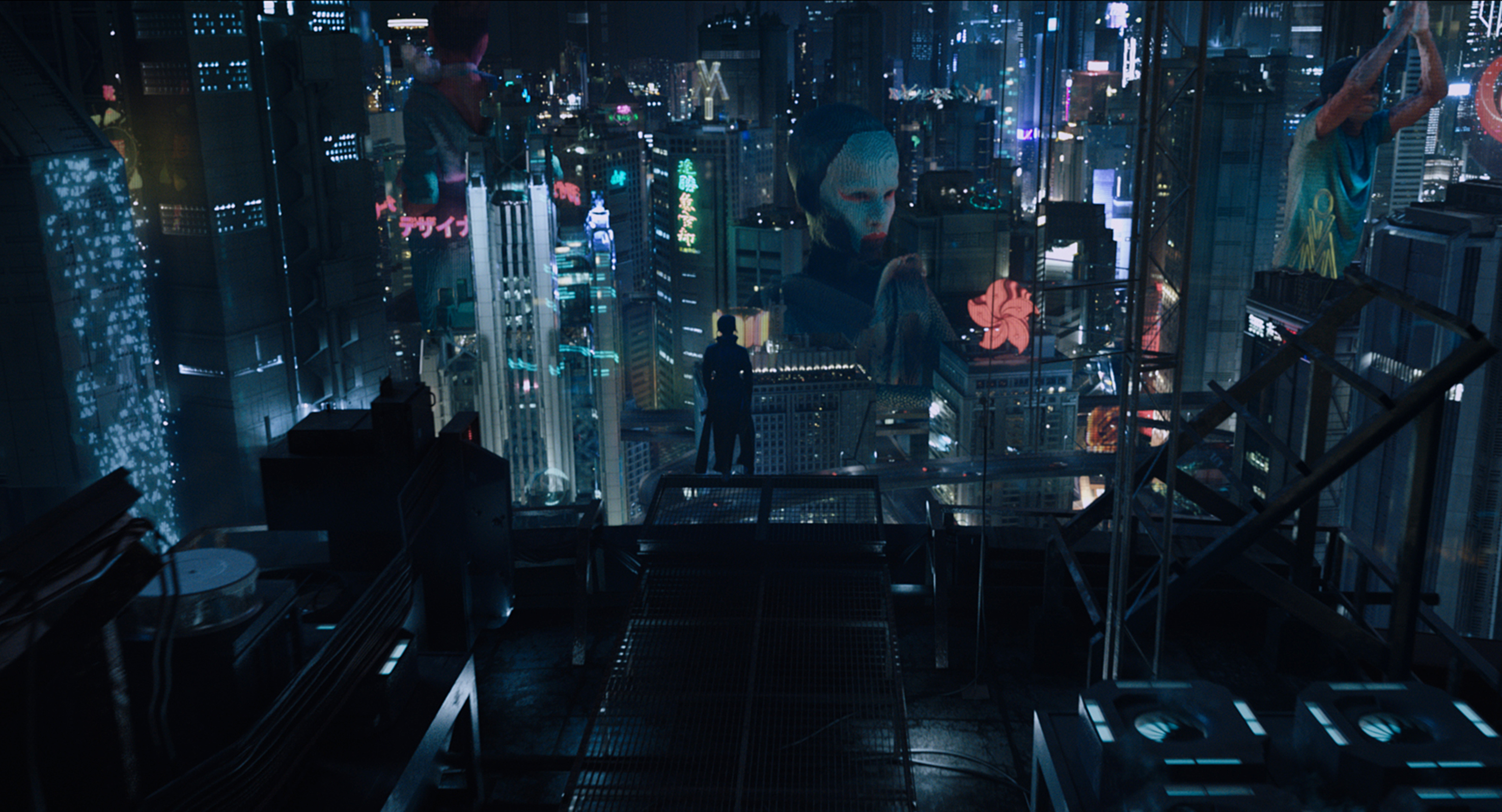 The strangest thing for me was something that I haven’t seen any other reviews point out, namely that 2017’s Ghost in the Shell isn’t just a straight remake of the 1995 one, but an odd amalgamation of several Ghost in the Shell incarnations, including the Stand Alone Complex series. There are numerous scenes lifted shot for shot from the 1995 film, like the invisible beat-up, the spider tank fight, and the opening montage of creating the Major’s body, but they are all placed in a completely different context. The first action scene with the robotic geishas is straight from the first episode of SAC. There’s also a scheme to pick off Section 9’s members (like SAC’s first season about the Laughing Man), the incorporation of Major’s antagonist/counterpart Kuze (from SAC’s second season), and a secret government kidnapping plot (from the Solid State Society movie). It was seeing all these disparate elements combined with a totally new story of Major questioning her identity that felt strange to me, like I wasn’t sure which story they would try integrating next.

One aspect of remakes that Hollywood can be expected to get right more often than not is the impressive visuals, and like the anime, the world of seedy, hologram-laden skyscrapers it creates is far more intriguing than the characters in it. That’s not to say it’s a place I’d want to visit, but its visuals at least honor the original and its predecessors, like Blade Runner, even if it’s also alienating.

With its obvious nudity, I never would have thought a live-action Ghost in the Shell would receive a PG-13 rating, but that reflects the fact that the 2017 film tries to soften the harder edges of an anime that is definitely not for all tastes. Johansson’s robot body is more like a skin-color body suit, like the blue Mystique from the X-Men movies, and its intentionally manufactured appearance makes it less flagrant than the original. The same goes for the violence: the film does its best to make itself gritty and unpleasantly ruthless, but at least there aren’t any of the graphic head shots from the film and series. Even Major’s characterization is less stone-faced than her animated version (though I’ve heard every version of her is somehow different from the manga). In contrast to the emotionless ambiguity of the 1995 film’s ending, the search of Johansson’s Major for her past offers a shred of poignancy to hold onto, something I actually felt was an improvement.

Neither Ghost in the Shell is perfect or even close to perfect, in my opinion, but they have enough atmosphere and intrigue to be worth discussing. Both do have the repeated Ghost in the Shell plotline, which the TV series helped me recognize, that being “Super-hacker seems like bad guy until it turns out to be an evil government/corporate conspiracy.” I suppose the 1995 film could be seen as a philosophical sci-fi film with some action, while the remake is an action film with some philosophy. Although the 2017 version is considered a flop, it might be the best anime-to-live-action adaptation so far (I’m hesitant to see the widely panned Death Note), at least nailing the original’s distinct visual merit. With more anime adaptations on the way, including Your Name (please don’t ruin it, J.J. Abrams!), there might be hope for future efforts to do better with more appealing source material.

Best line from 1995 film: (Kusanagi) “You talk about redefining my identity. I want a guarantee that I can still be myself.”  (Puppet Master) “There isn’t one. Why would you wish to? All things change in a dynamic environment. Your effort to remain what you are is what limits you.”

Best line from 2017 film: (Dr. Ouelet) “We cling to memories as if they define us, but they really don’t. What we do is what defines us.”

Rank for both: Honorable Mention