(Today’s NaPoWriMo prompt was to incorporate twenty random elements into a poem, but, since using all of them would likely result in nonsense, I tried to use at least 8 or 9 in a poem from the viewpoint of a tortured reflection.)

My life is death, for I don’t live. I imitate. I mock.
A mirror image knows its cage, no need for bars or lock,
A mime condemned to emulate another round the clock.

“I’m just so happy,” says my smile, when I am forced to wear it.
My joie de vivre is copy-pasted, hollow when I bare it.
Only when my twin shows grief can I completely share it.

“Keep up! No rest!” the glass wall cries between my twin and I.
The fluid hardness of its bounds compels me to comply.
I do the simulated dance, no understudy nigh.

After the cultural splash that Get Out made, Jordan Peele had a lot to live up to with his next foray into horror, and in light of some strange confusion surrounding his first film’s genre, he left no doubt that Us is straight-up horror. Peele is definitely an auteur, able to brilliantly craft tension and chills and blessed with gifted actors to bring his stories to life, but Us feels like a tale he didn’t think through enough.

At the beginning, we meet Adelaide (Madison Curry as a child, Lupita Nyong’o as an adult), a young girl who wanders off at a beachside carnival and comes face to face with a terrifying doppelganger in a hall of mirrors. Many years later, she’s married to Gabe (Winston Duke, Nyong’o’s Black Panther co-star), and together with daughter Zora (Shahadi Wright Joseph) and son Jason (Evan Alex), the Wilson family goes on vacation not far from that same beach that has haunted Adelaide ever since. Without warning one night, an identical family breaks into their house with bloodthirsty intentions, and the Wilsons must fight to survive against their doubles. 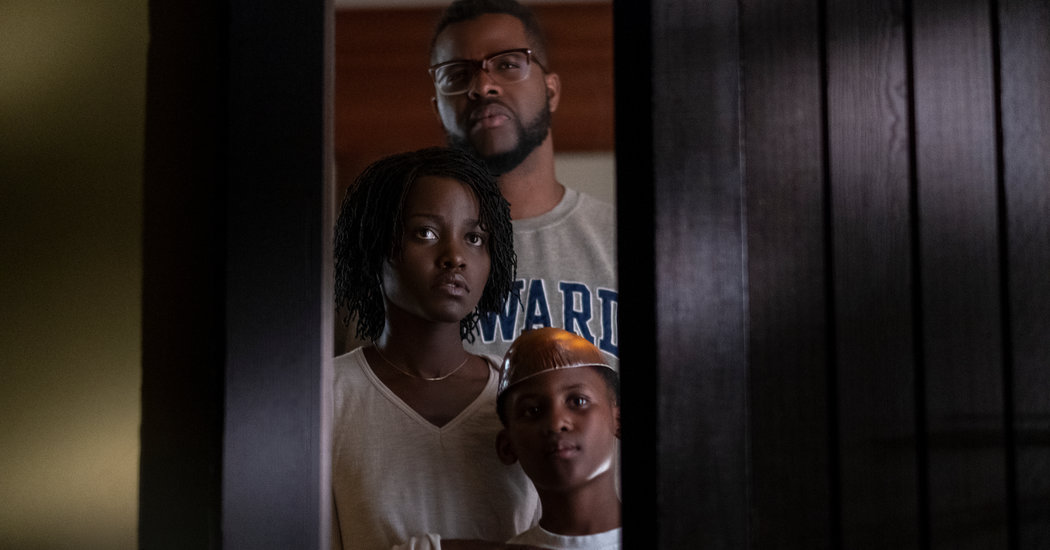 Us does a lot of things really well, from the visceral panic of the home invasion to Peele’s skillful direction that keeps the adrenaline up and only shows you what he wants you to see. And like his previous film, he manages to incorporate some dark comedy, more successfully than in Get Out I thought, such as the Wilsons comparing their kill counts during a break in the action. Indeed, the first two thirds of Us are a horror masterclass, albeit a bit too bloody for my liking, but undeniably well done, even taking a rap song and turning it into a creepy segment of the score. All the actors do wonders with their dual roles, Nyong’o especially, nailing both their frightened and malevolent personas with apparent ease.

But then there’s the last third, which seeks to offer explanation where none suffices. The origins and previous lives of the doppelgangers are purposely bizarre, but their “way of life” simply makes no sense. Why are they sometimes compelled to mirror the Wilsons’ actions and other times not? Where do the rabbits come from? What is the purpose of the “Hands Across America” re-creation? I could go into a lot more spoiler-y detail, but suffice to say, the logical side of my brain was left screaming, “What the heck? This. Doesn’t. Make. Sense!” I see the intended symbolism of a grotesque mirror image of our world, as well as the overplayed theme of one person’s prospering resulting in another’s suffering, but it’s as if Peele forced the story to fit the message and no one wanted to tell him how illogical it had become.

For a film that initially feels so well-made, it’s a shame that the plot is ultimately so half-baked. I will admit the final twist packs a surprising and disturbing punch, which was unfortunately spoiled for me by none other than Lupita Nyong’o herself on Inside the Actor’s Studio. I didn’t think Get Out was the masterpiece many people said it was, but it at least didn’t leave me bewildered with its own implausibility, as Us did. I hope Jordan Peele takes more time for his next film to flesh out the story with the same talent he brings to the scares.

Best line: (Jason) “When you point a finger at someone else, you have three pointing back at you.”