(Today’s NaPoWriMo prompt was to write a poem from the viewpoint of a character or creature from Hieronymus Bosch’s The Garden of Earthly Delights, which is so full of bizarre imagery that he must have been high on something for the twenty years he painted it. After drawing an initial blank, I decided to write something from the viewpoint of the animals since Creation.)

I’m a pet, and you’re a pet,
But let us never once forget
That, when the world was new at birth,
We animals ruled all the earth.
The dogs and cats and tall giraffes,
The fish and lizards, foals and calfs
Held full dominion over all,
Utopia before the Fall!

It’s not bad, just uninspired, but so was the first one too, with its mish-mash of Toy Story with pets. The obvious imitation of the Woody/Buzz conflict with dogs Max and Duke was resolved in the first film, so the second has a little more room to do its own thing with its charming cast of characters, such as little dog Max (Patton Oswalt, replacing Louis C.K. after the latter’s scandal) wanting to rediscover his fearless side during a weekend farm visit, or tough-guy bunny Snowball (Kevin Hart) trying to pass himself off as a superhero by saving a tiger.

New additions include Harrison Ford as a pleasantly grizzled farm dog and Tiffany Haddish as a Shih Tzu with attitude. As a cat lover, I especially got a kick out of Chloe’s (Lake Bell) teaching the way of the cat to Pomeranian Gidget (Jenny Slate), who is still the best thing about this franchise and gets the funniest scenes. 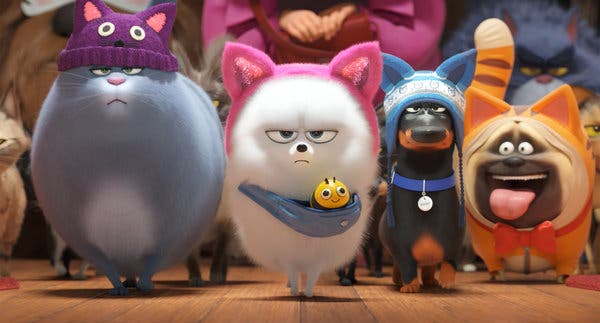 It’s all cute and harmless with very little depth, but some clever comedic moments make it enjoyable and perhaps a bit better than the first film. Even when the plot tries to bring its many loose threads together at the end, it still feels like a bunch of potential TV episodes pasted into a feature film. This is clearly a franchise meant to appeal to the kids with little effort for their parents, but I can see those kids growing up with fond memories of it. Not every animated film has to break the mold, I suppose.

Best line: (Snowball) “I just freed a tiger. That’s not bragging; I’m just saying what happened. When you’re awesome, everything you say sounds like bragging.”