We all survive in different ways
When struggles line our path.
We cry, we grieve, we carry on
And curse the aftermath.

There’s healthy ways to deal with loss,
Like, say, the world’s demise.
Yet most dystopias suggest
That man won’t be so wise.

Authoritarian regimes
Are now a stock motif.
But giant cities set on wheels?
That takes some disbelief!

I’m clearly more forgiving than most critics when it comes to the fantasy and sci-fi genres. In fact, I could probably compile a list of sci-fi films that critics have savaged and I’ve still enjoyed (note to self: make such a list for later). I was eagerly awaiting the release of the Peter Jackson-produced Mortal Engines, which promised a young-adult Mad Max: Fury Road on an even bigger scale, but then it tanked at the box office and earned a mere 26% on Rotten Tomatoes. That made me question my prior expectations, but now that I’ve seen it, it definitely fits into the category of movies that are better than their reviews indicate. 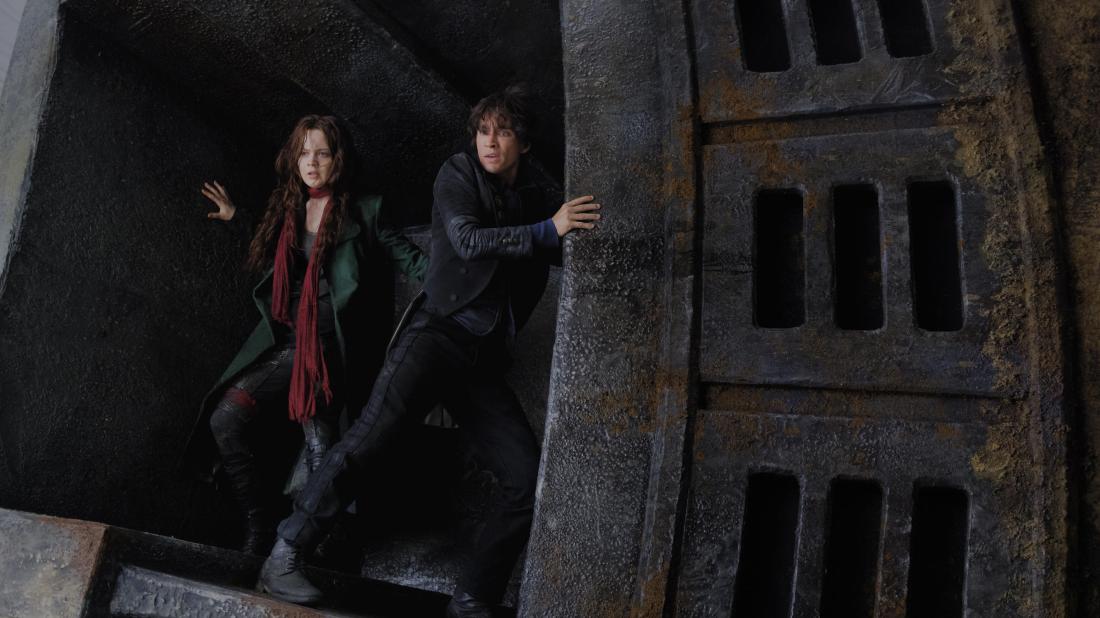 Based on the first of a quartet of novels and directed by Christian Rivers, who has worked on the effects of many Jackson films, Mortal Engines is one of those far-flung, highly unlikely post-apocalyptic futures where the world has radically changed and forgotten its past, as evidenced by the amusingly misinterpreted “relics” of our present day. In this world, a terrible war has led to a system of “municipal Darwinism” in which cities have become mobile, mounted upon enormous tank tracks so they can hunt smaller towns for their resources, with London being the strongest. A scarred girl named Hester (Hera Hilmar) seeks revenge on London’s Deputy Lord Mayor Valentine (Hugo Weaving in familiar villain mode) for the death of her mother, and when a museum worker named Tom (Robert Sheehan) learns the truth, he is thrust into a journey with Hester to stop Valentine’s plans for world domination.

Mortal Engines has its imperfections, particularly in the way it blatantly echoes many better movies, such as Star Wars and Howl’s Moving Castle. (Really, Star Wars is a huge influence.) Yet there’s nothing that would warrant the film’s poor box office, unless people just don’t connect with the story’s post-apocalyptic quest and relatively unmemorable characters. The actors do their best, though, and I thought the film more than made up for its weaknesses with its epic steampunk visuals and fast-paced storyline.

There are many references to unfamiliar places and events that are unique to the film’s internal history, and while this might make it hard to follow at times, I love this kind of world-building, making the story’s universe feel bigger than what we see onscreen. The moving cities crafted by Weta Digital reflect the same level of commitment and detail that the company brought to Peter Jackson’s Middle-Earth films. And while the plot can feel derivative at times, one subplot featuring Stephen Lang as an undead cyborg adds great tension and a surprisingly emotional payoff. Mortal Engines may not be the blockbuster I thought it could be and certainly isn’t on par with The Lord of the Rings, but for fans of the genre, it’s a large-scale, effects-heavy adventure that deserved much better.

Best line: (Katherine Valentine) “How can a society so advanced, so scientific, be so stupid?”   (Tom) “Well, no more stupid than people today.”