The universe is vast and grand
And larger than we can explore,
Yet what if there were more than one
With possibilities galore.

In one dimension, you might be
Reclining underneath a tree.
In one, you’re driving;
One, in bed;
In one, surviving;
One, you’re dead.
In one, you may be ten feet tall
Or climbing up a building wall.
In one, your hair is blond or red;
Another, you have none at all.

MPAA rating:  PG (probably the most family-friendly big-screen version of Spider-Man to date)

Many out there who are experiencing superhero fatigue might roll their eyes at the prospect of yet another Spider-Man movie. After all, they’ve already covered this Marvel character with an excellent trilogy with Tobey McGuire, two lesser reboot films with Andrew Garfield, and an MCU incarnation with Tom Holland, so how else could another film retread the same material? A better question after actually watching Into the Spider-Verse is “How can a film with so much prior history turn out to be possibly the most original and innovative movie of the year?”

I remembered the Spider-Man cartoon from the ‘90s had multiple versions of Peter Parker teaming up at times, but I never expected that kind of universe-spanning storyline to make it to the big screen, considering that the spider-mantle keeps getting handed off every few years. Animation was clearly the best medium for it, especially with the involvement of producers Christopher Miller and Phil Lord (Cloudy with a Chance of Meatballs, The Lego Movie), the latter of whom also co-wrote the screenplay.

The story is quite simply everything we know and love about Spider-Man mixed, mutated, and amalgamated in ways I never thought I’d see. By diving into the multiverse, full of different incarnations of the wall-crawler, it combines the familiar with the new to create something fun and unexpected. For one thing, there are at least seven spider-people total, along with alternate versions of Spider-Man’s rogues gallery, and while the story focuses on Miles Morales (Shameik Moore), a black teen bitten by a universe-hopping spider, there is so much going on in Into the Spider-Verse that I won’t even try describing it all, which is best anyway since I don’t do outright spoilers anymore.

Miles himself is an authentic and relatable kid, street-savvy but smart, who is pulled in way over his head when the hulking Kingpin (Liev Schreiber) opens up a portal to other dimensions, summoning varied Spider-people, from a spider-powered Gwen Stacy (Hailee Steinfeld) to an over-the-hill Peter Parker (Jake Johnson) to a talking pig from a universe of funny animals (John Mulaney). While it gets as crazy as it sounds, the characters are marvelously written, each one with their own in-jokes, histories, and personal arcs, most notably the older version of Peter Parker, who is forced to mentor Miles in order to get back to his own universe.

The character dynamics are great, yet I feel like I’ve barely scratched everything to love about this movie. I never knew much about Miles Morales’ origin story in the comics, but it’s hard to imagine it being better than this film version. There are touchstones to the familiar Spider-Man origin, but it plays out with clever and unique differences, which, along with the multitude of jokes and gags, especially reward the geeky knowledge of fan nerds like me. I don’t usually like familiar characters being reimagined for the sake of diversity, as Hollywood so often does, but the multiverse concept is the perfect way to handle it, introducing new versions of characters, whether it be a black Spider-Man or an anime-style girl and robot team, while leaving the familiar intact.

And let’s not forget the animation; it’s quite literally unlike anything we’ve seen before, a mixture of 2D and 3D with images that feel ripped from the panels of a comic book while also boasting amazingly fluid action scenes. Somehow, the mixing of animation styles (anime, exaggerated cartoon) merges with the main style seamlessly, which fascinates me to no end. Comics are an unmistakable visual influence, such as the dotted background texture of many scenes, and I liked how thought bubbles and such became more pronounced when Miles began experiencing the heightened senses of his spider-powers. 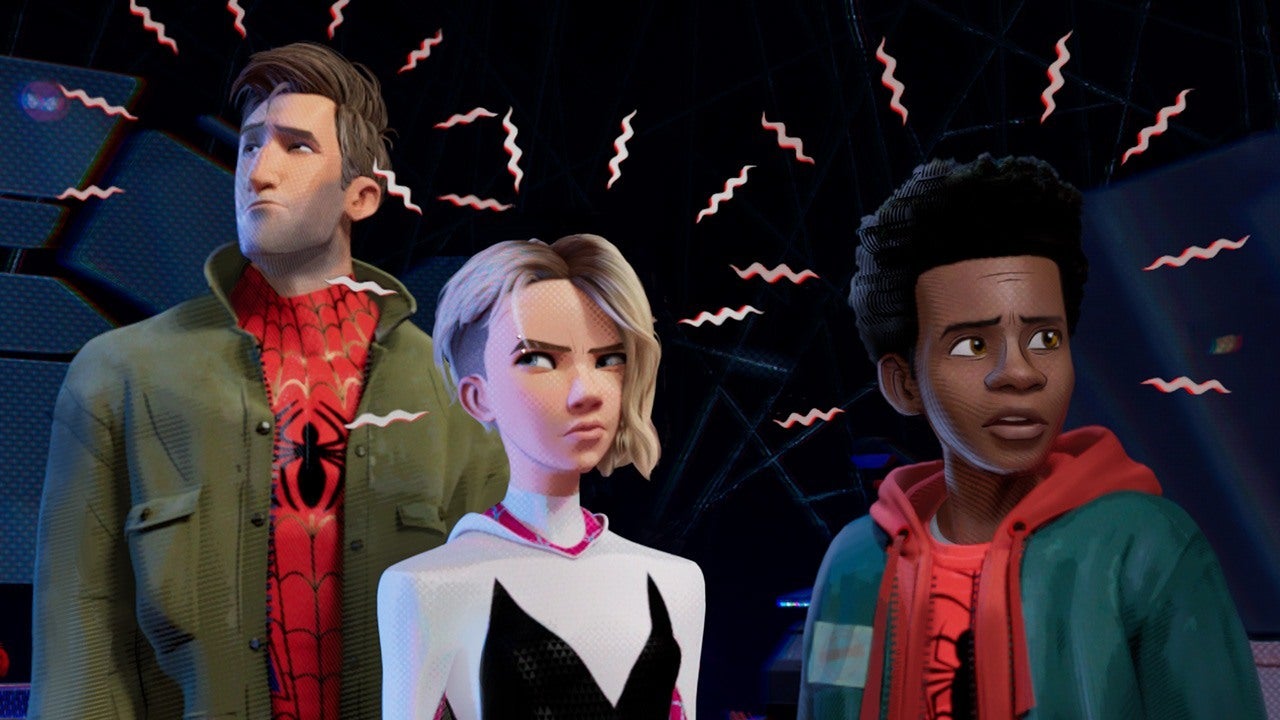 Speaking of heightened senses, the animation in Into the Spider-Verse is likely to yield sensory overload, not unlike Lord and Miller’s earlier film The Lego Movie. The pace and visuals are similarly frenetic, though more sophisticated and not as hard to follow, especially during the eye-popping, reality-warping finale, which might be as close as I ever get to an LSD trip. Every scene is full of such life and detail that I honestly cannot wait to see it again.

While I loved everything –characters, animation, action, story, the touching Stan Lee cameo/tribute—I will say one thing didn’t thrill me, namely the soundtrack. Befitting the urban setting of Miles’ world, it’s largely hip hop and rap, the value of which still eludes me. (Seriously, what’s catchy about someone talking to a beat?) Post Malone’s “Sunflower” was the only song I halfway liked, but that’s likely a personal gripe, since I’ve heard other people laud the soundtrack. One brief scene featured a great little snippet of John Parr’s “St. Elmo’s Fire (Man in Motion),” which only made me wish the soundtrack had less rap and more ‘80s rock. My VC enjoyed the movie overall and agreed the visuals were amazing and Oscar-worthy, yet, though she recognized the trippy style as something outstanding, it simply wasn’t for her. Then again, she also tends to discount the value of animation, viewing it generally as lesser than live-action, to which I quote the talking pig: “You got a problem with cartoons?” I certainly don’t. This film just keeps getting better in my head the more I think about it, and I’m actually looking forward to the inevitable spin-offs and sequels it will spawn. If you have any fondness for the character of Spider-Man, I suspect there is something or many things you will love about this movie. Spider-Man may be a well-worn franchise by now, but Into the Spider-Verse just reinvented it in a way no one saw coming.

Best line:  (Miles, buying a Spider-Man costume) “Can I return it if it doesn’t fit?”  (Stan Lee) “It always fits, eventually.”