The world can be cruel and compromising,
Goodness crumbling, evil rising.
Such a fact isn’t at all surprising;
Simply look around to see.

But harder to view is where the fantastic,
Magic subtle and not bombastic,
Turns the desolate and the drastic
Into beauty’s final fee.

Sorry for the longer-than-expected hiatus lately. I’ve been in the midst of the busiest time of my class project, and just graduated from the program, so now I’m job hunting but also have a little more extra time to post again. I hate that my 2018 Blindspots have run so late into 2019, but I just have this one last review to finish off what I began a year ago! So before I announce the Blindspots for 2019, it’s time to cover Pan’s Labyrinth, Guillermo del Toro’s acclaimed Spanish fantasy.

I didn’t realize when I picked them, but my 2018 Blindspots have introduced me to some directors that I only knew by reputation. I’d never seen a Charlie Kaufman-written movie before Eternal Sunshine of the Spotless Mind, and I’d only seen one other Billy Wilder film before Some Like It Hot. Surprisingly, I’d also never seen a Guillermo del Toro-directed movie either, so Pan’s Labyrinth was like a fresh initiation into the Oscar-winning director’s style. And what a style! Pan’s Labyrinth is as skillfully directed a film as I’ve ever seen, and it’s mind-boggling to me that del Toro wasn’t nominated for a directing Oscar that year, though it did win deservingly for Cinematography, Production Design, and Makeup. The movements of the camera, often changing scenes as it passes behind an object, lends the film a lucid fairy tale quality, despite the contrast of its more true-to-life content. 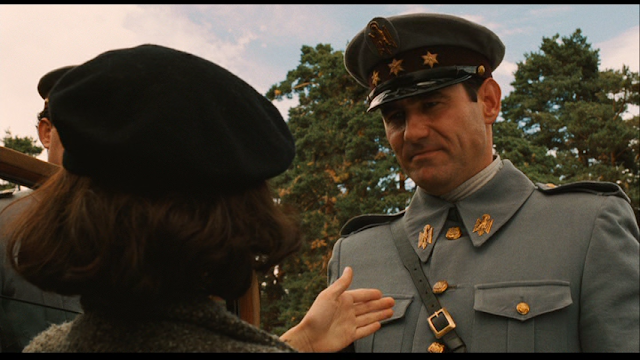 The storyline is also engaging, split between the realistic and the magical. Young Ofelia (Ivana Baquero) is taken by her pregnant mother (Ariadna Gil) to a military base in the woods in 1944 Francoist Spain. There, Ofelia’s merciless new stepfather, Captain Vidal (Sergi López) is hunting down armed rebels and eagerly waiting like Henry VIII for his wife to bear him a son. Meanwhile, Ofelia discovers a mysterious faun (Doug Jones) in a nearby labyrinth, who gives her three tasks in order to supposedly claim her rightful place as princess of the underworld.

At times, the juxtaposition of truth and myth don’t quite mix. When rebels are fighting and dying on the battlefield, it’s a bit hard to care about Ofelia’s forays into fantasy, which may or may not be real themselves. Yet these fantasy sections remain the most memorable, offering the film’s most lasting creature creations, and even these flights of imagination remain somewhat grounded in life-and-death stakes, harkening back to the grimness of the original fairy tales. You know it’s a fantasy when there are giant toads and transforming fairies; you know it’s a dark fantasy when a monster with eyes on its hands bites the heads off those fairies!

Personally, I thought the film as a whole was much more graphic than it needed to be, whether it be some unflinchingly brutal battlefield violence or a firsthand look at how the Joker got his scars. Even so, Pan’s Labyrinth has craft to spare, particularly in its enchanting score and the ornate production design and makeup work of its fantasy elements, laudably brought to life with a bare minimum of CGI. The ending is especially moving, combining the climax of its real-life and fantasy stories into a bittersweet conclusion that artfully leaves its interpretation up to the viewer. It left me haunted in a way great cinema should, and even if not everything melded perfectly, Pan’s Labyrinth proved to be a very worthwhile Blindspot pick.

Best line:  (Captain Vidal) “You could have obeyed me!”   (Doctor) “But Captain, to obey – just like that – for obedience’s sake… without questioning… That’s something only people like you do.”