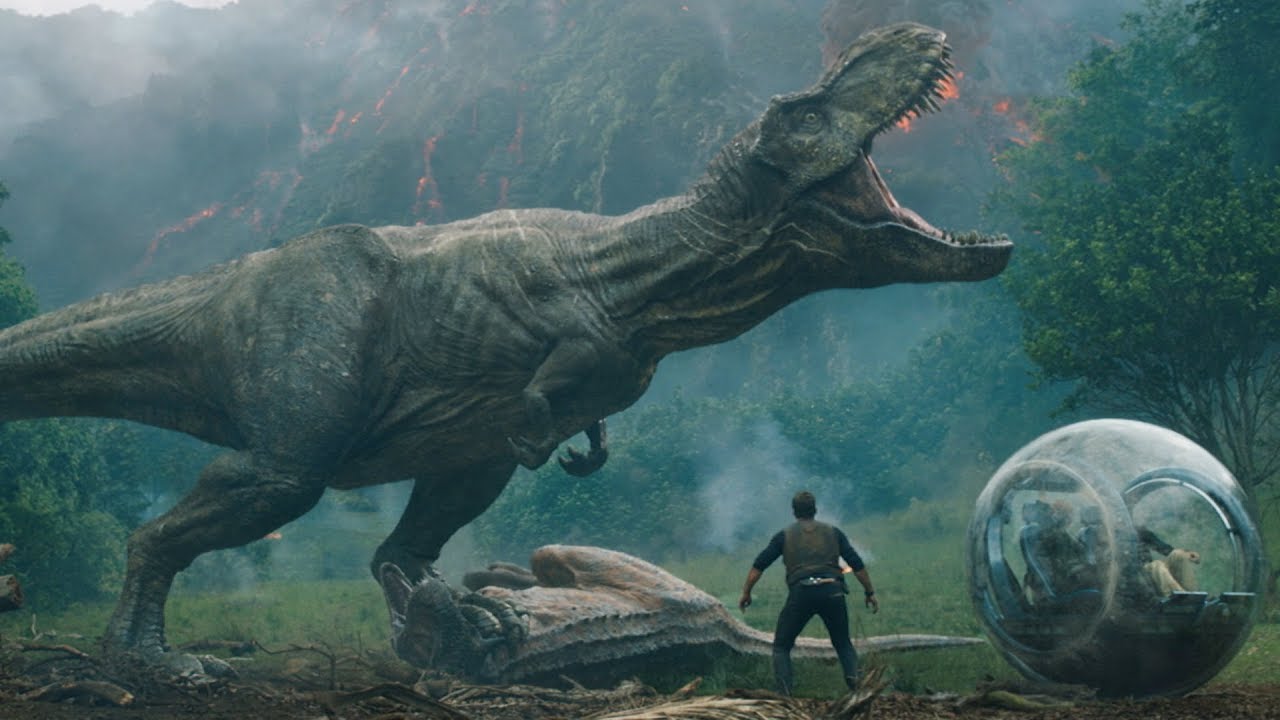 History repeats itself more often than it should,
For man is vain and foolish even after childhood.

The same mistakes will plague mankind until at last we learn,
Though when that may or may not come is cause for some concern.

For starters, Jurassic World: Fallen Kingdom was never very high on my list of highly anticipated movies this year. The first Jurassic World was good and I like anything with Chris Pratt, but the law of diminishing returns definitely applies here. Some years after the incidents of Jurassic World, Claire (Bryce Dallas Howard) and Owen (Pratt) are called back to the island of dinosaurs to rescue as many as possible before the volcano erupts, and naturally the sponsor of the expedition has some ulterior motives.

It wasn’t until I actually saw the movie that I realized why my excitement for it was so low: the trailers. The entire first half of the movie on the island was spoiled in the trailers, making even scary or spectacular scenes carry zero tension for me. I’m sure future viewers who didn’t see the trailers beforehand might not have this problem, but I wish the trailer editors wouldn’t divulge so much, even the ending itself. Granted, the second half, mostly set in an expansive mansion on a dark and stormy night, carries a great deal more anxiety, shock value, and stylish horror flourishes, but skilled director J.A Bayona can’t completely reinvent the wheel.  Arrogant characters still make dumb decisions, and despite efforts to stay inventive, it feels like this series doesn’t have much new to offer.

There’s an ongoing argument of whether the dinosaurs should be allowed to die out again or not, a question about which my VC felt strongly. She didn’t see why everyone was insisting on saving the dinos, and while I lean more toward the conservationist viewpoint of keeping them alive but contained, I do think the film’s message is left muddled. (Plus, why Claire is suddenly so protective of the dinos, I don’t know.) By the end, one character sides with saving the deadly animals above all other concerns, putting their lives above human ones, which is a thoroughly wrong-headed sentiment that left a sour taste none of the other sequels have. My VC and I agreed that “because they’re alive” isn’t a good enough reason to put human lives in danger when it comes down to either us or them.

Oh, and one other thing. Everyone was talking about the dinosaurs becoming extinct again after the volcanic eruption on Isla Nublar. What about Site B on Isla Sorna, which has never been mentioned since Jurassic Park III? There should still be dinosaurs on that island, right? Anyway, I don’t mean to sound like I hated it, since it still had many of the ingredients that made the first Jurassic Park and Jurassic World enjoyable, just watered down and overly spoiled by trailers. Time will tell if the next sequel can redeem this one’s weaknesses.

Best line: (Ian Malcolm, in a welcome but all-too-brief cameo) “Change is like death. You don’t know what it looks like till you’re standing at the gates.”