In a galaxy far, far away, I’ve been told,
There are stories that fit in an orthodox mold
Of Death Stars and daring
And Jedi preparing
To free all from some evil emperor’s hold.

There are stories as well that are harder to tell,
That leave our hopes answered or dashed where they fell.
The many may mourn
With rebuttals of scorn,
For isn’t it always correct to rebel?

But stories in galaxies distant and near
Can hold fans and fault-finders equally dear.
Some waver and jeer;
Some stand up and cheer.
Does it matter who’s right when we’re both so sincere?
____________________

I don’t get it. I just don’t get it. Despite desperately avoiding spoilers, I quickly realized that The Last Jedi was to be a divisive entry in the Star Wars canon. Everything I did hear has been the critics lauding it and my fellow movie bloggers and “regular people” coming away with mixed feelings, thinking it falls somewhere in the middle of the pack and certainly below The Force Awakens. There’s even a petition to have it struck from the Star Wars canon. Now that I’ve seen it, I just don’t get the backlash because I LOVED IT! That’s right; for every divisive movie, you’re bound to get the full spectrum of audience reactions, and to balance out all the half-hearted ones, I’m here for a fully positive, non-spoiler review. My tastes probably differ from the majority. After all, I’m the guy who still loves La La Land, but personally I think The Last Jedi is head-and-shoulders above Force Awakens. 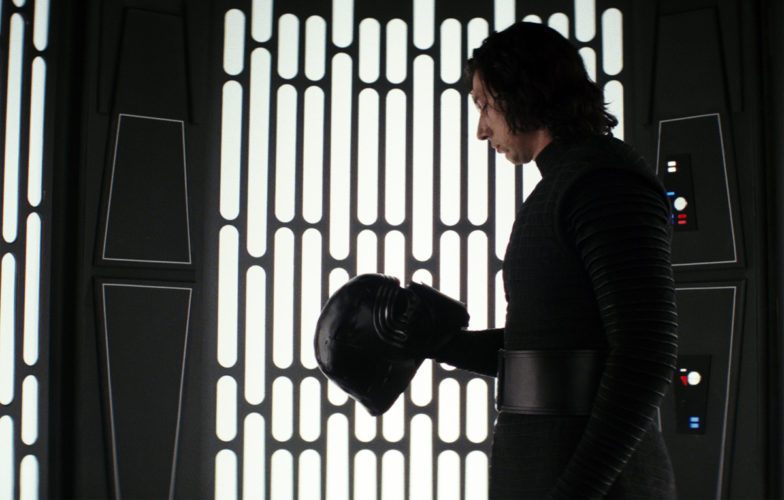 Let me explain that perhaps shocking claim. I liked The Force Awakens and liked it even better upon a rewatch, but I’ll always consider it “the one where they killed Han Solo.” I remember walking out of the theater with my whole family shell-shocked, not high from a rousing film as it sounds like most people did. Not to mention, it’s too similar to the original movies. I now joke that, if it was a drinking game to take a swig every time there’s some parallel to the originals, you’d be drunk by the halfway point. Thus, I’ve come to value originality, which might be why I enjoyed Rogue One more than most as well. And The Last Jedi has originality to spare. There are still clear echoes of its forerunners (Jedi training in solitude, escaping from a besieged base), but those are broad strokes in a film that is far from a retread of what came before.

Last Jedi follows several plotlines that converge by the end: the Resistance trying to escape the overwhelming attacks of the First Order, Poe Dameron (Oscar Isaac) taking matters into his own hands for the sake of their survival, Finn (John Boyega) and newcomer Rose Tico (Kelly Marie Tran) endeavoring to shut down an enemy tracking device, and of course Rey (Daisy Ridley) training and trying to convince Luke Skywalker (Mark Hamill) to return to the fight while also finding a connection with Kylo Ren (Adam Driver). I didn’t find any of these plotlines to be boring, though it’s true that Finn’s role is fairly inconsequential by the end, and the stakes are as high as they’ve ever been in a Star Wars movie. In fact, one of my concerns is the sheer number of casualties on both sides. Still, hope is one of the key themes, as it has been since the beginning of the franchise, and despite how dark things get, it never failed to be entertaining, helped by a good dose of humor. (Again, I welcomed the levity that others have criticized. My mom still talks about how the entire theater was erupting with laughter during Episode IV’s theatrical run, so I don’t see what’s wrong with the humor here or how it’s not Star Wars-y enough. Again, maybe I’m just different, considering I’ve never hated the Ewoks or even Jar Jar Binks.)

The originality I mentioned is explicitly acknowledged by Luke’s warning that “This is not going to go the way you think.” Whenever you think you know how something will play out, it veers in another direction. Granted, that sometimes makes certain actions meaningless, but it also keeps things continually fresh and unpredictable, spicing up what could easily have been a paint-by-numbers sequel. A key thematic struggle is what the best course of action is, not in a morally gray sense, but as far as whether to fight or flee and whether to obey orders, sort of tapping into the same fearful desperation as Dunkirk.

The new cast continues to be engaging, with the advancement of Rey, Kylo, and Poe’s characters especially, and unexpected callbacks to the original trilogy deepen the emotion of several scenes. There were new characters I liked, like Rose, and new characters I didn’t hate, like Benicio Del Toro’s codebreaker named DJ, but all the performances were excellent. Luke and Leia have plenty to do as well, and each has their standout scenes. (Unfortunately, one of Leia’s is also the most eye-rolling moment of the film.)

Yes, there are disappointments, particularly for the much-theorized questions about Supreme Leader Snoke (Andy Serkis) and Rey’s origins, but those didn’t detract too much for me, especially because I’m not convinced they’re entirely settled. Remember that Luke and Leia being siblings wasn’t revealed until the third film. Plus, the vacuum of space doesn’t seem to be as deadly as it is in real life, something I’ve also noticed in Guardians of the Galaxy, for example. Perhaps the biggest disappointment that none of these more recent films can escape is the fact that Luke and Leia and Han didn’t get the happy ending we assumed after Return of the Jedi. That’s inherent to any continuation, but given the story established in Force Awakens of Luke becoming discouraged by yet another rebellious apprentice, The Last Jedi builds the plot admirably and respectfully, just perhaps not as die-hard fans might wish. One potentially problematic flashback is made more understandable when viewed as a moment of weakness and a misunderstanding, and I found the ending open enough to expect great things from Episode IX. And I’m sorry, there’s nothing here nearly as traumatic as Han Solo’s death at the hands of his own son. Why weren’t people rallying petitions to undo that?!

One aspect the prequel trilogy always excelled at was the action sequences, and The Last Jedi did not disappoint, especially since the whole movie is practically one long space battle. Laura Dern’s Admiral Holdo gets one of the film’s most epic sequences, while Mark Hamill gets the scene of the year, in my opinion. Even Rose and Finn’s jaunt on a casino planet was a fun diversion from the life-and-death struggle of the main plot. John Williams’ still-iconic score, the visual effects, and the odd creatures (don’t hate on the Porgs) were every bit as Star Wars-y as Force Awakens, in my opinion, and the light saber duels are as awesome as we’ve come to expect from this series.

I guess I do understand some of the gripes people have had, such as the out-of-left-field new aspects of the Force or how wasted Gwendoline Christie’s Captain Phasma is, but for the larger uncertainty, I’d like to cite The Empire Strikes Back. Everyone hails it as the best of the franchise (I disagree), but think of how many questions were left at the end of that film. Was Lando Calrissian any better developed at that point than some of the new characters here? I mention this because my mom remembers how disheartened she was back in 1980 and how she would poke holes of her own, complaining that she couldn’t understand Yoda and the whole training part was boring and it was disappointing that the hyperdrive kept failing. Middle movies are often trickier than beginnings and finales, and based on my own initial enjoyment and how much happens in The Last Jedi, I do think that people will come to appreciate it more with time. So don’t overreact.

Unlike The Force Awakens, I did walk out of The Last Jedi beaming at the thrill of a great movie, and I compliment Rian Johnson’s divisive direction. In fact, it might be my favorite film of the year. My one big complaint is how long it is and how desperate I was for a bathroom by the end. I have no idea where Episode IX will take this tale, and that’s a good thing, to my mind, though I do hope it ends on a high note. While I was nervous going in, The Last Jedi had me guessing, laughing, sweating, and silently cheering from start to finish, and while I’m sorry for those who had less positive experiences, the controversies didn’t diminish my enjoyment one bit.

Best line: (Rose) “We’re going to win this war not by fighting what we hate, but saving what we love.”