The incidence of miracles is far too low these days.
Coincidence is cited now, when “accidents” amaze,
But when it seems that chance is too unlikely an excuse,
We start to dream of destiny and what it might produce.

Call it what you will, my friends: coincidence or fate,
Or more precisely, Providence that makes our courses straight.
Though some may call it all a crock, a universe of chance,
When once you glimpse the grand design, ‘tis more than happenstance.
____________________

Around Christmas, I tend to watch traditional movies I’ve seen a million times (It’s a Wonderful Life, Miracle on 34th Street, The Polar Express, etc.), so I wasn’t sure at first what would be best for the season. Then, I remembered that Serendipity begins and ends at Christmastime, making it a good fit for a Christmas Eve post. Somehow, I thought that most rom coms since the ‘90s just weren’t worth my time, but Serendipity surprised me as a wholly charming and enjoyable member of a genre that deserves a better reputation.

It begins with a classic meet-cute for Jonathan Trager (John Cusack) and Sara Thomas (Kate Beckinsale), both Christmas shoppers after a pair of gloves at Bloomingdale’s. Despite already having partners, there’s an instant connection as they have dessert together at a restaurant called Serendipity 3, and while Jonathan is quick to acknowledge it, Sara is more hesitant and unconvinced that they were “destined” to meet. Using a dollar bill, a book, and an elevator, she decides to test fate a bit too far, and the two potential lovebirds go their separate ways. Fast forward a few years, and both of their relationships have progressed to engagement. Yet, there’s also a gnawing sense of what-could-have-been, and they both decide to search out what might be destiny. 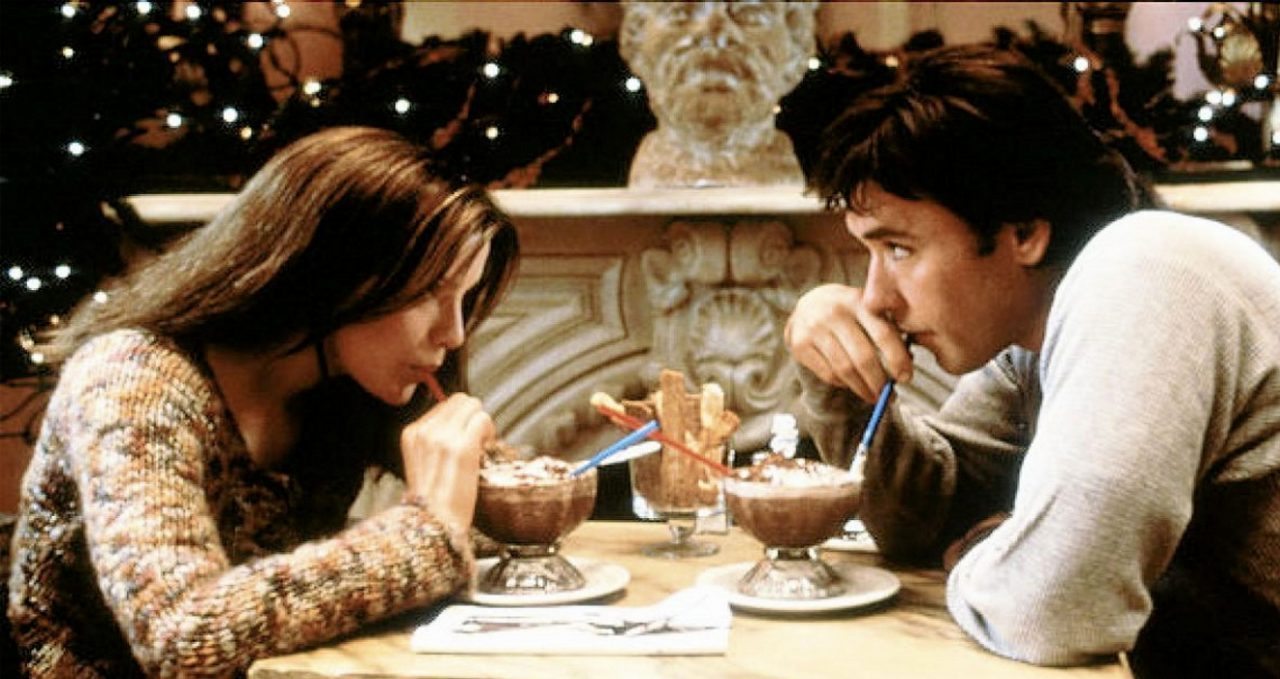 No romantic comedy can be successful without two appealing leads, and Cusack and Beckinsale have marvelous chemistry together, that hard-to-define bond that simply either works or doesn’t. It definitely works here, and I could see how their short time together at the beginning could give them pause on whether this stranger might be “the one.” Beckinsale is lovely as always, though for some reason, even with his sweetly obsessive role in Say Anything, neither I nor my VC thought of Cusack as a romantic lead, yet he affably fills the kind of role that could have gone to Tom Hanks a few years earlier.

The dialogue may not be on the level of Nora Ephron’s, but there’s a good number of chuckles along the way as Jonathan and Kate go on a scavenger hunt for clues as to where their mystery lover might be. Eugene Levy puts in an amusingly offbeat side role, while Jeremy Piven and Molly Shannon are perfect companions in trying to keep the two star-crossed lovers relatively grounded. The themes of fate vs. coincidence are nicely laced throughout as well, sometimes for comedy (“Maybe the absence of signs is a sign!”) but also in more thoughtful ways, especially how the audience gets to see connections and near-misses that the characters don’t.

I wasn’t sure exactly how much I liked Serendipity at first. One minorly major complaint was in how Jonathan and Sara’s other love interests are treated. Usually, this kind of movie shows that the initial relationship is doomed from the start, making the breakup inevitable, but while that is the case with Sara and her weird fluting boyfriend, Jonathan’s alternative girl is a little too viable a match, making me feel sorry for her by the end. I thought that might be a deal-breaker for me in deciding Serendipity’s ranking, but after seeing it a second time with my VC (who also enjoyed it), it’s a minor complaint in an otherwise satisfying romance. Predictable but very watchable, it falls a bit short of my absolute favorite rom coms, but I’ve come to value any movie that leaves me smiling by the end.

Best line: (Jonathan’s friend Dean) “If you want to improve, be content to be thought foolish and stupid.”

A Merry Christmas to all and to all a good night!