Behold! I have been tagged once again, this time by good ole Drew of Drew’s Movie Reviews, who has named me to take part in the Five Flaming Hotties tag. It was created by Catherine of Thoughts All Sorts and Gill from Realweegiemidget Reviews, known as the 2 Reel Quirky Cats, to highlight their biggest on-screen crushes. The rules are as follows:

So then, my top two immediately came to mind, but I had to think long and hard about the others, and it wasn’t easy ranking them either. Everyone has different tastes and preferences that aren’t even explainable sometimes, but these are five lovely ladies that have captured my heart through the screen.

Meg Ryan was the quintessential rom com leading lady of the ‘90s, whether with Billly Crystal or Tom Hanks. Nowhere was her personality and charm so lovable as in You’ve Got Mail, and there’s something about her sweaters and short hair that makes my heart skip a beat. It helps too that she plays a book lover.

Speaking of book lovers, I’m still enamored of Rachel Weisz as Evie in the first two Mummy movies. Sure, she reads undead monsters back to life, but just look at those eyes of hers. Her bookish spunk is enhanced even further by her British accent as well.

When it comes to the mystery-of-the-week series Castle, Nathan Fillion may have been the main draw for female viewers (and Firefly fans), but Stana Katic as Detective Beckett kept the men happy. She’s the perfect combination of competent toughness and flirtatious charm. And she’s gorgeous! I could tell from the start that it wasn’t just the murders that kept Castle around. (Don’t forget she also had a cameo at the end of Quantum of Solace.)

Specifically in: How to Make an American Quilt (1995)

I never thought of Winona Ryder as that beautiful because she had always been the goth girl in Beetlejuice to me, but when I saw her in How to Make an American Quilt, boy, was I smitten! Like Meg Ryan, maybe it’s the short hair I like, but there are few movie characters I remember finding so distinctly attractive as she. The movie itself was fairly good too, but I’d watch it again just for her.

Specifically in: Everything she’s done

Yes, my original celebrity crush wins the day! You can tell from my list of Top Twelve Lindsey Stirling Songs that I’m a big fan of this talented violinist. I’m not sure what I love most about her: the geeky exuberance she pours into her performances, her epic musical talent, her overall sincerity and genuineness. And lucky me, I get to watch her each week as a contestant on this season of Dancing with the Stars. Come on, Lindsey, you can win it!

I couldn’t not mention five runners-up as well, so a very special mention to Audrey Hepburn, Alice Evans, Emma Stone, Brittany Snow, and Diane Kruger too. 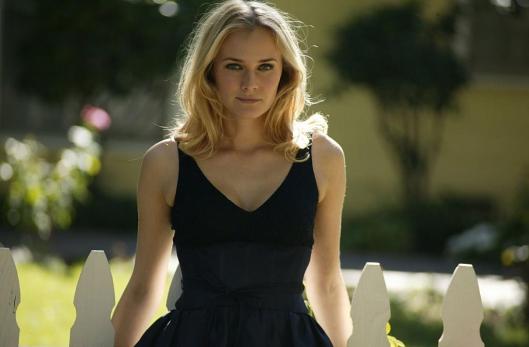 As for my tag-ees, I’ll be nominating the following bloggers (and eagerly awaiting their choices):

Conman at the Movies

Thanks again to Drew for tagging me and giving me an excuse for some eye candy!