Love is hard to pin down –
What it is, where it’s from,
Why it makes you a clown
Or remarkably dumb,
Why it strokes you one minute with gentle caress
And pounds you the next with a cold callousness,
Why it fills you with joy at a memory made
That turns bittersweet as the joyful times fade,
Why it brings you to tears
At the thought of a laugh,
Why the grain is so worth
The abundance of chaff.
No, I can’t explain it, doubt anyone could.
You’ll know when you feel it, the bad and the good.
________________________

Have you ever watched a movie that you can appreciate for everything it does well but still just not connect with it? That was my reaction to Annie Hall. This Best Picture-winning rom com is among Woody Allen’s most iconic films, and I can see why. From innovative storytelling to an insightful script, it deserved acclaim, but I can only offer it so much.

Allen himself plays Alvy Singer, a neurotic Jewish comedian, who after a couple failed marriages, falls for the offbeat beauty Annie Hall (Diane Keaton), with whom he shares a rollercoaster of a romance. The longer I watched Annie Hall, the more a thought continued to grow in my mind: “This is just like (500) Days of Summer!” Sure, Alvy has little in common with Joseph Gordon-Levitt’s character in that much later film, but there were so many parallels: the non-linear storyline, the quirky girlfriend, the occasional use of split-screen, the digressions with unconventional styles (an animated sidebar here vs the musical number in the other), the ultimate depression as a once happy romance peters out. The 2009 film is practically a remake, though not exactly, sort of how I felt about the plot similarities between Hidden and A Quiet Place. 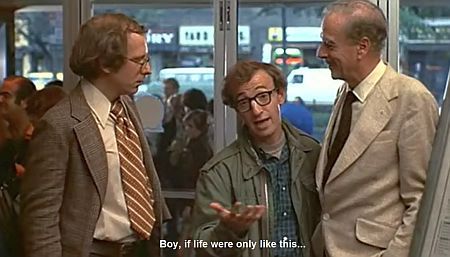 Annie Hall has so many creative choices that just feel unique and revolutionary even, such as Alvy repeatedly breaking the fourth wall, the visual representation of how a lover feels distant, characters’ inner thoughts being shown as subtitles to contrast with what they’re saying, or his discussions with random people on the street as if they were parts of his subconscious. And then there were the plethora of cameos, from Paul Simon and Carol Kane in larger roles to Christopher Walken used for a one-off gag, not to mention certain stars who had yet to become famous, like Jeff Goldblum, John Glover, and Sigourney Weaver.

And yet, for all those strengths that I enjoyed, I was left feeling oddly cold. For the film being considered the 4th greatest comedy by AFI, I recall a chuckle here and there but no big laughs; it was full of lines where I didn’t laugh but instead thought, “That’s humorous,” which doesn’t seem like what a comedy should do. Perhaps it was the presence of Woody Allen himself. His overly neurotic Alvy, obsessed with death and Jewish discrimination, is quite a character, but I couldn’t stand to be around someone like him in real life. Plus, there’s the mental baggage of the real-life Allen and the scandalous allegations surrounding him. My VC says he makes her skin crawl and didn’t enjoy the film because of him; the only film with him she rather liked was The Curse of the Jade Scorpion, in which he’s constantly disparaged.

So, I guess I can count Annie Hall with so many other classics that just didn’t quite live up to expectations, right alongside the likes of The Third Man and The Philadelphia Story. I can appreciate it for its groundbreaking eccentricities, but when I consider that it won Best Picture over Star Wars, I just have to shake my head. Considering all the things I liked in Annie Hall, I just thought I would like the whole package more.