Periodically, I like to delve into a series that I’ve unconsciously avoided until now, and I’ve largely enjoyed past explorations of franchises like Mission: Impossible or the Riddick trilogy. So then it’s finally time to investigate the Fast and Furious movies, a series that has surprisingly risen from “that little series about car racing” to a huge blockbuster phenomenon. I’m wondering what the hubbub is about, so I’ll be watching all nine films in the franchise to see just what has made it so wildly popular. 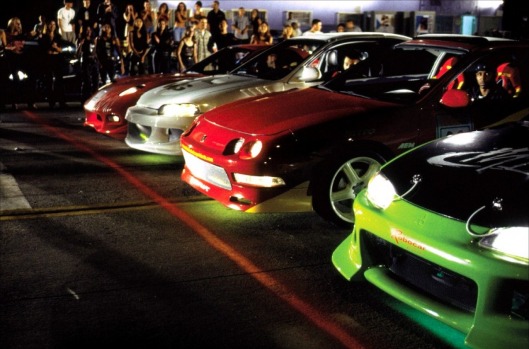 So what of the very first movie from 2001, the one with the “the”s in its title? Is it the kind of innovative kickoff film that promised big things ahead? Um, no, I would not go that far. The Fast and the Furious is a right decent action movie, in which undercover cop Brian O’Conner (Paul Walker) infiltrates LA’s illegal street racing scene and the crew of racer Dominic Toretto (Vin Diesel), who might be behind a rash of recent high-speed robberies. I can’t fault Walker and Diesel, the former full of cautious self-confidence and the latter boasting an intense glare to match his skills behind the wheel.

The problem is that The Fast and the Furious follows the exact formula of Point Break, just substituting driving for surfing and comes up short in most respects. And by the open-ended conclusion, the attempts at character development just don’t quite justify Brian’s sympathy for Toretto, making the cop’s actions a bit puzzling. Plus, I just have very little interest in cars that go vroom, so I’m sure I’m not the target audience for this kind of movie. Even so, do feminists not have a problem with how women are portrayed here? It was nice to see Michelle Rodriguez (Lost alert!) as Dom’s girlfriend Letty, who gets a few moments to be cool, but women here are mostly little more than trophies and hood ornaments for the swaggering male drivers, which was a turnoff for me and my VC (my Viewing Companion, who happens to be female), though it plays into the comparison to exploitation films that other reviews have made.

The high-speed chases are entertaining and I’ll keep watching, but right now, it’s hard to imagine a decades-spanning franchise based on this film alone. I understand that the scope of the series changes around the fifth movie, so I’m curious to see what that looks like. Stay tuned.

Best line: (Dom) “Ask any racer. Any real racer. It don’t matter if you win by an inch or a mile. Winning’s winning.”