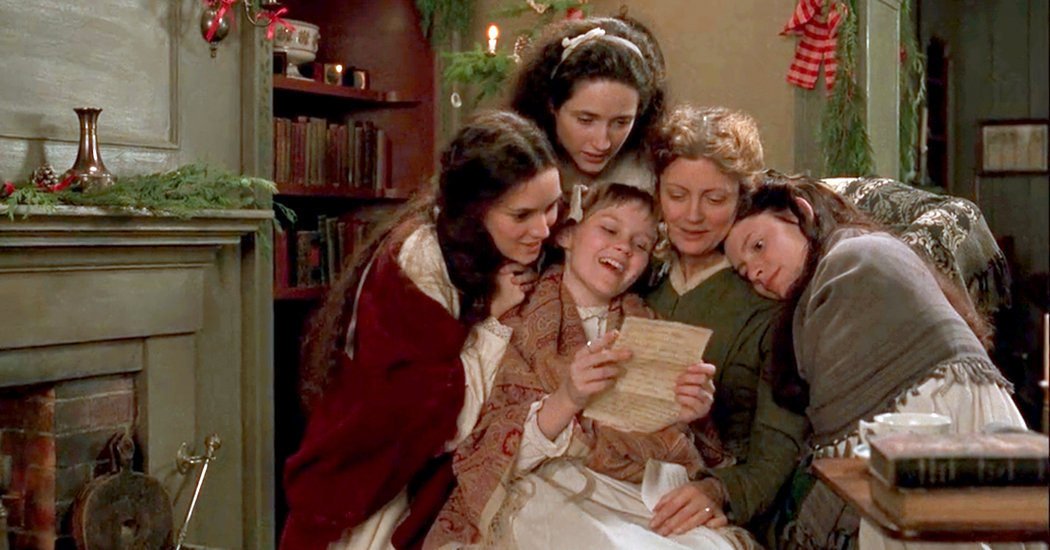 (Today’s NaPoWriMo prompt was for a poem about flowers taking on certain meanings, so I decided to compare flowers with the little women of this film.)

A family of daughters is like a bouquet
Of flowers, all different, that brighten the day.

The rose offers beauty and layers of grace,
With thorns to keep those who would pluck in their place.

The daisy seems simple, but as you look nearer,
Complexity waits for the few who revere her.

The lily looks shy with its petals locked tight
But opens up wide when it knows love and light.

And baby’s breath sighs with its placeholder status
Yet binds us all close in an elegant lattice.

After thoroughly loving Greta Gerwig’s most recent adaptation of Louisa May Alcott’s novel, I had to check out 1994’s similarly acclaimed version from Gillian Armstrong. With such a classic story and relatable characters, it’s clearly hard to go wrong, since this also proved to be a wonderful rendition, even if it didn’t quite match its most recent sister.

The ensemble is full of stars in their prime in the ‘90s: Winona Ryder as Jo, Kirsten Dunst (and later Samantha Mathis) as Amy, Claire Danes as Beth, Trini Alvarado (of Paulie) as Meg, Susan Sarandon as Marmee, and Christian Bale as Laurie, not to mention Gabriel Byrne, Eric Stoltz, and Mary Wickes as well. Unlike Gerwig’s non-linear narrative, jumping back and forth across a four-year gap, this version plays its events in order, which is easier to follow as the March sisters grow up, finding love, heartache, and joy along the way.

So how do the two versions compare? Over and over, I recognized scenes and interactions (which obviously means they came from the book), and I liked them here but couldn’t help preferring the more recent film’s take on them, which might have been reversed if I’d seen this version first. Much of the dialogue that I so loved in the 2019 film wasn’t the same here, a testament to Gerwig’s contribution, yet I still appreciated its simple, often humorous elegance. Individual characters were harder to decide on. Meryl Streep was certainly a more memorable Aunt March than Wickes was. Winona Ryder and Saorsie Ronan are evenly matched as Jo, considering I have a crush on both, but I thought Christian Bale made a more sympathetic Laurie than Timothée Chalamet. Likewise, Friedrich and Jo’s relationship felt slightly more natural and fleshed out here than in the remake.

I must admit one embarrassing thing. I kept being confused by certain differences I viewed as creative choices. Why did they keep giving Beth’s actions to Amy? Only halfway through did I realize I had Beth and Amy mixed up, thanks largely to the casting of the 2019 film. In that one, Florence Pugh plays both the younger and older Amy, but because she looks and is older than Eliza Scanlen as Beth, I thought Amy was the third eldest of the girls, which threw me off when 12-year-old Kirsten Dunst’s Amy was clearly the youngest in the 1994 film. It’s hard to say which is the better option, though. In this film, I thought that the replacement of Dunst with Mathis after the 4-year gap sapped some of the bond formed with Amy, so I can see why keeping the same actress might be desirable, if slightly confusing for people like me. I should really just read the novel.

Ultimately, I loved both versions because they both bring this story to life in a brilliantly traditional way. So many 19th-century period pieces are centered in Victorian England or focus on some war or significant historical event, so it’s a rare treat to glimpse into the everyday lives of Americans from this time. I may be partial to Gerwig’s incarnation, but both films share a stellar cast and engaging wholesomeness that are equally refreshing.

Best line: (Jo, after Laurie proposes) “Neither of us can keep our temper…”
(Laurie) “I can, unless provoked.”
(Jo) “We’re both stupidly stubborn, especially you. We’d only quarrel!”
(Laurie) “I wouldn’t!”
(Jo) “You can’t even propose without quarreling.”