Whenever some genius succeeds in inventing a teleportation device,
Whoever created it ought to be wary and test the darn thing at least twice.
For things can go well in initial experiments; but, due to bug or pollutant,
It only takes one time for things to go wrong, and next thing you know, you’re a mutant.
_________________________

Remakes often get a bad reputation, but certain remakes are more well-known than the original. Although I haven’t seen all of it, the original version of The Fly has that famous scene of a woman screaming into the compound eyes of a fly-headed scientist. Yet I’ll bet most people think of Jeff Goldblum before anything else in the 1958 film (except maybe the high-pitched “Help me! Help me” scene). That’s probably because David Cronenberg’s version of The Fly is extremely… memorable, one of the great gross-out flicks that still carries something of a message in its extreme body horror. 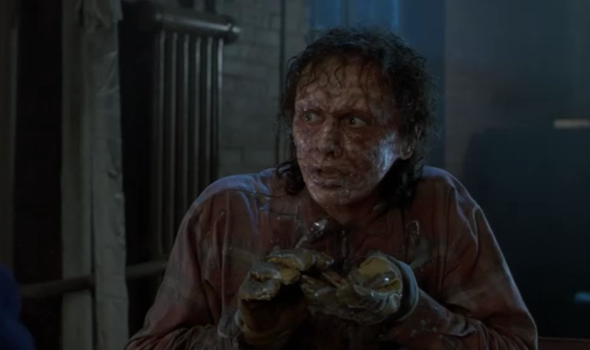 The Fly works well because of its gradual nature. Goldblum’s Seth Brundle, a scientist working out of a deserted warehouse, proudly shows attractive journalist Ronnie Quaife (Geena Davis) what he’s been working on, a pair of teleportation pods. They’re unfinished, though, and despite the horrific results of testing it on a baboon, he perseveres until he believes it safe for human testing. Spoiler alert: it’s not. Whereas the original film had an immediate head-and-arm swap between the man and the fly inside the telepod, Brundle’s transformation is gradual, taking a while for him to realize what went horribly wrong, and the results are anything but pretty.

The transmogrification of Seth Brundle is a pitiful sight, and Goldblum succeeds in exposing the character’s initial hubris and later desperation, even while being covered in more and more disfiguring makeup. Comparisons with unstoppable diseases like cancer or leprosy are unmistakable. One scene felt like a precursor to a similar scene in Prometheus that I’ve always found deeply disturbing. And then there are the final scenes, in which the visual effects and Oscar-winning makeup make the most of a gruesome finale. The ending is a bit too abrupt, not unlike An American Werewolf in London, but it has staying power, haunting the brain and keeping the heartbeat elevated even after the credits roll.

My VC thinks this is possibly Jeff Goldblum’s best role, but I’m still surprised that she recommended this movie, considering she is far from a fan of shock horror, and neither am I. Still, The Fly felt like a higher form of it, one that’s hard to ignore. It was also a nice surprise when I was reminded that the famous line below originated in this film. If you don’t enjoy grotesque imagery, The Fly is not for you, but if you can stomach some for the sake of compelling sci-fi, it’s a classic of its genre.

Best line: (Ronnie, to a potential victim of Seth’s) “No. Be afraid. Be very afraid.”