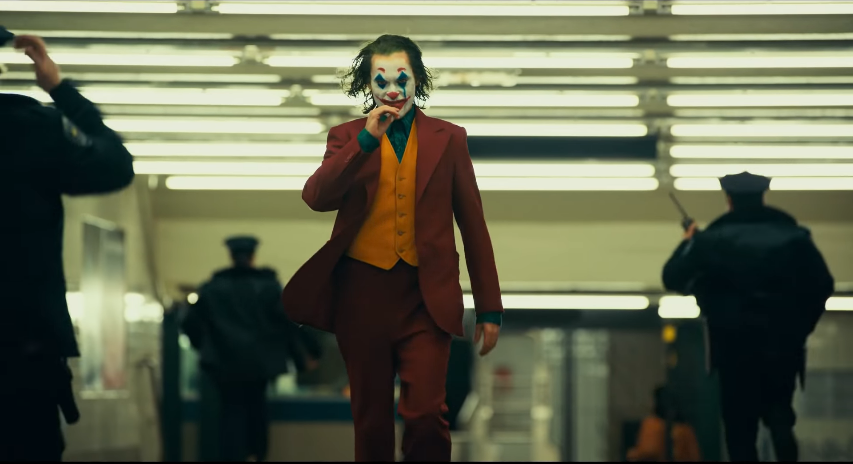 The ills of this world sit upon a low shelf
Of only concerning the cares of one’s self:
My money, my job, my family and time,
My needs of the moment, my mountain to climb;
My headaches are worse and my schedule more pressing
Than all of the others who likewise are stressing.
It’s such a low shelf that we reach it with ease,
For selfishness is everyone’s expertise.
_____________________________

If it wasn’t for the cultural fervor over it and the Best Picture nomination, I probably wouldn’t have sought out Joker, certainly not in the theater. From the trailers, it looked like one of those dark, society-blaming screeds about cruelty breeding more cruelty, which isn’t the kind of movie I enjoy. Yet friends of mine praised it and urged me to watch it with an open mind, so I did. On the one hand, it was exactly what I was expecting, and on the other, it held more depth than I expected, buoyed by Joaquin Phoenix’s committed, Oscar-winning performance.

We’ve already had three big-screen versions of the Joker, two outstanding and definitive (Nicholson and Ledger) and one mostly meh (Leto), not to mention the host of animated incarnations, so it’s impressive alone that the filmmakers were able to put their own stamp on this much-rebooted character, much less win a second Oscar for the role (after Ledger’s posthumous Supporting Actor win). Set in the yellow-tinged urban decay of 1981 Gotham City, Joker forgoes superpowers or vats of acid in favor of a psychological profile of a broken man. Arthur Fleck is a socially awkward clown-for-hire and wannabe comedian, an easy target and scapegoat for unkind strangers and acquaintances, who also suffers from a condition that causes him to laugh uncontrollably at inappropriate times. His only relationship to speak of is with his aging mother (Frances Conroy), but he tries to make a connection with a caring neighbor (Zazie Beetz). When a late-night subway ride turns deadly, his fragile psyche begins a mental spiral into violence with plenty of blame to go around.

As I said, Joker was, in many ways, exactly the kind of movie I wasn’t looking forward to watching. There’s no hero to root for, no answer to the deep-seated societal flaws laid bare, and, by the end, what little hope and sympathy that graced Arthur’s life deserts him, replaced by a nihilistic anger that paints Joker as an unholy champion of class rage and rebellion. Yet at the same time, it makes its points effectively. Pitiful in every sense, Arthur was definitely mentally ill from the start, but there are multiple times where other people’s treatment of him could have gone two ways and usually takes the crueler route, only feeding the inevitability of his breakdown. If it takes a village to raise a child, it also takes one to bring them as low as Fleck does.

There’s a reason I reviewed Joker so soon after A Beautiful Day in the Neighborhood. Despite their vast differences, it fascinates me that both sparked the same feeling within me, namely the desire to be a better person. Mr. Rogers was the epitome of human kindness and consideration, while Joker is the product of their complete absence, taken to the extreme. Together, the two films show what wonderful things can come from goodwill and forgiveness versus what terrible things can happen when they are withheld. Empathy can change perceptions and transform lives, but its power is most evident when it’s gone.

It’s interesting how Joker almost seemed to lean into similarities with maligned scenes from other superhero films, like the dancing scene from Spider-Man 3 becoming a now iconic dance down some stairs in the Bronx. (I can see the filmmakers saying, “Remember that ridiculous scene? Let’s do something like that but dark and metaphorical.”) It’s hard to see how this gritty and grounded drama could lead to the DC world of Batman and other heroes, even with a direct tie-in to Bruce Wayne’s origin story. Phoenix’s Joker, gaunt and middle-aged, is clearly not the same Joker a modern-day Batman would face, but he certainly could have inspired a more diabolical copycat in the years to come. Time will tell if they explore that possibility with any success.

Despite its perceptive, even eloquent dive into a desperate mind, I don’t think I’ll ever feel the desire to watch Joker again, but I can admit its cultural timeliness, even if I disagree with its unsubtle class warfare themes. It’s a film to appreciate, to appraise, not to like. Between Phoenix’s Oscar-caliber theatrics and the caustic social grievance that fuels it (plus Hildur Guðnadóttir’s powerful, Oscar-winning score), Joker has cinematic quality to spare, but its moral hollowness is too disturbing to ignore.

Best line: (Arthur) “How ’bout another joke, Murray? What do you get when you cross a mentally ill loner with a society that abandons him and treats him like trash? I’ll tell you what you get! You get what you f***in’ deserve!”