Drama, Meet 'em and Move on

The money that rolls from the printers of mints
Is not unlike people who leave fingerprints.
Each purchase takes part in a life barely known;
Each bill changing hands is a seed that is sown,
And what will grow from it, for good or for ill,
Depends on the spender, as always it will.
_____________________

MPAA rating: R (for language and an extended scene of nudity)

Despite repeatedly falling behind on my Blindspot list this year, I am officially caught up and finishing right on time! I don’t know how Twenty Bucks ended up being the last movie to watch, since I’ve had a curiosity about it for some time. As many of you might know, I’m quite partial to what I call Meet-‘Em-And-Move-On films, where we follow one person as others float in and out of their life (think Forrest Gump and Mr. Holland’s Opus). Twenty Bucks is exactly that kind of movie I so enjoy, with the difference of following an object, a $20 bill that is passed around through various people’s stories. 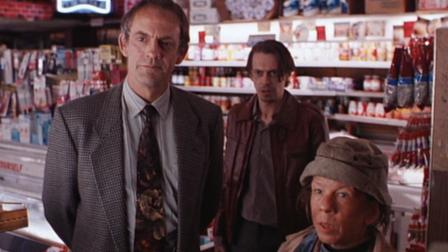 There is no one main plot, but certain individuals matter more than others based on time spent with them and whether they pop up again later, including Brendan Fraser as an engaged man with poor judgment, Elizabeth Shue as an aspiring writer, Linda Hunt as a homeless lady desperate for a lotto ticket, and Christopher Lloyd and Steve Buscemi as a pair of small-time convenience store crooks. There’s a fun sense of chance, irony, and serendipity as the bill changes hands and incurs increasing damage from the surprisingly large and recognizable ensemble, which also includes Gladys Knight, William H. Macy, Matt Frewer, and David Schwimmer, all of whom do well with their limited screen time, especially Lloyd as a cool and professional criminal.

I must admit that, when it was over, I wasn’t instantly in love with Twenty Bucks. The circuitous plot and some characters’ strange decisions kept me appreciating the film at a distance, which wasn’t helped by an explicit and far too long nude scene. Given a couple days’ retrospect, though, my regard for the film has grown. At times, it wasn’t always clear how the stories would intersect or how the $20 bill would connect them, but that only served to hold my interest, and some of the connections weren’t made clear to me until the credits rolled. My natural appreciation for the genre has strengthened my fondness for this particular entry, and I liked how each story served as an example of what money could mean to different people: something to ruin relationships, something to threaten or kill for, something to pass on to your children, something to pin all your hopes and dreams on, and so forth.

As described in a behind-the-scenes featurette I saw, the screenplay for Twenty Bucks apparently originated from writer Leslie Bohem’s father, who penned a version of it back in 1935, and this film was an effort to resurrect this kind of follow-the-object movie that had been popular back then. (I’ll have to check out some of those ‘30s films that I’d never heard about before.) It does make me wonder what this movie might have looked like if it were filmed at that time, minus the objectionable elements, but Twenty Bucks still proved to be a largely enjoyable incarnation of my favorite sub-genre and a good cap-off to this year’s Blindspot selections. It doesn’t match The Red Violin, which is still my favorite follow-the-object film I’ve seen, but it makes me wish more such movies would be made.