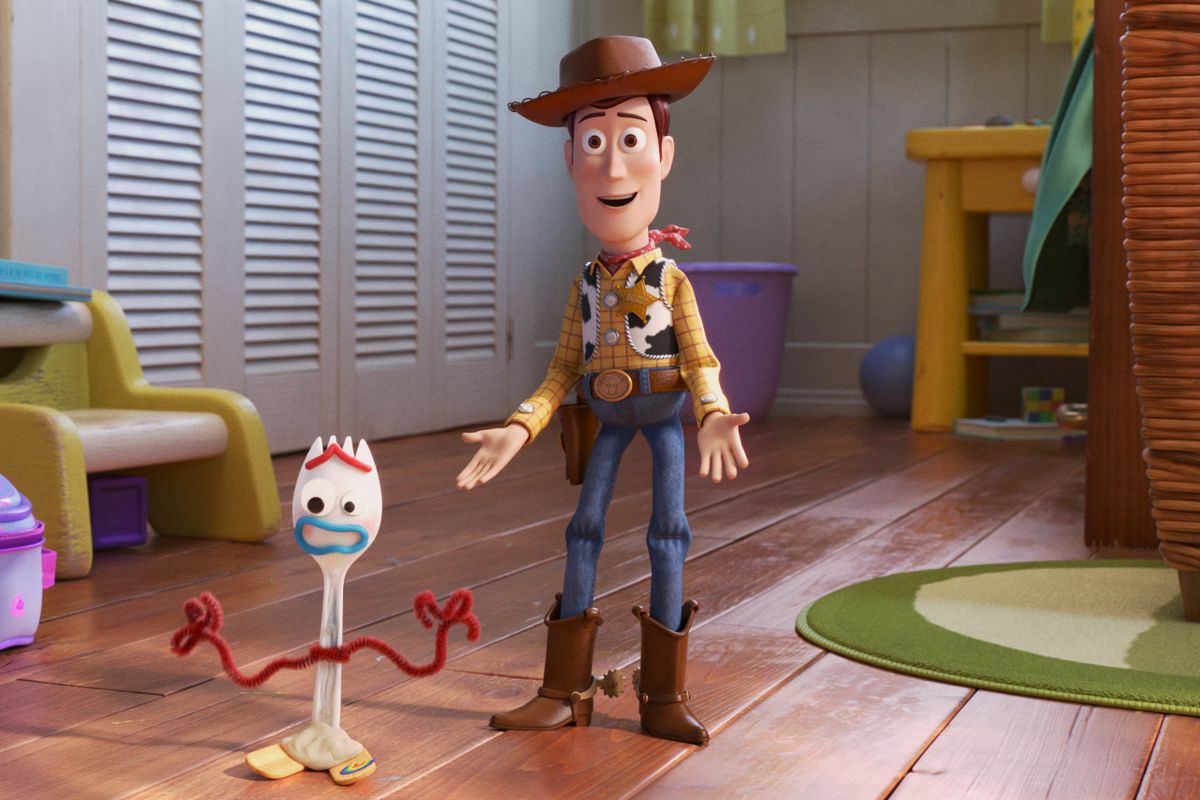 The life that you pour into somebody else’s
Is just as much fuel as a life for one’s self is,
A reason to get up each morning, assured
That you have a purpose by which you are spurred.

But what of the time when the mission is done,
The journey completed, the races well-run?
When nobody needs you and life seems bereft,
What purpose remains here? What journeys are left?

I’m sure I wasn’t alone in my groan when Toy Story 4 was announced. Toy Story 3 ended the series with such a definitively satisfying conclusion, being handed off from college-bound Andy to little Bonnie, that I just wanted Pixar to leave it there. A cute little short would pop up occasionally, and I kept wishing they would leave the characters alone. No more sequels, or, Lord help us, a remake! Yet Pixar has pulled off the unlikely so many times before that there was no way they were going to screw up their best franchise. Toy Story 4 still feels unnecessary, but it’s a sweet epilogue to Woody and Buzz’s story. 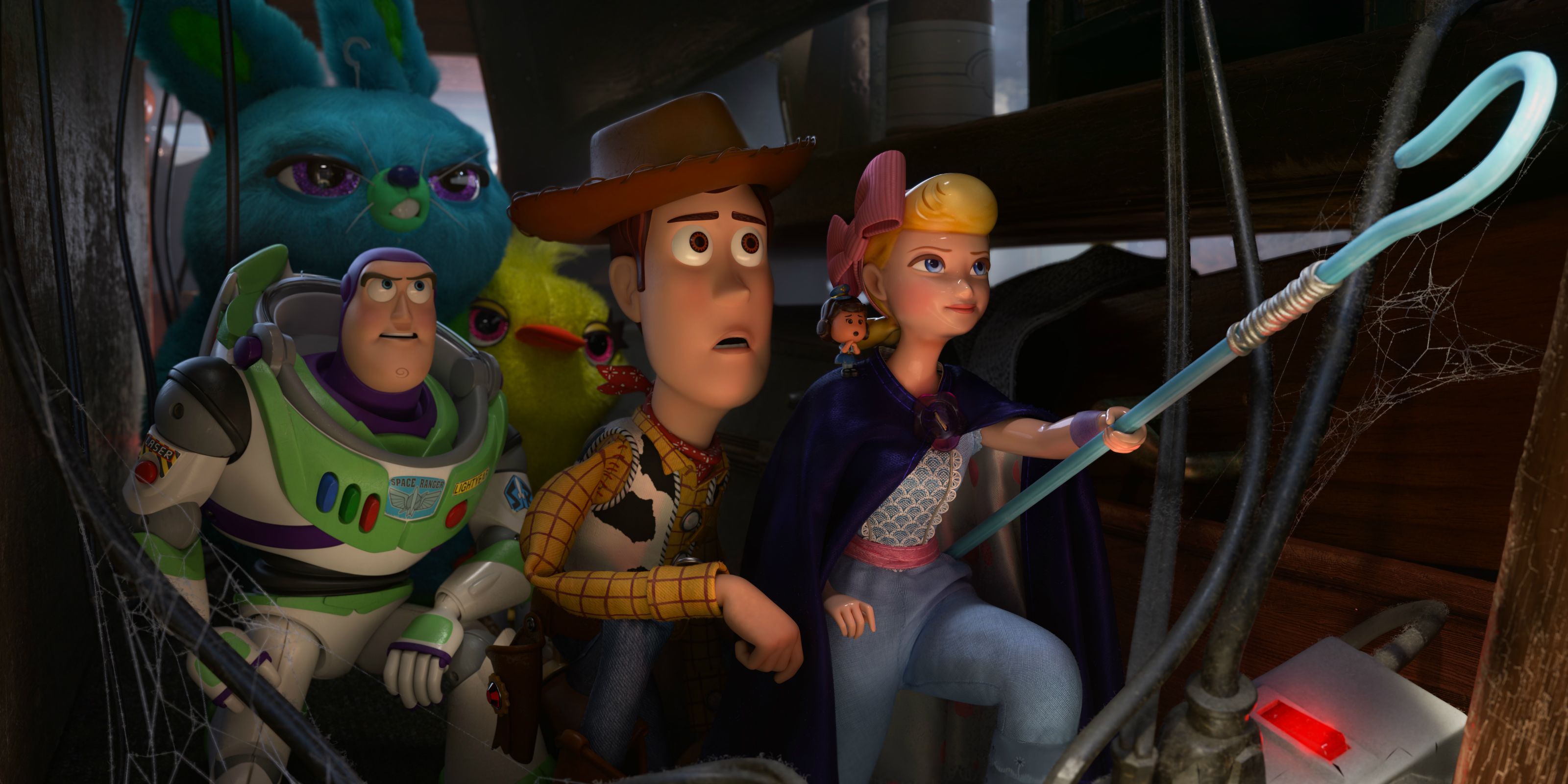 The Toy Story films have always thrived off their diverse cast of toy characters, and Toy Story 4 still does, joined by a collection of hilarious and welcome additions, but this particular tale is clearly meant to offer full-circle closure for Woody (Tom Hanks). The cowboy doll was always Andy’s favorite, and it’s no surprise that he’s lost that status in Bonnie’s room, yet he finds new purpose in protecting her newest friend, a googly-eyed spork she crafts and names Forky (Tony Hale). Being made of trash, Forky only sees himself as something to be thrown away, yet Woody strives to get the cobbled-together toy to see his own value, running into more than their fair share of trouble when the two are separated from Bonnie during a road trip.

In addition to new characters ranging from a Canadian stuntman plagued by self-doubt (Keanu Reeves) to a pair of plush carnival toys named Ducky and Bunny (Jordan Peele and Keegan-Michael Key), Woody is reunited with Bo Peep (Annie Potts), whom we get to learn much more about than in the first two films. The main change, which is practically a retcon, is that she’s a natural, daring leader who’s grown beyond needing the love of a single child. (I also learned she and her sheep were part of a lamp. Did I just not notice that before?) Also new to the cast is the genteel doll Gabby Gabby (Christina Hendricks), whose deep-seated neediness casts her in the role of villain, though the movie presents her with far more empathy than the other films’ antagonists, to the point of offering her redemption without so much as an apology to earn it (something I only realized after reading another review). Bo offers Woody an alternative to his desperate attempts to stay relevant, and I felt like this conflict resulted in some mixed messages. There’s a clear parallel between the toys watching their kids outgrow them and the empty-nest anxiety of parents, so it’s a worthwhile lesson that life doesn’t have to end once “the mission” is complete, that one can find another purpose. Yet with Woody’s repeated pleas throughout the series that “Andy/Bonnie needs us,” it vaguely feels by the end that he’s contradicting the loyalty he’s instilled in everyone else. My VC was more bothered by the end than I was, but it is a complication worth pointing out.

Yet for all these philosophical holes poked in the plot, the world and players of Toy Story never fail to entertain and remain as lovable now as they were back in 1995. With the spotlight so much on Woody, much of the extended cast, like Rex, Hamm, and Slinky, don’t get much screen time, but that doesn’t diminish the entertainment factor. (P.S. Ducky and Bunny are hilarious.) In some ways, the plot mishmashes elements from the other three films, yet it still bears that Pixar polish and lump-in-throat sweetness that never gets old.

I hope that Pixar has now finally gotten the need for an epilogue out of their system and can let Toy Story rest in peace. Toy Story 4 is easily the least of the bunch and not quite as good an ending as the third film, but it still satisfies, as well as dwarfs most other animated fare these days. All good things come to an end, or should, Toy Story included.

Best line: (Trixie) “I have a question. No, wait. I have all the questions.” [As someone with a reputation for asking questions ad nauseum in any class, this line spoke to me.]