(Best sung to “Lola” by The Kinks)

I’m not the world’s most observant guy,
So I lost a lot of money, and I’m gonna die,
But for Lola, Lo-lo-lo-lo-lola.

She ran across town to fix my mistake,
Since I dropped about a hundred thousand, give or take,
Lots o’ moolah, moo-moo-moo-moo-moolah.

Only twenty minutes left to recover it,
So we might have had a better chance surviving spit
With ebola, bo-bo-bo-bo-bola.

Luckily for me, she can run really fast,
And possibly replay what happened in the past,
That’s my Lola, Lo-lo-lo-lo-lola.

MPAA rating: R (mainly for language in the subtitles, other content is more PG-13)

I didn’t realize when I chose both Mr. Nobody and Run Lola Run as Blindspots this year that they would end up having so much thematic similarity. And they’re both German, the former an English-language co-production while this film is actually in German. Both have to do with how people’s choices can result in vastly different outcomes, which are presented in an impartial, what-if manner. Yet, whereas Mr. Nobody explored huge, cosmic potential across a lifetime, Run Lola Run deals with a crucial twenty-minute window in the lives of red-haired Lola and her boyfriend. 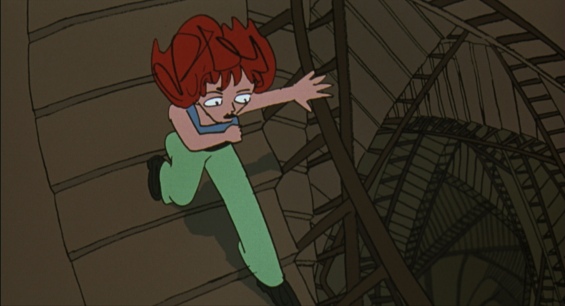 At the most basic level, the events of Run Lola Run (or Lola Rennt in German) are fairly straightforward: Boyfriend Manni (Moritz Bleibtreu) loses 100,000 marks earned from a drug deal and is a goner if he and Lola (Franka Potente) can’t deliver the money within twenty minutes. Yet, as evidenced from the imaginatively animated opening credits sequence, this isn’t your ordinary thriller. While Lola’s running is a constant across each of the three timelines presented, the events play out with vast differences, sometimes based on something as small as distracting a driver at just the right moment. Whether it’s robbing a store or begging Lola’s banker father (Herbert Knaup) for the money, their efforts rarely work out as planned, but it’s as if fate is driving the story at times, allowing the interaction of side characters to determine how everything will play out.

I usually love this kind of butterfly-effect conceit, and I enjoyed Run Lola Run for that aspect, but it felt like something was missing for me. It might be that I didn’t really have a reason to care about the characters except for their desperate circumstances. The plot’s divergences don’t really explain themselves either; each time events start over, there’s some existential pillow talk between Lola and Manni that lets things momentarily slow down, and then it all begins again. In addition, Lola frequently passes people, and a series of still images shows either their past or future. That’s the thing, though; I didn’t know for sure, and it wasn’t clear what changed for that person between the timelines to get such different outcomes.

Such complaints are probably no big deal for people who like to ponder a film’s deeper meaning, but Run Lola Run works better as an inventive thriller than a philosophical treatise and would have benefited from more clarity, like why Lola kept breaking glass with her screams. The finer points aside, though, this film was still a fun ride, and, with its riffing on fate vs. individual choice, I can see why director Tom Tykwer was drawn to co-direct Cloud Atlas fourteen years later. The later film had far more to say and a wider scope to say it, but Run Lola Run felt like an indie step toward bigger things.

Best line: (unseen narrator at the beginning) “Man… probably the most mysterious species on our planet. A mystery of unanswered questions. Who are we? Where do we come from? Where are we going? How do we know what we think we know? Why do we believe anything at all? Countless questions in search of an answer… an answer that will give rise to a new question… and the next answer will give rise to the next question and so on. But, in the end, isn’t it always the same question? And always the same answer?”