The birds in flight
May love their height
And laugh at bounded, grounded man,
But gravity
Can guarantee
That staying low’s a better plan.

Vertigo has to be the most critically lauded among my Blindspots this year, and I was quite curious to see whether it would match its reputation, since so many Hitchcock movies have fallen short, for me at least. Vertigo lands somewhere in the middle, confirming my opinion that Hitchcock mostly excelled in creating tension in individual scenes rather than whole movies. 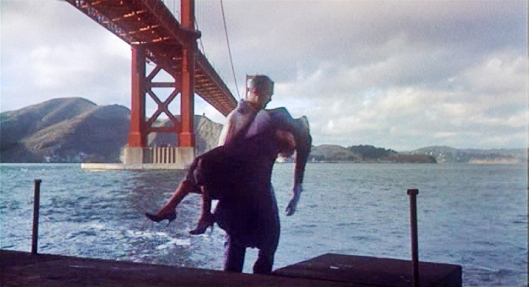 The fourth and last collaboration between Hitchcock and star Jimmy Stewart, Vertigo is a tale of obsession that toys with the possibility of the supernatural. Stewart plays John “Scottie” Ferguson, a cop who retired after a deadly experience with heights but is commissioned by wealthy friend Gavin Elster (Tom Helmore) to investigate Elster’s wife Madeleine (Kim Novak) and her sudden strange behavior. As he learns more about her connection to a suicidal ancestor and develops a relationship with her, he encounters secrets and mysteries that shake him to his core.

As a fan of film, I can say that I am definitively glad to have finally seen this classic of cinema, an oversight that represents exactly what this Blindspot series is meant to solve. Yet it doesn’t hold the same fascination for me that it apparently does for so many. Perhaps it’s because the film’s intrigue was such a rollercoaster. It starts out interesting enough with Stewart as his ever-likable self, but the story really drags during his investigation, which consists of far too much of him wordlessly following Madeleine by car. Maybe it’s just me, but the picture below doesn’t do much for me in the way of tension.

Then comes a famous scene in a bell tower, which is indeed one of Hitchcock’s best for buildup and shock value. Not too much longer, and the reveal of the mystery left my brain working overtime, surprised at the unanticipated twist and giving me a new appreciation for the storyline. Yet what follows becomes a somewhat uncomfortable exercise in obsessive grief (including a weirdly unnecessary psychedelic dream), played out through what would be a deeply unhealthy relationship if not for the audience’s knowledge of its psychological underpinnings. How it ends, while effective, is also anything but satisfying, so abrupt that it made me recall how much I despise the final scenes in North by Northwest and An American Werewolf in London. I know Hitchcock knew how to end a movie, but I wouldn’t know it based on this one.

I certainly can’t fault the actors. Stewart is always good, always, and Kim Novak might be one of my favorites of Hitchcock’s blonde leading ladies. Barbara Bel Geddes is also great as Scottie’s casual friend/former crush, who is short-changed by the ending’s lack of closure. I also liked a cameo by Ellen Corby, who also appeared with Stewart briefly in It’s a Wonderful Life (“Could I have $17.50?”) Likewise, Bernard Herrmann’s hypnotic score is an outstanding accompaniment, and, like the score of Psycho, adds so much to the film’s atmosphere.

All in all, Vertigo is the second best one-word Hitchcock film that ends with an O, as well as the second best Hitchcock film that begins with an injured Jimmy Stewart. Sorry if that doesn’t sound like high praise, though I do appreciate its cinematic contribution of that vertigo effect above. I can see why film enthusiasts like it and why its filming locations around San Francisco have become iconic, and I have half a mind to see it again just to pick up on the hints to the twist that I might have missed the first time. Yet, considering it’s been ranked both 1st and 9th on lists of the best films ever made, I feel like its reputation is somewhat overblown. Psycho is still Hitchcock’s masterpiece as far as I’m concerned.

Best line: (Madeleine) “Only one is a wanderer; two together are always going somewhere. ”