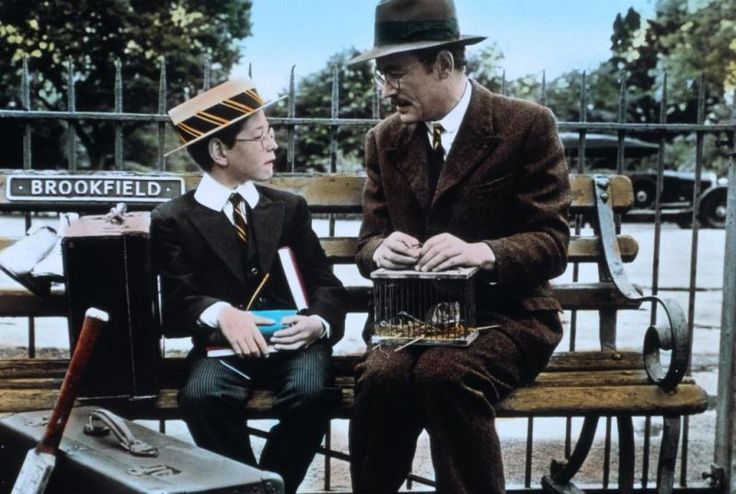 A young boy’s mind is a fallow field
With unknown promise yet to yield,
And every word their minds import
Of criticism or support,
Of firm reproof or merely sport,
Contributes to the man revealed
At last when boyhood is cut short.

To nobly tend this field with care,
Since parents can’t be always there,
Requires a person resolute,
Profuse with passion, temper mute,
With love of learning absolute.
Such people tasting praise is rare,
But they produce the finest fruit.
_____________________

Those who’ve seen my Top 365 movie list might know that I love Mr. Holland’s Opus.  I’ve just always been drawn to the story of an unassuming teacher finding worth in the service of his students.  I’ve always vaguely known that 1939’s Goodbye, Mr. Chips, based on a 1934 novella, was the original version of such a story, but I’d never gotten around to seeing it. When I then learned it had been remade as a musical in 1969, I figured it would be a prime chance to compare the two in one of my overdue Version Variation posts.

The first Goodbye, Mr. Chips is known as one of the members of the great movie year of 1939, managing to win Robert Donat the Best Actor Oscar over some stiff competition, including Clark Gable in Gone with the Wind. Having seen the winning performance, I can now see why Donat edged out the rest, letting his range of sometimes inscrutable emotions play out with great subtlety as he ages from a fresh-faced new Latin teacher in 1870 to a celebrated educator in 1933, weighed down with all the joys and sorrows of a lifetime. (My VC enjoyed the film a lot, but as a huge Rhett Butler fan, her loyalties still lie with Gable.) Like Mr. Holland, the respect Mr. Chipping ends up with is hard-won, but much of it stems from his marriage to the lovely Kathy Ellis (Greer Garson), whom he meets on a European holiday. I would have loved for Garson’s role to have been longer, but, even with limited screen time, her warm presence successfully brings the prosaic Chipping out of his shell, improving his reputation at the school.

In many ways, Goodbye, Mr. Chips is exactly the kind of movie I like, a film spanning decades wherein one character meets various people and experiences alongside the ebb and flow of time, fostering a sense of fond nostalgia. I particularly liked his run-ins with successive generations of the Colley family, showing how static his life at school is while his students go on to have lives of their own. Mr. Holland’s Opus had some similarities, but whereas that film allowed time for characters to be eventually remembered, the turnaround in Goodbye, Mr. Chips is sometimes too fast, introducing a character only for us to learn what happened to them years later in a few minutes’ time. Ultimately, Goodbye, Mr. Chips is well-deserving of its classic status, and while there’s no danger of it supplanting my preference for Mr. Holland’s Opus, it was wonderful seeing a forerunner of a story I’ve come to love.

And then there’s the 1969 remake with Peter O’Toole and Petula Clark, which fits into the not-so-modern sentiment that remakes hardly ever match the original. There’s nothing wrong with making it a musical, allowing the songs to mainly serve as interior monologues, but the songs are largely forgettable, except for a couple clever lyrics, and O’Toole just isn’t much of a singer, trying out the Rex Harrison method of talk-singing but less successfully.

The plot has the same basic elements: Chipping is a somewhat unpopular Latin teacher at a boys’ school who meets and marries a girl named Katherine (Clark) and eventually becomes a mainstay of the institution. There are still the lines of boys sounding off their attendance and a very similar ending, but the filmmakers made significant plot changes elsewhere. For one, the time period is moved up, no longer starting in the 1800s but in the 1920s with Chipping already an established teacher; thus, the war he experiences is World War II rather than World War I.

The worst change, though, is that Katherine is no longer a cycling suffragette Chips meets on a mountain but a music hall singer with an unsavory past, and their formerly brief courtship takes up the entire first half of the film, which also features an intermission to pad out its greater length. There’s pushback against their marriage where there was none before, along with Roaring ’20s parties and O’Toole’s wife-at-the-time Siân Phillips as an annoying socialite. I know I said that I wished Chipping’s wife was in the original more, but I was referring to Greer Garson’s version; the writers of the remake essentially rewrote her whole character, and while Petula Clark was great in the role, it was such a weirdly unnecessary change from the original.

Even so, the latter half (or really third) of the film is much more similar to the first film and is better for it. O’Toole and Clark do well with their roles (O’Toole even got an Oscar nomination and won a Golden Globe), although O’Toole’s Chipping is slightly more stiff and crotchety, even in scenes supposed to be romantic. The film overall was solid enough, but, as with so many remakes, it just doesn’t compare with the original.

I guess films about long-suffering teachers who touch the lives of their students just naturally appeal to me, and Goodbye, Mr. Chips, whatever the incarnation, fits that mold. The original is clearly the better of the two, though, and certainly the one I’d recommend first. While the scene wasn’t in the 1939 movie, I couldn’t help but recall Mr. Holland’s Opus when the second film’s Kathy organizes a school musical with the students, which made me wonder how much either version of Goodbye, Mr. Chips really inspired the 1995 film. They’re so different in setting and character, and yet so similar in theme, particularly in their final heartwarming sentiments (see below). I suppose that’s what speaks to me most of all.

Best line (from 1939 film but something similar in both): (Mr. “Chips”) “I thought I heard you saying it was a pity… pity I never had any children. But you’re wrong. I have… thousands of them, thousands of them… and all boys.”