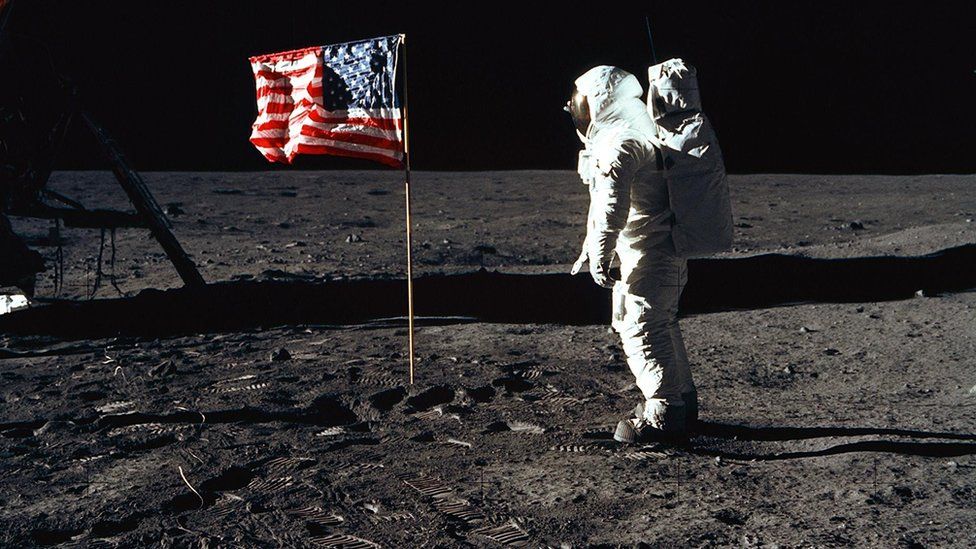 A lonely halo is the moon,
A muse for which romantics croon,
And nobody is quite immune
From such a storied, distant sphere.

Upon its face, mankind has walked,
From which the moon no doubt was shocked,
For how could men have flown and docked
Upon this pioneering pier?

It’s hard to believe that it’s been 50 years to the day since man first landed on the moon. Those familiar with this blog probably already know that my family has a personal connection to the space program, my grandfather having worked for NASA from 1955 to 1973 and my mother working for NASA contractors during the space shuttle program. That personal connection heightens even more my appreciation for the spectacular feat of engineering and cooperation that was the Apollo 11 mission, a mission depicted in several documentaries, two of which seemed perfect to review today.

Both documentaries were released as anniversary retrospectives, 1989’s For All Mankind on the 20th anniversary of the first moon landing, and this year’s Apollo 11 for the 50th anniversary. Both films are entirely archival, made up of actual footage from the Apollo program, though For All Mankind also features voiceovers from interviews with the astronauts. While they both follow the same structure and even share a few of the same shots, both are exceptional in different ways.

Apollo 11 has been making the rounds on TV and theaters, raking in acclaim along the way. It’s an excellent account of the mission, from the monumental launch of the Saturn V rocket as crowds of onlookers marveled from a distance to the tense landing sequence plagued by false alarms. Its best aspect is the visual restoration of the footage, which now lacks any trace of the age inherent to film from 50 years ago. As with Peter Jackson’s They Will Not Grow Old, the footage looks fresh and recent, making every moment feel immediate and much more real than some ancient faded images.

The only drawback for me was how strictly archival the film was, without any narration or sound other than what was filmed. This made several extended scenes of space borderline boring; while the spacecraft’s staggering speeds and dwindling fuel gauge were added for the sake of context and danger (with far-too-small captions), interest definitely depends on how mentally engaged the viewer is, since there isn’t always much happening visually.

Interestingly, after taking 10 years for its assembly and release, For All Mankind had the same issue, originally compiled from old NASA footage without voiceover, only for director Al Reinert to add in interviews based on audience feedback. I thought these interviews added a lot to the film, providing insight directly from those who lived these missions, including Jim Lovell, Michael Collins, and Jack Swigert. You might have noticed that not all of them were on the Apollo 11 mission; that’s because For All Mankind, despite being edited to look like one mission from start to finish, is actually a compilation of all the Apollo moon missions, with a little Gemini thrown in.

The footage may not have the crispness of Apollo 11, but I found that For All Mankind offered far more unique and memorable scenes that I had never seen before: an astronaut making a sandwich in zero gravity, a montage of astronauts playing and repeatedly falling over on the moon, David Scott of Apollo 15 dropping a feather and a hammer to prove Galileo’s theory of gravity correct. I only wish there were some captions or on-screen notes saying which mission each clip was from and which interviewee was speaking during the voiceovers. For All Mankind may not be as detailed as Apollo 11 (the Apollo 13 disaster is glossed over in a matter of minutes), but I thought it offered a more engaging history lesson than the more recent film, ending with a touching tribute to the space program’s casualties, both American and Russian. It’s up there with the best documentaries I’ve seen.

Now fifty from that historic day, it’s equally hard to believe that we haven’t been back to the moon in over 46 years since then. I realize some may view space exploration as an impractical pursuit, but Apollo 11 was an amazing moment in human history, and I sincerely hope that the spirit of dreaming and daring that made it possible will again yield fruit and prove what mankind is capable of accomplishing. In the meantime, we at least have some great documentaries (which I recommend far more than last year’s First Man) to remind us of our past achievements and perhaps renew that same spirit.

Best line, not counting the really famous quotes: (from For All Mankind, summing up how all this was possible) “We are all in this together as a team effort. We’re gonna make it work, and I don’t know how to make it work; I don’t know how to do most of this mission, but I do know that I can assure you that my piece of it is gonna work, and it won’t fail because of me.”

Apollo 11 – One thumb up, one thumb down
For All Mankind – Two thumbs up