Space is a place where dreams are sent,
And there they wait for man’s ascent.
They wait and know that man was meant
To problem-solve, defy, invent,
And once the atmosphere is rent,
They’ll welcome us and our event
And say our effort was well-spent.

Space is a place of ill intent
That never gave man its consent
To test and dare and circumvent
The earth’s frontiers which won’t relent.
It waits to challenge and prevent
Man’s mystifying discontent,
So resolute and heaven-bent.

Having loved La La Land, I was eagerly awaiting director Damien Chazelle’s next feature, especially when I learned it would be about Neil Armstrong and the moon landing. Both my mom and I have a special tie to the space program, since my grandfather worked for NASA and worked on the Apollo missions. When we heard some mixed reviews, we assumed that those naysayers just weren’t very interested in the space program, but our personal connection would be enough to overcome any faults. I wish that were true, because, as much as we wanted to love First Man, it was a bitter disappointment for my family. 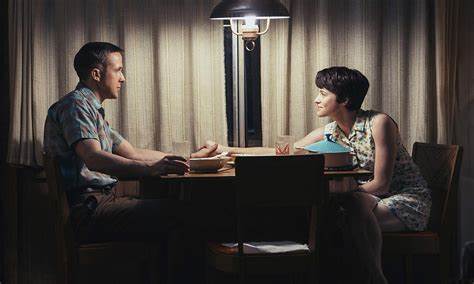 I’ve always enjoyed movies about space, whether it’s Gravity, The Right Stuff, or Apollo 13, not to mention any number of sci-fi films, yet I haven’t been so bored by one since Marooned. First Man had a tough job in detailing the life and work of a man who was famously laconic and understated, and while Ryan Gosling’s portrayal of Neil Armstrong is both of those things, he doesn’t add enough to the blank face and muted reactions to keep Armstrong from seeming just dull. The same goes for Claire Foy as his long-suffering wife Janet; she outshines Gosling with a few emotional fireworks, but their final scene together is a weird conclusion of emotional constipation, which also doesn’t mention their eventual divorce.

As for its portrayal of the space program, First Man does feature some riveting moments that showcase Armstrong’s levelheadedness and which haven’t been put to film before, such as a close call during one of his experimental test flights or the near disaster of Gemini 8. (I don’t recall the Apollo 1 fire being re-created before now in as much detail either.) The problem is that Chazelle chooses to focus on the claustrophobia of these moments by giving most of them a first-person, shaky-cam view that stays inside the cockpit, rarely letting us see what’s happening outside the spacecraft. It’s a clear artistic choice that gets old fast, and while I heard the moon landing itself makes it all worth it, there was nothing particularly special about that scene either. I appreciated its silent poignancy, but I was also distracted by the bizarre absence of stars. What makes it more bizarre is that I looked back at actual Apollo 11 photos, and there were no stars visible there either! Did I just never notice the black emptiness of space? Why wouldn’t there be stars? I realize that gripe is no longer the movie’s fault, but it still puzzles me on an astrophysical level.

The subject may be historic, the casting may be full of recognizable faces, and the filmmaking pedigree may be impressive, but First Man was an unfortunate misfire for me. Compared with La La Land, it’s certainly a testament to Chazelle’s range as a director, but all those pluses just couldn’t overcome a weak script that didn’t spark enough interest in its potentially prosaic subject. And considering the visual extravaganzas that took place in Avengers: Infinity War and Ready Player One, it makes no sense to me that this would win the Oscar for Best Visual Effects. I wanted to like it, and I still think a great movie could be made about Armstrong and Apollo 11, but sadly First Man is not it.

Best line:  (Armstrong) “I don’t know what space exploration will uncover, but I don’t think it’ll be exploration just for the sake of exploration. I think it’ll be more the fact that it allows us to see things. That maybe we should have seen a long time ago. But just haven’t been able to until now.”