They say that you cannot return to the days
When the world held the awe it no longer displays.
The people and scenes are no more in their prime,
And you aren’t the you that you were at the time.
The flavors and sounds may be echoing still,
But the farther you get, the more gone is the thrill.

The memory seals them away as in glass,
Preserving their pricelessness as the years pass.
And even as foolish modernity tries
Revisiting heirlooms to revitalize,
Nostalgia may warrant a smile and sigh
At the echoes that fade but are sure not to die.
_______________________

There are some movies that shouldn’t be touched by Hollywood’s incessant need to remake its old classics, not necessarily because the originals are better by default, but because there’s no way they can compete with a film that was, is, and always will be a classic. I thought for sure that Mary Poppins was one of those movies, but Disney had other ideas. What they delivered in Mary Poppins Returns is as close as the modern day can come to the old-school style that created its predecessor, but try as it might, there’s just something missing.

Julie Andrews is irreplaceable, but when I heard Emily Blunt was to play Poppins, I figured she had the best chance of anyone to fill her shoes. And in many ways, she does, right from the moment she floats in on the end of a kite flown by one of Michael Banks’s children. Michael (Ben Whishaw) is all grown up now, a widower still reeling from the loss of his wife and struggling to hold onto the family home. Despite his and Jane’s (Emily Mortimer) best efforts, Michael’s three largely responsible kids are in need of some comfort and whimsy, and thus Mary Poppins steps in, perhaps a bit more smile-prone than before but close to the way they/we all remember her.

Mary Poppins Returns is a lot like Star Wars: The Force Awakens in its faithful adherence to the original (some might say too faithful). It follows the general plot of its forerunner to a tee, the same character types, the same sequence of events. Instead of jumping into a chalk drawing, they spin into a cracked ceramic bowl for another semi-animated holiday; instead of floating with Mary’s Uncle Albert, they turn upside-down with her cousin Topsy (Meryl Streep). In place of Dick Van Dyke’s chimney sweep Bert, there’s Lin-Manuel Miranda as lamplighter Jack, doing an excellent job at being casually charming. There are differences, of course, such as the presence of a genuine villain in Colin Firth’s bank president, but sticking so close to the original formula just begs for direct comparison, and Mary Poppins Returns just doesn’t quite match the first. 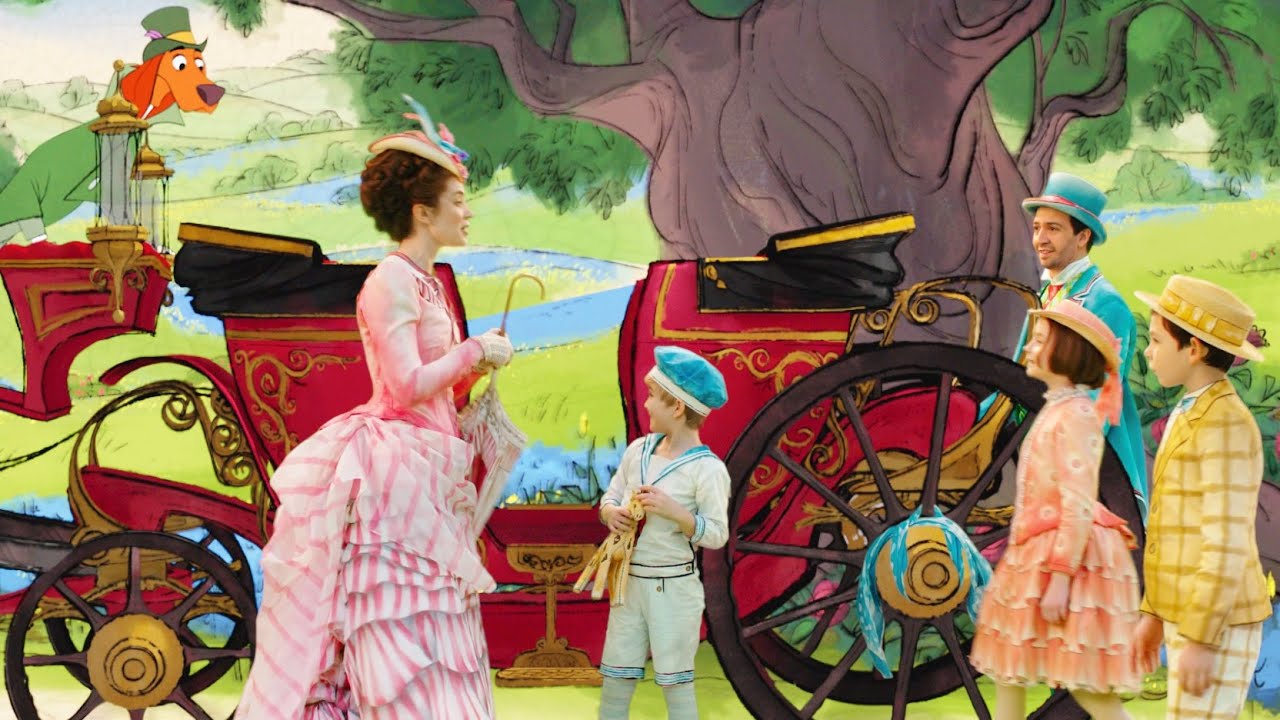 Yet it’s so close to the spirit of the original that I can’t help but wonder how much the original relies on nostalgia. Mary Poppins is an incomparable, wholesome family movie, but I am surprised at times to think that Julie Andrews won her Oscar for it rather than The Sound of Music. Its plot is loose and episodic, so I can’t criticize the sequel for being the same. I knew my VC, as a staunch fan of the first film, would have the hardest time accepting Mary Poppins Returns, and while she gave it a good try and liked the beginning, she essentially checked out when it no longer conformed to her idea of what Mary Poppins should be.

At one point in the entertaining segment with animation, Mary gets up on stage to perform with Jack and sings some slightly risqué lyrics. My VC immediately thought, “Mary Poppins would never do that,” and the facsimiled magic was broken. That’s why revisiting such classics is so potentially treacherous; while original content is subject to the creator’s whims, sequels and remakes depend on the audience’s. The same happened with The Last Jedi and the whole “not my Luke” debacle; I loved the film but couldn’t deny all of its criticisms. As with Mary Poppins Returns, it’s simply a matter of whether it bothers you or not.

It probably sounds like I didn’t like Mary Poppins Returns, but I did, just not as much as its classic forebear. The music and choreography aren’t as memorable, and by the two-thirds mark, it was bordering on boring, making me think it could have benefited from a shorter runtime than 130 minutes. Yet it has an old-school charm, evident in both the vintage streets of live-action London and the small but welcome return of some 2D Disney animation. In many ways, I’m just glad that movies like this can still be made today and perhaps capture the hearts and future nostalgia of another generation. It at least does no harm to the legacy and spirit of the original and, especially toward the end, comes closer than I ever thought a modern-made Mary Poppins sequel could come.