(Today’s NaPoWriMo prompt was for a poem that meditates on a strong emotion, like disillusionment with the world at large.) 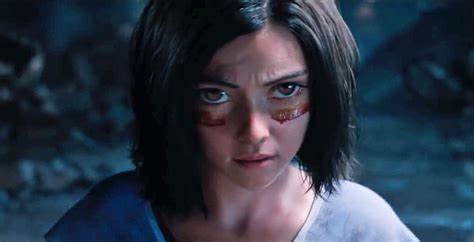 The world is not the friendly place we once had promised to ourselves
When youthful optimism held some sway within our hearts.
We like to think that’s still the case, and yet the more a person delves,
The more this human-born machine reveals its sordid parts.

It’s tragedy that truly wakes our minds to darkness come to light,
That shows how cruel the world can be, with men its messengers.
We’re ignorant of risk and stakes, and enter honestly the fight,
Too late to learn the world was not designed for amateurs.
___________________

MPAA rating: PG-13 (comes close to R with the violence)

I’ve been looking forward to Alita: Battle Angel for well over a year, ever since I heard James Cameron was planning on bringing the long-running manga Battle Angel Alita (a.k.a. Gunnm) to Hollywood. This movie fascinates me not only for its visually awesome cyberpunk future, but also because it owes its existence to one man’s passion project, bringing an extremely niche franchise to a far wider audience than it otherwise would have enjoyed. It makes me wish something similar would happen with Steins;Gate or Cowboy Bebop.

Adaptations between manga/anime and live-action have historically been more miss than hit, but Alita is finally the hit that fans have been waiting for, faithful to its origins in the best way. I, for one, have not read the manga that so enthralled James Cameron, but I have watched the 1993 OVA (Original Video Animation), which is basically like a direct-to-video anime. At only 55 minutes long, it was an imaginative if brutal sci-fi that I definitely recognized had plenty of potential for the big screen. And now that it has, I’m thrilled that such potential was not wasted.

The manga/anime/film tells the story of the cyborg Alita (Rosa Salazar), a girl whose head is discovered in a trash heap by cybernetics expert Dr. Ido (Christoph Waltz). Finding her human brain still active, he rebuilds her body and introduces the amnesiac girl to the cutthroat world of Iron City, a sprawling dystopia patrolled by cyborg bounty hunters and festering in the shadow of the floating city known as Zalem. Trying to regain her memories, Alita becomes a Hunter Warrior herself as she falls in love with young Hugo (Keean Johnson) and navigates the plotting of Ido’s rival Dr. Chiren (Jennifer Connolly), the villainous Vector (Mahershala Ali), and his killer henchmen.

As it is, Alita might bring to mind several other films, such as Elysium with its floating city of higher class exploitation or the cyberpunk aesthetic of Ghost in the Shell, but I can’t help but feel that, if Alita had come out twenty years ago, it would be blowing people’s minds left and right. Yet the manga predates most of what it seems to borrow from, though the sport of Motorball definitely seems inspired by Rollerball.

I’m glad, though, that Cameron wasn’t able to make Alita when he first wanted to back in 2003 because the visuals wouldn’t have been this good. Alita: Battle Angel is a sci-fi action treat, with visual effects that have a good shot at an Oscar next year. Alita herself is stunningly realized, with Rosa Salazar providing a strong motion capture performance, augmented by the effects team with those anime-sized eyes that aren’t as hard to get used to as you might think. There are a few hiccups in the animation early on that threaten to be distracting, but by the time Alita starts kicking criminal butt, she’s seamlessly a part of this world.

The live-action Ghost in the Shell was distracting for me because it was a mish-mash of various plot points from the anime film and series; Alita, on the other hand, might be the most faithful adaptation I’ve come across. Nearly everything in the anime is also in the movie, sometimes even shot for shot (like Chiren squishing a bug while telling Ido she’ll claw her way back to Zalem), though the movie’s greater length allows it to expand on many plot elements, such that watching the anime is like a highlight reel of the film. Considering how anime adaptations have flopped so hard over the years, the film’s faithfulness to its source material is laudable and likely credited to the efforts of Cameron himself as a fan of the manga. Interestingly, I understand that some differences from the manga were actually borrowed from the anime; one villainous character is killed in both versions but apparently survives much longer in the manga.

That’s not to say there aren’t other differences; the source of Alita’s name and body is given more emotional weight in the film, and Ido’s former relationship with Chiren is explicitly romantic where it wasn’t before. And the film throws in entire sections that I can only assume are drawn from the manga since they weren’t in the anime, like the deadly sport of Motorball and the glimpses of Alita’s forgotten past. For me, these additions only added to the epic dystopian world-building that I so admire.

One thing I was concerned about the adaptation was just how violent it would end up being, and I was relieved that it earned a PG-13 rating and the wider audience that that entails. Don’t get me wrong; Alita: Battle Angel definitely pushes the boundary for a PG-13 film with multiple heads and limbs sent flying, but the anime is certainly more violent and bloody. The movie may have its brutal moments, but I was glad it was largely bloodless, leaving out the anime’s brief nudity and leaving some cruel moments mercifully offscreen.

While Alita was a pleasure to watch on the big screen, I find myself struggling with how to rank it. I’m still not a fan of the mostly bitter ending common to both the anime and film, but I’m excited for whatever may come in the (hopefully forthcoming) sequel, which is uncharted territory for me. My ranking could easily change with time, but I’ll err on the side of caution and make it a List Runner-Up. Nevertheless, for the most part, Alita: Battle Angel was pure effects-heavy coolness and as good as I’d hoped it would be, proving that Hollywood can make good films based on manga/anime. Perhaps it simply takes someone like James Cameron to steer them in the right direction.

Best line: (Alita) “I do not stand by in the presence of evil!”