(Today’s NaPoWriMo prompt was for a poem about a season, senses, and a rhetorical question, so I tackled the thrill of a summer drive.) 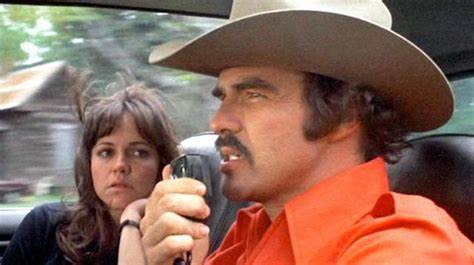 How far would you drive in the summer?
How far would the summer drive you?
Every mile, every town,
Every window rolled down
Would herald the motored newcomer,
Before he then passed out of view.

You’re old enough not to be reckless,
But young enough not to pay heed.
So let the wind howl,
Let the slower folk scowl
While you hug the road’s skin like a necklace
And dazzle them all with your speed.

No Internet vies for your vision,
No buzz in your pocket distracts.
The only machine
That you currently preen
Is the engine defined by precision,
The one that leaves all in your tracks.

MPAA rating: PG (should definitely be PG-13 by today’s standards, for language)

In the wake of Burt Reynolds’ death, it seemed only right to check out the film that really solidified his popularity and brilliantly utilized his natural charisma. Smokey and the Bandit is lightweight and undemanding, but I doubt it could be any more entertaining.

As the titular “Bandit,” Reynolds is a mustachioed force to be reckoned with, cruising along Southern highways and backways in a now iconic Pontiac Trans Am. His Bo Darville accepts the offer of two deep-pocketed Texans (Pat McCormick and Paul Williams) to ferry a truckload of illegal Coors beer from Texarkana to Atlanta in 28 hours. Helped along by his friend “Snowman” (Jerry Reed, who also sings the awesome theme song “East Bound and Down”), Bandit takes on a passenger in a runaway bride (Sally Field) and makes an instant enemy out of tenacious, belligerent Sheriff Buford T. Justice, aka “Smokey” (Jackie Gleason in rare form).

Smokey and the Bandit is undoubtedly a product of its time, released at the height of the CB radio craze, and it seems bizarre to me that Coors would be illegal east of Texas even decades after Prohibition. It apparently wasn’t sold in the East due to its lack of preservatives, but I’ve read that the illegality comes more from the amount (400 cases) being shipped illegally over state lines, rather than the brand. I remember my mom mentioning what a big deal it was when Coors was finally available on the east coast, only to discover she thought it tasted terrible.

Even so, the beer fuels the chase of the film, as Bandit uses every rubber-burning trick in his arsenal to elude the cops and keep Snowman off their radar. The film might have benefited from a better method of keeping track of the deadline, since there are moments when the tension of the time limit doesn’t seem all that important, yet it’s still a blast. Gleason, in particular, is a hoot as the quintessential exasperated lawman, made more memorable by his dimwitted son/deputy, a repeatedly mutilated car, and a colorful vocabulary.

Smokey and the Bandit is largely unrealistic, and its script is an engaging mix of the clever and lowbrow, but it vrooms along under the sheer likability of Reynolds and Field. While I feel like it owes its classic status more to age/nostalgia than to anything else, it’s a truly fun and easily watchable summer blockbuster that only the ‘70s could have produced.

Best lines: (Big Enos) “You see, son, old legends never die. They just lose weight.”
and
(Sheriff Justice) “What we’re dealing with here is a complete lack of respect for the law.”