(Today’s NaPoWriMo prompt was for a poem about animals, so I tried to be less literal and wrote of how man is the most dangerous animal of all.)

Animals, animals!
What an insult
For mankind to level at one of his own!
An absence of conscience,
Deeds unprincipled –
For these, as an animal you will be known!

But animals do not
Take life for mere fun,
Nor yet do they harbor a conscience to lose.
No, those are unique
To the broken human,
The one so-called animal known to abuse.

Science fiction has always been one of my favorite genres, so it was only a matter of time for me to catch up on Vin Diesel’s cult-classic Riddick series, which all started with Pitch Black. Oddly enough, Pitch Black is the highest rated of the trilogy on Rotten Tomatoes, yet still bears a 59% Rotten rating. Yet most films don’t garner a trilogy without doing something right, and Pitch Black does more right than wrong.

You know what I considered Pitch Black both before I saw it and while I was watching it? A more R-rated version of Aliens. While its plot is undoubtedly inspired by Aliens, I didn’t realize till afterward that Aliens has more profanity and comparable violence. I guess I’m just so used to seeing it cut when it comes on TV that such things stood out more in Pitch Black. Regardless, though, I love Aliens, and I enjoyed Pitch Black for many of the same reasons.

It doesn’t start out as a monster movie. A shipful of passengers in cryostasis are rudely awakened by disaster (not unlike Alien: Covenant) and stranded on a planet of perpetual daylight. Among them is the now-famous Richard B. Riddick (Diesel), a dangerous and shiny-eyed prisoner freed in mid-transport. As the survivors seek a way off the planet, they learn that they’ve arrived just in time for a long eclipse and that deadly swarms of darkness-loving creatures live underground and will soon be free to hunt above it. Good thing Riddick can see in the dark, right? 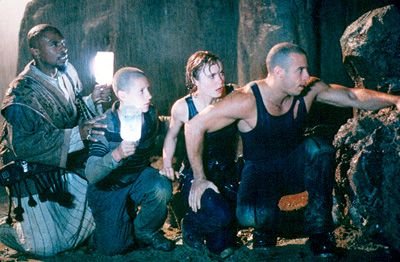 Like Aliens, Pitch Black thrives on the thrill of man vs. alien, with the aliens being either slithery, hammer-headed beasts or smaller pterodactyl-like swarms. Aside from Diesel’s hard-boiled convict, the human characters aren’t as memorable as some in this genre, but they fill their roles well, especially in how they are forced to balance survival with their general distrust of Riddick and the bounty hunter (Cole Hauser) gunning for him. Radha Mitchell even has a stirring character arc concerning the weighing of lives, and Keith David plays a travelling imam, highlighting how unusually diverse it is to see a Muslim in science fiction.

The creatures and visual effects work surprisingly well, considering they’re not as polished as most Hollywood features; in fact, the way writer-director David Twohy shot it sometimes gives scenes an odd TV movie quality. This belies its modest budget yet somehow works to the film’s advantage, keeping some of the more violent parts blurry and contributing to its cult classic status.

In many respects, Pitch Black feels like someone wanted to give their own spin to the Aliens formula, but it has enough plot twists and unique action sequences to set it apart as more than a lazy copycat. There are still moments where characters act stupidly and don’t seem to realize that darkness = bad, but it’s also memorably tense, particularly a death scene involving a lighter that ought to be more famous simply for its chilling visual impact. Pitch Black may not rival Aliens for sci-fi horror and doesn’t exactly end as I would have liked, but it’s quite an entertaining member of the genre with perhaps the best antihero I’ve come across, one worthy of a cult classic status.

Best line: (Johns, the bounty hunter) “Battlefield doctors decide who lives and dies. It’s called ‘triage’.”   (Riddick) “They kept calling it ‘murder’ when I did it.”