(Today’s NaPoWriMo prompt was to present “a scene from an unusual point of view.” Thus, I took the fairy tale terror of a dragon carrying off a young maiden and provided the dragon’s angle.)

I am the dragon, the lizard of lore,
So hated and feared by mankind.
From the sky do I hunt,
And I take what I want
From the men who wince under my roar.
From the day that I hatched,
I’ve had power unmatched,
A monster by nature designed.

Now in my talons, I carry a girl,
Flown higher than humans would dare.
I made my attack
With the thought of a snack
And escaped with my prize in a whirl.
Her kin now must mourn,
For their cold-blooded thorn
Has taken her back to his lair.

MPAA rating: Not Rated (could be PG, maybe more PG-13)

It’s rare that a film feels like a fairy tale, not just a Hollywood version of one but an original fairy tale with its roots firmly planted in romance and the fantasy culture of a nation. In the case of I Am Dragon (or He’s a Dragon), that nation is Russia. Based on the Russian novel The Ritual, the result is a film that tows the line between epic and sappy but is beautifully mounted and appealingly dignified compared with what I imagine a Hollywood version might look like.

A prologue explains how a dragon once terrorized a medieval village, carrying away the innocent maidens offered to him as sacrifices until the day a hero slew the beast. Fast forward then to the arranged wedding of free-spirited Princess Miroslava (Maria Poezzhaeva), or Mira, who is none too thrilled with her appointed husband. In a case of unwise history-rebranding, someone thought it would be a good idea to use the old dragon-summoning song during the ceremony, and everyone is shocked when the dragon reappears to carry Mira away. Mira soon awakens on the dragon’s remote island lair, where a handsome young man she names Arman (Matvey Lykov) proves to be a charming but conflicted host.

I won’t say any “spoilers” outright, but as you can probably surmise from my description, this is like a Russian version of Beauty and the Beast, with some very clear echoes to the Disney version of events. However, with a dragon taking the place of the Beast and an almost Game of Thrones-style aesthetic, it’s a successful variation of the familiar tale, which is also leagues better than Disney’s cringe-worthy live-action version. 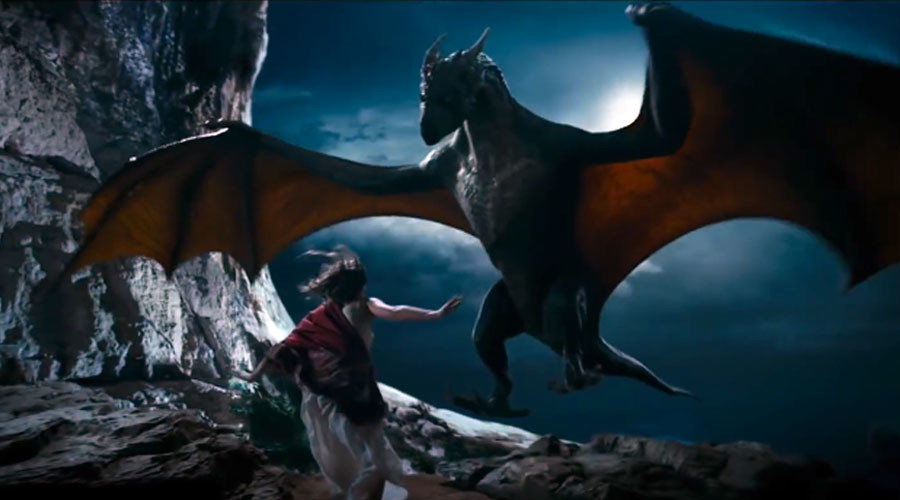 As for the romance, there’s certainly chemistry between Mira and Arman, the former headstrong and adventurous, the latter self-loathing and in need of love. The island setting, though, along with Arman’s perpetually shirtless self does make the romantic scenes feel like something out of a Harlequin novel, albeit one with surprisingly grand production values, atmospheric music, and impressive CGI. (I even included the above image from this film in the top right picture of my fantasy banner.)

It really depends on your capacity for potentially mawkish love stories, but for me, I Am Dragon had enough high fantasy to outweigh the few corny moments, and the romance was still engaging and carried weight while thankfully keeping things PG for the most part. I’m glad to have stumbled upon this admirable fantasy, which makes me think that little-known Russian cinema can hold its own against Hollywood’s more publicized output.