(Today’s NaPoWriMo prompt was to incorporate some kind of business jargon, but my limited time also limited my thought process on this one, so I skipped the prompt. Just a limerick today, with a bit of dark wordplay.) 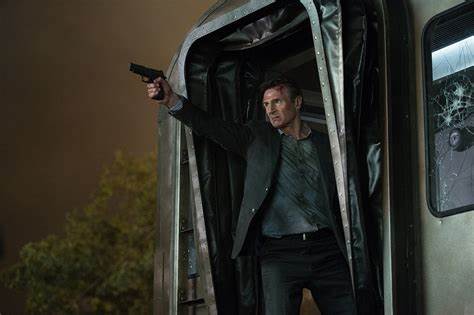 There once was a frazzled commuter
Who spent his whole day on computer.
They say that he snapped
After feeling too trapped
And became an acclaimed troubleshooter.
__________________

Liam Neeson just loves these late-in-life thrillers where a 65-year-old can still kick butt. I haven’t kept up with them all so I can’t rightly tell how The Commuter compares, but I for one enjoyed it a lot.

Neeson plays Michael MacCauley, an insurance agent and ex-cop, who on the day he gets laid off meets a mysterious woman (Vera Farmiga) who offers him $100,000 for him to find someone called “Prynne” on the train who doesn’t belong. It’s a vague task, and as Michael gets pulled in further, he soon finds it to be a life-and-death struggle that’s not about to let him go easily.

Despite Neeson’s age, he fits the role like a glove, and the early scenes detailing his daily routine and commute establish him as a likable everyman. Once the action starts, he keeps up admirably, especially during a stand-out one-take fight scene with excellent camera work. The twists and turns offer a few surprises as well, even after what would normally be the final set piece for a film set on a train.

Also starring Elizabeth McGovern, Sam Neill, and Patrick Wilson (shame he had no scenes with fellow Conjuring star Farmiga), The Commuter probably isn’t the kind of movie that is likely to be remembered years from now.  But it’s a fast-paced mystery thriller (albeit with some convolutions and unanswered questions) that proves how watchable Neeson can be.