(For today’s NaPoWriMo prompt, we were to write a poem that ends with a question, so I tried to channel the underlying panic in this thriller. On a side note, I’m not really this paranoid in real life, just seen too much Criminal Minds lately. 🙂 )

Don’t you know that dangers lurk where many do not dare to dream,
And folk who look so ordinary prove much darker than they seem?
Don’t you know and don’t you care
That predators are lurking there,
Where no one thinks to be aware
Until they do not have a prayer?

I’ve seen the CSI shows, and I know the nightly news.
There are murders out on Main Street, there are allies who abuse,
There are hedons on the highway, there are fiends among our friends,
And I fear the day when bubbles pop and ignorant bliss ends.
This one may well be the day
When someone snaps and goes astray,
When thin decorum’s stripped away
And black and white are turned to gray.

Is your neighbor one of those with skeletons beneath their floors?
I know they’re out there; you do too, yet never thought to think of yours.
It’s paranoia, some will say,
While hearts of darkness have their way.
Is not the deadly viper’s nest
Where no one would have ever guessed?
_________________________

I watched Duel strictly out of curiosity to see Steven Spielberg’s very first film as director, even if it was a TV movie at the time. Coming four years before Jaws, Duel served as a practice round for the thrills Spielberg had yet to deliver. It’s apparently considered one of the best TV movies ever, but I think it has weaknesses and mainly serves as evidence of how Spielberg improved as a director. 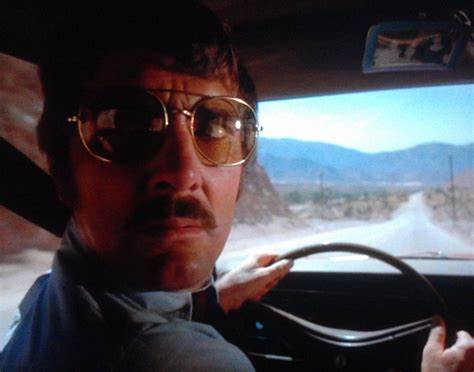 Dennis Weaver plays David Mann, an ordinary salesman on his way to a business meeting, who drives into the desert and passes a large tractor-trailer. Before long, though, he realizes that this truck’s driver has it in for him, repeatedly antagonizing and threatening his life. It’s a simple premise (reused in other films like Joy Ride) that Spielberg makes the most of, finding new ways to make the truck into an enemy while always keeping the driver anonymous, a faceless and relentless enemy not unlike the shark in Jaws.

However, even 90 minutes seems to be too long for the simplicity of this plot. It certainly has its moments, especially when the truck becomes more actively villainous toward poor Mr. Mann, but I found myself getting bored over time, which is never a good thing for a thriller. There was just too much of the truck looming behind and passing and being passed, while a sweaty Weaver frantically looks over his shoulder at it, sapping the tension through sheer repetition. Plus, the conclusion is left too open-ended, offering no resolution for anything outside of the truck plot.

Even so, for a TV movie, Duel is far better than a lesser director might have made it. Right from the first shot, Spielberg does the unexpected, providing a first-person driving view from the car’s perspective as the credits start. The film overall proves his unique talent but also how much further it grew with time and practice. This ain’t Jurassic Park, but we wouldn’t have Jurassic Park or Jaws or many other such films without it.