What makes a hero, I ask you, my friend?
Some inhuman power defending good ends?
Some courage or virtue beyond normal means
Or blasting the bad guys to small smithereens?
Perhaps perseverance, refusing to yield,
Or wielding a weapon, a sword or a shield?
No, heroes are simple yet more than all these,
And those they inspire can spot them with ease.
_____________________

Well, I’d say the Marvel Cinematic Universe has a new MVP. No, not Captain Marvel, although she’s pretty cool too. I’m talking about a scene-stealing cat named Goose (which is a Top Gun reference since Carol Danvers was an Air Force pilot). There are still endless possibilities in the MCU, many of which are opened by this very movie, but I’d be happy if every movie from now on had a cameo from Goose. 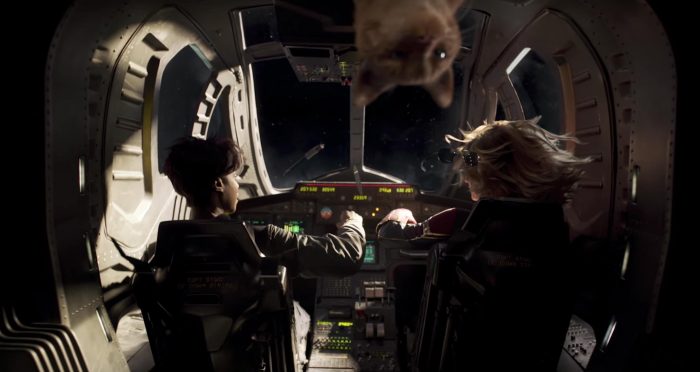 As for the rest of the movie, widely touted as Marvel’s first film with a main female protagonist, Captain Marvel is a success beyond the cultural box it ticks. I had some reservations about Brie Larson playing Carol Danvers, just because of how serious she is in most of the trailers, but she is a welcome addition to the MCU, finding a healthy balance between self-assured power and typical Marvel humor. It does help that she usually has someone to play off of, sometimes Jude Law as her Kree trainer Yon-Rogg but mostly that someone being Samuel L. Jackson’s Nick Fury, who has two eyes and is digitally de-aged (incredibly well, by the way) since this is set back in 1995. Having already starred together in Kong: Skull Island and Unicorn Store, the two have great buddy-movie rapport as they take on the war between the shape-shifting Skrulls and the Kree Empire.

A word to the uninitiated: Captain Marvel doesn’t try to give many concessions to the casual Marvel viewer. There are moments in the first quarter or so that are bound to leave people confused, but it picks up when events (and Captain Marvel herself) get more down to earth. The alien Skrulls, who can impersonate anyone, make for an intriguing foe, especially with Ben Mendelsohn as their leader, and the makeup work for them is much more effective than if they had been created solely with CGI. And as usual with Marvel, the effects and action are top-notch, especially when Danvers reaches her maximum power (the “Whoo!”s she makes while destroying alien ships really add to the fun).

My VC wasn’t all that excited for Captain Marvel. Not being much of a feminist, she didn’t like the gender switch, since she associated the name Captain Marvel with the male hero Mar-Vell from the comics (never mind that the name originally belonged to the DC character now known as Shazam). While it didn’t remove all her reservations, the film managed to win her over to accept this version of the character. I think this was not only due to the fun ‘90s setting but also its message of perseverance that is universally human, not being limited to male or female. Whether Carol Danvers is known as Ms. Marvel or Captain Marvel (neither name is actually used in the movie), she’s a welcome heroine for the MCU for reasons beyond the fact that she’s a she.

Captain Marvel is a well-made origin story that sits squarely in the middle of the MCU rankings and, like last year’s Black Panther, doesn’t seem to have much bearing on the next Avengers movie following in its wake, aside from providing background for a major character. Nevertheless, it has lots of well-planned ties into the larger MCU (loved Stan Lee’s tribute, and I’ll never look at Fury and his scar the same way again!) and still whets the appetite of us Marvel nerds; the first thing I said when the credits rolled was, “At least we only have another month to wait,” to which my VC replied, “Thank God!” Now, in addition to all the hopes and fears I had for Endgame, I can add the hope that Goose will make an appearance. Fingers crossed!