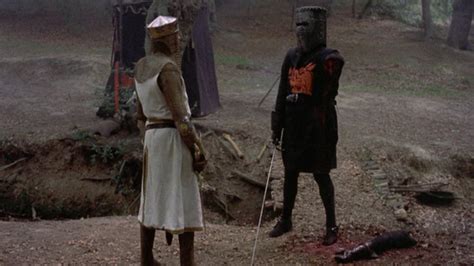 King Arthur and his band of knights
Were questing for the Holy Grail.
(We only know the big highlights
Or else ‘twould be a boring tale.)

Their names in legend often show,
Like Galahad and Lancelot,
Though some had names we’ll never know
Because they liked to dance a lot.

Well, I’ve gotten 2019 off to a slow start as far as this blog. I’m already behind on my Blindspots, but it’s time to get started.

So why did I select Monty Python and the Holy Grail as a Blindspot pick this year? I thought it was about time that I see the source of lines like “It’s only a flesh wound,” which has creeped into the everyday speech of even those of us who haven’t seen this classic comedy. Honestly, there are so many well-known scenes from this irreverent British farce that I just wanted to see whatever connected them. (Note that the Killer Rabbit of Caerbannog made it onto my Top Twelve Rabbits in Movies even before I’d watched the full movie.) Plus, I came to realize, although I’ve seen the likes of John Cleese and Michael Palin, I’ve never seen the whole Monty Python troupe together as they are in their first film, each of them playing multiple varied roles.

While I was a little disappointed that there wasn’t much connective tissue between the individual memorable scenes apart from King Arthur’s quest for the Grail, there were plenty of chuckles to go around. Sometimes it was random meta moments like escaping from an animated creature because the animator keeled over or even more random gags that became funnier with repetition. Some of the jokes do go on too long, losing their humor in the process, but even this weakness often becomes another chance for the film to poke fun at itself. (“Get on with it!”) I also got to recognize moments that have been borrowed in other media, like the way the Knights’ Trojan Rabbit is heard being constructed in the woods. 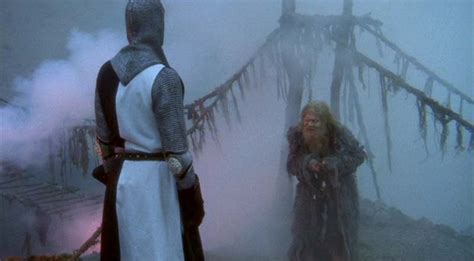 The hilarity wasn’t constant, but Monty Python and the Holy Grail certainly made me laugh with its rye British absurdity, even right from the start with the opening credits about moose and llamas. (It reminded me of the equally hilarious end credits of a weird little film called Roller Town. Seriously, why don’t more movies use their credits as part of the jokes?) The ending was a bit of a letdown, abrupt in a way that reminded me of An American Werewolf in London, but I can see why Holy Grail has become such a lauded and influential comedy, even if it’s not among my personal favorites. I did like those French insults, though, and will be looking for chances to use them myself. 😉

Best line:  (French soldier/heckler) “I don’t want to talk to you no more, you empty-headed animal food trough wiper! I fart in your general direction! Your mother was a hamster, and your father smelt of elderberries!”