In the deep glades of the forest
Where we humans rarely dare
Grows a flower raised on rumor
No one really thinks is there.

In this flower dwells a power,
Magic purely legend-born,
Waiting for some wanderer
To chance upon this plant forlorn.

I know I was not the only person to be bitterly disappointed when Studio Ghibli announced its hiatus, which has since been reversed with Hayao Miyazaki again coming out of retirement for one more film. Even if that last film really is their last, though, there is hope yet that its imaginative spirit will live on in Studio Ponoc, a new animation studio founded by former members of Ghibli. Carrying on the legacy, Hiromasa Yonebayashi, previously director of Ghibli’s The Secret World of Arrietty and When Marnie Was There, brings much of the old Miyazaki-style magic to Studio Ponoc’s first feature, Mary and the Witch’s Flower.

Based off a 1971 children’s book called The Little Broomstick by Mary Stewart, Mary and the Witch’s Flower follows a young British girl who discovers a mysterious flower in the woods, which grants her temporary magical powers and allows her to visit the prestigious Endor College for witches, where the magical faculty are up to no good. Beyond the very similar art style, the film draws enormous inspiration from the catalog of Studio Ghibli, as any fan of Kiki’s Delivery Service, Castle in the Sky, Spirited Away, or Howl’s Moving Castle will easily tell. It’s not just the plucky young heroine either; individual scenes are clearly echoed as well, from broomstick-riding with a black cat to climbing up the roots of a giant tree. Yet for everything it borrows, Mary and the Witch’s Flower also feels of a piece with those classics, like a respectful grandchild.

Speaking of which, there’s something refreshing about the difference between this kind of Ghibli fare and western animation. Whereas most western cartoons paint adults as either jerks or fools, the Japanese esteem for elders shines through in the respect Mary shows her grandmother. This reflects the overall gentleness of the story, again another Ghibli trait. Despite an adventurous plot involving high-flying brooms and animal experimentation, Mary lacks depth and sometimes comes off a tad too genteel, in a way with which not all adults will connect. 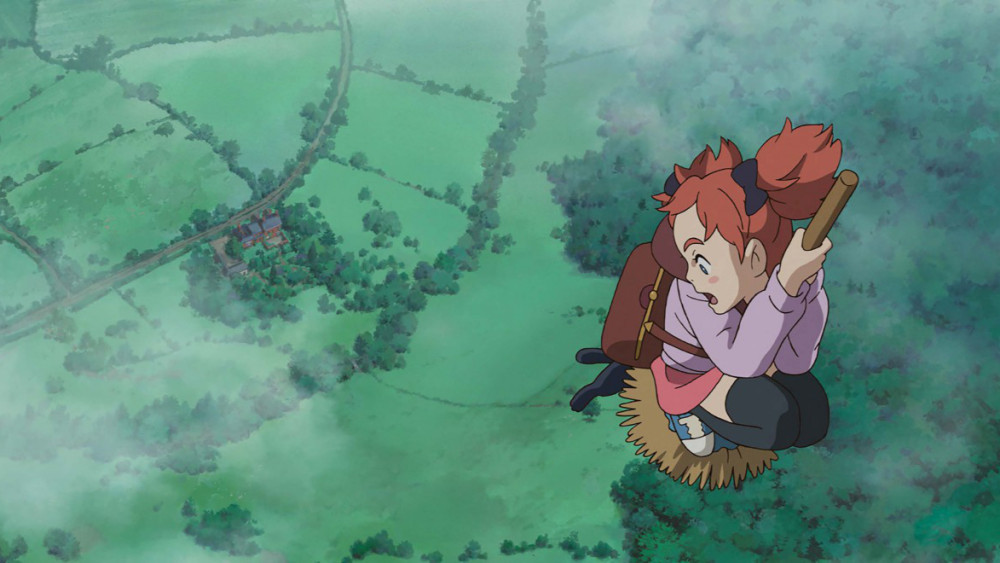 Gorgeously animated, Mary and the Witch’s Flower is too derivative to compare with Ghibli at its best, but it’s a lovely film nonetheless, with enough affectionate detail and colorful whimsy to satisfy fans of the films it emulates. No doubt kids who grow up watching this movie will feel the same way about it years from now that many feel about Kiki or Arrietty. It’s certainly a sign of promise for Studio Ponoc’s future.