When tragedies have run their course,
Demanding pity and remorse,
It’s easy wondering if they
Could end up any other way,
The fruit of foolishness and force.

Yet tragedies are not complete
Without some happiness’ retreat.
Contentment grief could not erase,
However brief, once offered grace
To take the bitter with the sweet.

Unfortunately, I haven’t been able to write or review much recently, not only because of Thanksgiving but because of the increasing demands of school. That will probably only get worse over the next two months (sorry!), but I wanted to make time for the latest version of A Star Is Born. Nearly two years ago, I did a Version Variations post comparing the three former incarnations of A Star Is Born – the 1937 original, the 1954 Judy Garland musical, and the 1976 Barbra Streisand musical – and I couldn’t help but notice the huge surge in views that post got when Bradley Cooper’s latest film hit theaters. Back then, I made a fleeting reference to another version in the works, and at last here it is, a heavy-hitting Oscar contender that deserves the same appraisal as its forerunners.

Bradley Cooper and Lady Gaga have been rightly lauded for this modern retelling of a decades-old story. It’s likely familiar to many: A big star discovers a budding talent, falls in love, and helps her own ascent to the top while crashing pitifully into drunken disgrace. In addition to producing and directing, Cooper plays Jackson Maine, the big name in country rock who is taken with an unknown singer named Ally (Lady Gaga) and whisks her into the limelight.

Cooper is almost unrecognizable next to previous roles like Silver Linings Playbook, bearded, singing admirably, and boasting a much deeper voice than usual, one that still doesn’t quite match that of Sam Elliott as his older brother/manager. By the time Ally reaches stardom, it’s easy to see why Cooper insisted on Lady Gaga’s casting, but she delivers more than just her distinctive voice, nailing the dramatic moments just as well as more established actresses. Stripped of her famously absurd costumes and style, it’s easier to see why she’s such a star, and it’s an interesting reversal that Ally balks at the prospect of being forced into changing her hair and adding background dancers, lest she lose herself in celebrity.

One of my coworkers wasn’t a fan of the characterization of the two leads, but I think most view the acting as close to beyond reproach, which is why Cooper and Gaga are both Oscar favorites at the moment, not unlike the main stars of the 1937 and 1954 versions. Likewise, the soundtrack is outstanding, with a blend of rockabilly and pop, headbangers and heartfelt elegies, that made me wonder which one might nab Best Original Song, since I could see most of them being worthy. (I will say that I think the 1976 film still has a more memorable soundtrack, but that might be due to my personal preferences.)

How then does this 2018 version compare with what came before? The story at its heart and conclusion is still the same, but this incarnation might have the least in common with its predecessors. The other versions (especially the 1954 one) had some scenes that were directly plucked from the one before, while the one constant that carries over into the latest version is the awards embarrassment, where Maine’s flaws are made painfully public at the Grammys. I suppose its rock ‘n’ roll context and final scene are closest in spirit to the 1976 Streisand version, but Cooper did a fine job at making this story his own.

That being said, it’s not above criticism. I personally think that the “meet-cute” between Jackson and Ally, which happens in a drag bar before they head out to a grocery store parking lot, is the weakest of the four. There’s clearly chemistry, but when Ally starts singing an impromptu song supposedly on the fly, I didn’t really buy it. 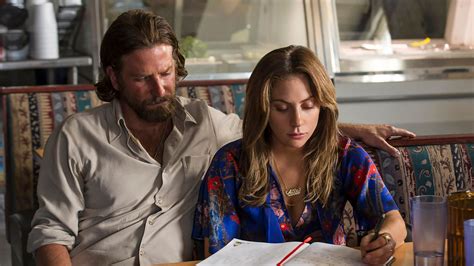 Luckily, the plot improves as it goes, putting some of the strongest scenes of any version in the second half. Jackson himself amid his addiction is especially portrayed well, particularly a heart-wrenching scene where he genuinely apologizes to Ally for embarrassing her. The 1976 version left me uncertain whether Kris Kristofferson’s character really loved Streisand’s, especially since it’s still the only version where he cheats on her; Cooper fixes that problem, painting Maine more clearly as a tragic failure of good intentions corrupted by substance abuse. The other versions were certainly sad, but Cooper’s truly embraces the story’s potential as a tearjerker.

As to be expected from an R-rated Oscar contender, the biggest problem I had with A Star Is Born is the nearly constant profanity. I know the F-word is getting more pervasive in today’s culture by the day, but when the script includes over a hundred of them, it just feels like a lazy placeholder word, ultimately without meaning. To be honest, it’s more annoying than offensive, especially when it’s hard to imagine how it could ever be cut enough to be shown on normal TV.

After much deliberation, I think I would rank this A Star Is Born second among the four, and not just because of the language complaint. The 1937 version remains the best in my opinion, thanks to its insightful script. (Plus, I love that Grandma Lettie!) Cooper’s version proves that there is still life in this story, especially when delivered with nuance and brilliant performances. It also disproves the law of diminishing returns with this tale being remade every few decades, making me wonder what the next remake thirty years from now might look like.

Best line: (Bobby,  Jackson’s half-brother) “Jack talked about how music is essentially twelve notes between any octave. Twelve notes, and the octave repeats. It’s the same story told over and over, forever. All any artist can offer the world is how they see those twelve notes. That’s it. He loved how you see them.”