Doing the impossible
(Repeatedly, if possible)
Is so much easier to pull
When backs are braced and funds are full,
For then a hero dutiful
Can fight for right as usual
And put up with a villain’s bull.

It’s harder when support is gone,
Blindsided, chased, and set upon,
A dangerous phenomenon,
For then the evildoers spawn
While tempting good to stay withdrawn.
It’s then that heroes’ brains and brawn
Are specially depended on.
_______________________

I’m so glad I finally decided to catch up on this series. The Mission: Impossible films may have gotten off to a rocky start, but J.J. Abrams’ third installment breathed new life into the franchise, which Brad Bird’s Ghost Protocol builds on even further. Every review I’ve seen has proclaimed Ghost Protocol the best installment of the series, but I think it’s more of a tie with its predecessor, though for different reasons (and of course I withhold judgment until I see the next two as well). 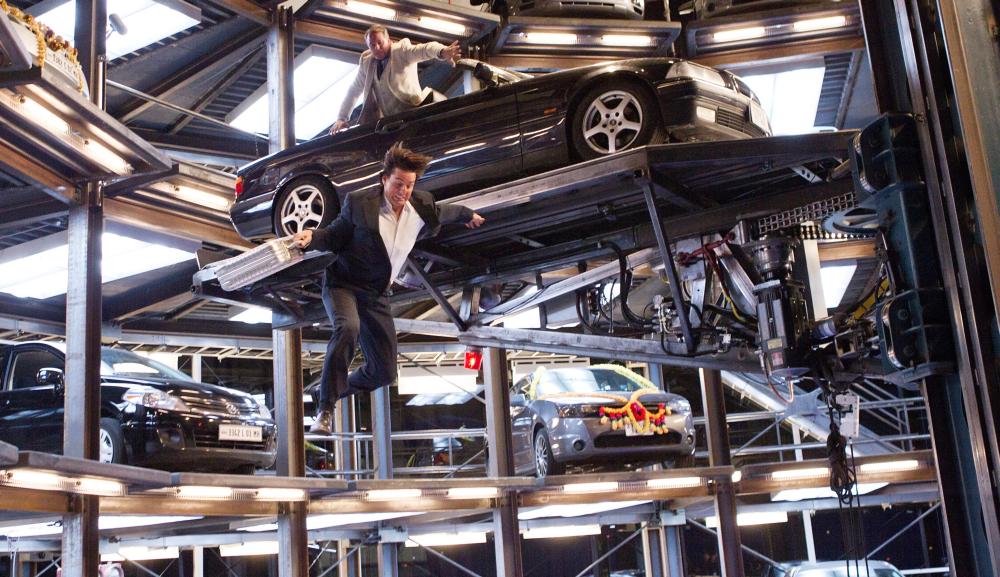 Ghost Protocol may have seemed like an odd choice for Brad Bird’s first foray into live-action, but he did nail the super-spy vibe in The Incredibles and does the same here. Delivering a similar brilliant eye for action, he puts Ethan Hunt and the Impossible Mission Force through the ringer as they endeavor to stop a Russian madman (Michael Nyqvist) from initiating a nuclear war. From infiltrations gone wrong to the extended foot chases from which Tom Cruise must get most of his exercise, the fast-paced thrills are as good as they’ve ever been, with the crown jewel being that famous high-hanging sequence with Cruise actually clinging to the outside of Dubai’s Burj Khalifa skyscraper. The whole caper surrounding that scene is the film’s “high” point (see what I did there?), but other sequences also impress, like the spies employing some fascinating new toys or the high-stakes struggle for a briefcase in one of the coolest parking garages I’ve ever seen.

My VC thought Ghost Protocol had more lulls than its immediate predecessor, and perhaps that’s true, especially with some early undercover scenes and elements that require patience to be explained, but that’s minor quibble. What Ghost Protocol has over any of its brethren is the team it assembled. Ving Rhames may be sadly missing for most of the runtime, but never has Ethan had such strong supporting players.  As a new field agent promoted from his tech job in M:i:III, Simon Pegg is more than welcome in a larger comic relief role, while Paula Patton and Jeremy Renner deliver actual motivation and personality as circumstances fling them onto Ethan’s team, offering more than just the competence of the interchangeable teammates in the past (Maggie Q, John Polson, etc.; you might be asking “Who were they again?”). It was nice seeing Josh Holloway as well (Lost alert!), even if it was a disappointingly brief appearance.

So, while I’m not raving as much as some critics, I still found Ghost Protocol to be a darn entertaining entry in the series. (And it came out in 2011? How am I just now getting to this?) The villain wasn’t as memorable as Philip Seymour Hoffman, and it didn’t quite nail the satisfying conclusion of the third film, its ever-increasing stakes being not as personal as Ethan’s struggle for his wife, but Ghost Protocol matched or exceeded it in just about every other respect. The plot had plenty of the twists I’ve come to expect from these films, and the way gadgets repeatedly malfunctioned or were unavailable kept the IMF team guessing and the suspense high. It’s not often that the fourth film in a series can still leave viewers eager for the next installment, but now I’m looking forward to Rogue Nation even more.

Best line: (Benji Dunn, complaining about their code names) “Why am I Pluto? It’s not even a planet anymore!”   (William Brandt) “Well, Uranus is still available.”