I did nothing wrong, and yet
Here I bear another’s debt.
I flee because they feel they must,
And I must follow, share their sweat,
And leave my future in their dust.

Since my schoolwork and home life haven’t given me an abundance of time for watching movies of my own choice (or reviewing them), that limitation has also applied to my dear Viewing Companion (VC), who hasn’t gotten to choose a movie for well over a month now. In trying to fix that, she introduced me to Running on Empty, the kind of former Oscar contender that you only discover either by accident or from some obscure recommendation. It’s a surprisingly effective drama in all respects, especially highlighting the squandered potential of young star River Phoenix, who received a Best Supporting Actor nomination from the Academy five years before his death.

Phoenix plays a teenage boy named Danny who can never be known as Danny. With his younger brother, he lives a life on the run, following his parents Arthur and Annie Pope (Judd Hirsch, Christine Lahti), a pair of former revolutionaries fleeing the FBI for an anti-war bombing back in 1971 (based on real-life radicals Bill Ayres and Bernardine Dohrn). He’s earnest and well-meaning, the kind of kid who may come off as a punk based on how little he says but becomes more endearing the longer you spend with him. Taking on his latest persona of “Michael,” he clearly loves his parents but is torn between wanting to protect and help them and desiring a life of his own, including a promising musical career and young love (with an acerbic Martha Plimpton of The Goonies). Likewise, his parents are conflicted as well, his father insistent on staying ahead of the law and his mother wondering when and how to let her son move on from their mistakes. 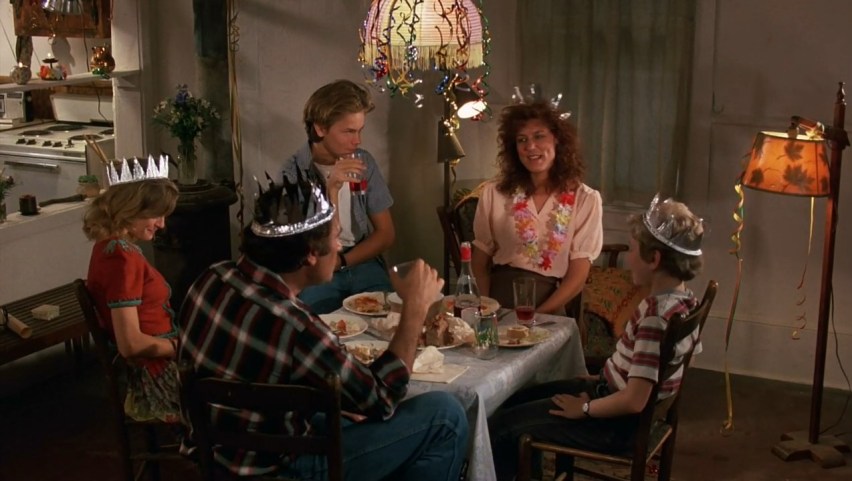 Directed by Sidney Lumet, Running on Empty has no shortage of strong acting, and though Phoenix got most of the praise at the time, Lahti’s Golden Globe-nominated role plays the heartstrings even more. The film doesn’t offer any easy answers. Danny wants to be free of the burden of his parents’ crimes, but doing so would mean either exposing them or never seeing them again after their next move. His mother is willing to turn herself in for his sake, but that would mean leaving her other young son parentless if she and Arthur are jailed. Everyone in this sweet and tight-knit family wishes for normalcy, but there’s no simple way to reach it. Add in the danger of Annie and Arthur being lumped in with other Communists who have not mellowed their violence as the Popes have, and it’s clear that no resolution will satisfy everyone.

The performances are what really distinguish Running on Empty as an engaging and realistic drama, and for some reason, its empathy and sincerity made me think of Dominick and Eugene, another Oscar-worthy film from 1988 that is oft-overlooked. However, while my VC loves it and is no doubt irked by my reservations, Running on Empty doesn’t quite make my list. Perhaps it’s simply my underlying annoyance at Arthur and Annie’s actions, claiming that they’ve accepted the consequences of their actions when they really haven’t. True, they’ve suffered by constantly running, but accepting jail time would have freed their children from that kind of life as well. Then again, Danny would have grown up without his parents, but maybe the Popes should have thought of that before carrying out bombings while he was two years old!

See what I mean? The moral questions at play here are hard to answer. And while I can be irritated by the Popes’ mistakes, those mistakes were made, and the ongoing fallout from them makes for a unique ethical quandary that remains surprisingly relatable and somehow manages a satisfying conclusion. Running on Empty may be a footnote in someone’s forgotten ‘80s collection, but it’s a hidden gem worth revisiting, as much for the reminder of River Phoenix’s talent as for the poignant questions of conscience.

Best line: (Lorna, Danny/Michael’s girlfriend) “Why do you have to carry the burden of someone else’s life?”