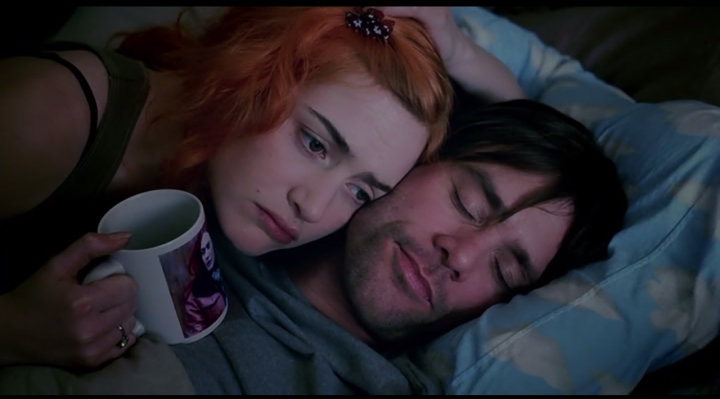 Memories are funny things,
Immortal in some form at least,
For though they twist,
They still exist
And lie in wait to be released.

Despite my falling behind on it, this Blindspot series has been a good opportunity for some firsts. Last time, I reviewed my first Marilyn Monroe film with Some Like It Hot, and now it’s my first exposure to Charlie Kaufman’s existential surrealism. Eternal Sunshine of the Spotless Mind is sort of like Donnie Darko was for last year’s Blindspots, a film so audacious in its subtlety that I couldn’t help but enjoy its unusual narrative, whether I fully comprehended it or not.

On its surface, Eternal Sunshine is a tale of love gone wrong. Introverted Joel Barish (Jim Carrey) has his life jump-started by the effervescent and capricious Clementine (Kate Winslet), not once but twice. We see them meet on a train from Montauk, only to learn that they’ve already been in a relationship, which ended when Clementine had her memories of Joel erased by the enigmatic Lacuna corporation. In retaliation, Joel commissions the same procedure for himself, and as the irresponsible technicians (Elijah Wood, Mark Ruffalo) slack off while doing their sci-fi work over the course of a single night, Joel revisits his memories and finds more worth saving than he remembered.

In many ways, Eternal Sunshine is structured as a puzzle that gradually allows itself to be solved, and I love those kinds of movies. Hints are dropped early, with many left till the end to be fully explained, and since Joel’s memories are peeled back from the most recent to the oldest, a lot of the plot is told literally in reverse, which is still easier to follow than anything in Memento. It’s watching these unraveled story threads come together that makes the film even more compelling, beyond the often relatable romance elements. (I’ll admit I saw some of myself in Joel’s self-conscious outlook.) Since so much of the story takes place inside Joel’s head, it takes numerous surreal turns along the way as it visualizes abstract concepts. Trying to prevent the erasure, Joel tries revisiting previously redacted memories, where faces and lighting are distorted, and later mixes his mental version of Clementine with unrelated childhood memories. It can get weird, or “warped” as Clementine puts it, but even its odder elements remain understandable in the abstract realm of Joel’s mind. Couple that with juggling two Clementines (one in Joel’s head as a representation of his memories of her, the other the real one struggling with her own deleted memories) and a couple ethics-challenging subplots surrounding the Lacuna staff, and Eternal Sunshine clearly boasts an intellectual complexity unique to most Hollywood fare. No wonder Kaufman won Best Original Screenplay at the Oscars that year, and I wish I’d known of the name’s poetic origin when I compiled my Top Twelve Poems in Movies list.

The actors also rise to the challenge, with Jim Carrey standing out even more than Kate Winslet’s manic girlfriend. Even in past dramatic roles like The Truman Show, there were traces of his trademark goofiness, but here he deftly subdues himself to fit the often somber tone of the script. There’s an elegiac urgency to scenes where memories are being erased, people snuffed out of existence and buildings torn apart on a metaphorical, metaphysical level. The effects used are simple but impressive in setting the scene for a series of inescapable dreams.

So often people say they wish they could forget something, but the sci-fi premise of Eternal Sunshine of the Spotless Mind challenges them to rethink what might be lost along the way if such a wish were granted. In some ways, the core relationship of Eternal Sunshine isn’t much different from (500) Days of Summer, which also shows the gradual souring of a once-so-sweet romance, albeit in a somewhat more linear fashion. (It’s funny when a film like (500) Days of Summer can be considered “linear” by comparison.) Eternal Sunshine asks whether the memory of such a soul-crushing break-up is worth retaining, especially if we as human beings might end up repeating the same mistakes consciously or not. As Captain Kirk said in one of the few good parts of Star Trek V, “You know that pain and guilt can’t be taken away with a wave of a magic wand. They’re the things we carry with us, the things that make us who we are. If we lose them, we lose ourselves. I don’t want my pain taken away! I need my pain!” Perhaps not everyone would agree that they need it, but that doesn’t mean they can’t be better for it.

Best line:  (Mary, played by Kirsten Dunst) “’Blessed are the forgetful, for they get the better even of their blunders.’  Nietzsche. Beyond Good and Evil. Found it in my Bartlett’s.”