While “work all day and dance all night”
May be a habit hard to break,
It pays the bills to underwrite
The hopes believed by us alone,
The quarter-baked ambition-prone,
Who dare to dream for dreaming’s sake,
For people’s dreams are all their own.
___________________

MPAA rating: R (for language, sensuality, and nudity in a strip club scene)

Flashdance is actually a perfect example of a VC Pick, a movie that my VC enjoys far more than I and one that I only ended up seeing after quite a bit of persistence on her part. This slice of ‘80s danciness isn’t all that different from Travolta’s Staying Alive from the same year: underdog dreamer uses their athletic dance talent to hit it big and achieve their professional dream. Instead of a man overcoming a lustful partner, though, Jennifer Beals’ Alex is a welder by day and bar dancer by night who has to overcome her own self-confidence and dare to become a ballet dancer. 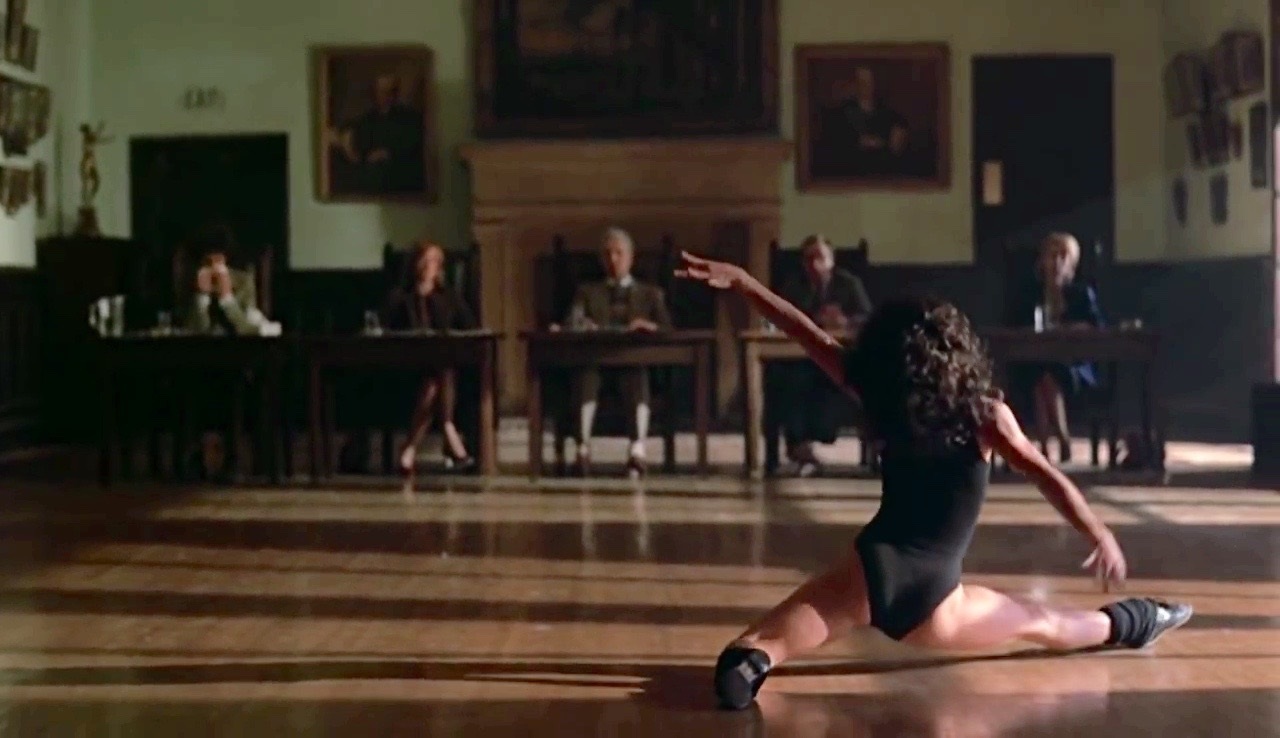 I can see why my VC enjoys Flashdance, at the very least for its dance scenes and soundtrack, which made the rounds on MTV back in its early days and were used effectively to promote the movie. While the film makes an odd but ardent distinction between dancing sensually and scantily clad in a bar to pop music versus actual stripping, it certainly boasts some outstanding dance sequences, most of which don’t really add anything to the plot but at least look good. To complement them, the Grammy-winning soundtrack includes some quintessential ‘80s tunes that still get decent airplay on the radio, from “Maniac” during a particularly strenuous workout to “Gloria” to the Oscar-winning theme song, Irene Cara’s “Flashdance…What a Feeling.”

A few have become iconic pieces of pop culture (the water falling over the chair, the final audition), but some of the less famous dances are just as memorable, from the gyrating “Manhunt” dance by Cynthia Rhodes (also from Staying Alive) to a trippy sequence with Alex and a unique strobing effect. The strobe dance is my VC’s favorite, though my appreciation for it was tempered by my concern for any epileptic viewers. I don’t think they put disclaimers on films of the ‘80s like they did recently with The Incredibles 2, so I can’t help but wonder how many unsuspecting viewers were negatively affected by that scene. Aside from the music and dancing, Flashdance is fairly thin, following Alex’s relationship with her boss (Michael Nouri) and her attempts to build up the courage for ballet school. Some scenes depend on how the viewer approaches them: When Alex’s boss follows her home after saving her from a lecherous jerk (Lee Ving), you could easily see it as sweet of him to protect her or borderline creepy since he had been trying to court her and now knows where she lives. (Luckily the movie opts for the former view.) Without the music, Flashdance would be hardly worth watching, but it still manages to leave you with that satisfied dreams-do-come-true kind of glow as the credits roll. My VC loves it, and Jennifer Beals is lovely, but, next time, I’d be just fine watching its music video high points instead of the whole thing.