(Today’s NaPoWriMo prompt was for a hopeful elegy, so I wrote mine about the mourning of a way of life.)

What’s almost as sad as a person’s death
Is the death of the way that they lived.

They once woke up, knowing what their day
Would likely hold,
And they’d watch unfold
A normal we’d say
Was strange and old,
But they took pride
And personified
A life that bloomed till the world went cold.

Disasters sudden or a cancer slow
Or new breakthroughs
Would cause them to lose
What was status quo.
They could not refuse,
For who can tell
A dead bloom, “Get well,”
When its winter’s come and it’s paid its dues?

But people live on, like roots that remain
For new blooms to rise
Once the former dies
And forgets the pain
Of its sad demise.
Our ways of life fade
Daily and are remade.
Remember that grief is short-lived for the wise.
___________________

And the number of award-worthy animated films of 2016 just keeps on growing. When I heard that a crowdfunded project called In This Corner of the World had beaten out Your Name and A Silent Voice for Japan’s Best Animated Feature award, I rolled my eyes that anything could top those two emotional hits. I still would have preferred one of them to win, but I can now at least see why In This Corner of the World would deserve to win. (It’s also further proof that the American Academy can’t seem to recognize an award-worthy animation if it hails from another country.)

Set before, during, and after the Hiroshima bombing of August 6, 1945, this Japanese period drama has a slice-of-life charm and simplicity that endures the ever-looming shadow of death. In many ways, it is reminiscent of Grave of the Fireflies (a painful favorite of mine), yet while that film is essentially grief and desperation from start to finish, In This Corner of the World uses its long runtime to show the daily life of its characters and how the approaching war changed that way of life for the sake of survival.

It begins with the childhood of Suzu Urano, an often absent-minded artist who grows up in an idyllic seaside town close to Hiroshima. After receiving an offer of marriage from a man she doesn’t know, she hesitantly leaves her own family to marry into the Hojo family in Kure, a Navy dockyard about an hour away by train. There is a wealth of humorous vignettes as Suzu adjusts to her new surrounding and family members, including a short-tempered sister-in-law and her daughter, and many aspects of their daily life are steeped in Japanese culture, from the fashioning of kimonos and later pants to the preparation of traditional field-to-table meals, which require resourcefulness once wartime rationing is implemented. From amusing asides and sweet romantic moments, the tone gets more and more serious and even dire as the war gets closer, the bombing raids become more frequent, and we the audience wait for the inevitable bomb to drop, wondering how it will affect Suzu and her loved ones.

The abrupt editing of all those vignettes does contribute to a sometimes unfocused storyline that puts certain details in doubt, and a few forays into Suzu’s imagination left me confused as to whether surrounding scenes were supposed to be real or not. Yet such negatives don’t detract too much from the humane power of the whole. Perceptive details and lovely snapshots abound, notably a post-war scene where the town’s lamps are uncovered (no longer in fear of air raids) and one by one shine into the night. The animation is not your typical anime style, with more of a gentle, hand-drawn impressionism that can be reminiscent of either a comic strip or a museum piece, depending on the tone of the scene. It’s surprisingly effective in its consistency depicting both Suzu’s carefree early life and the grief-stricken toll of war, and the filmmakers put great and laudable care into re-creating the pre-bomb city of Hiroshima accurately. 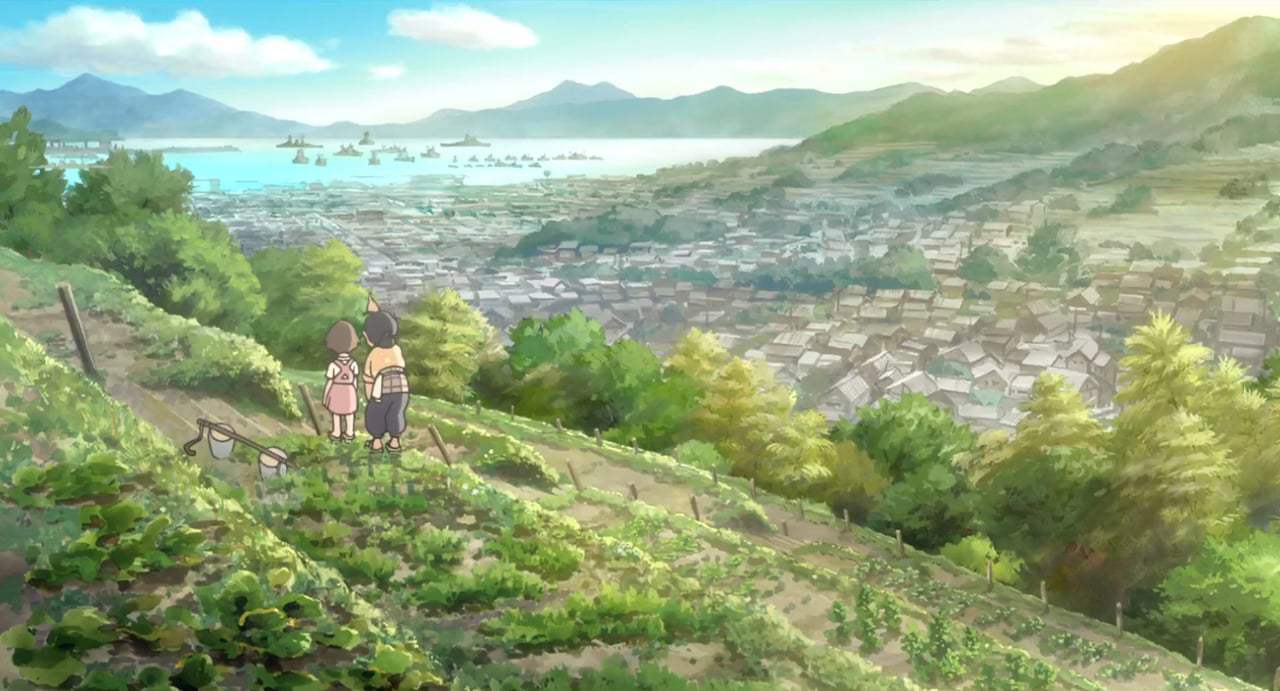 Once again, I’m torn on how to rank what is clearly a great film, trying to judge my personal opinion of it. It’s absolutely worthy of Japan’s top animation prize, and I can see why they would opt for the more historically significant choice, even over the box-office juggernaut that was Your Name. Despite its winsome animation and gradually developed poignancy, it didn’t bring me close to tears like Your Name or A Silent Voice or Grave of the Fireflies, which matters to me as a way of measuring the emotional impact. Even so, I feel like I’m growing fonder of this film the more I think about it. Perhaps its ultimate ranking is a wait-and-see. It requires some patience, but I highly recommend In This Corner of the World for its touching civilian-level view of World War II.

Best line: (Suzu, comparing her current life to a dream) “I don’t want to wake up because I’m happy to be who I am today.”   (Shusaku, her husband) “I see. The past and the paths we did not choose, they’re like a dream.”