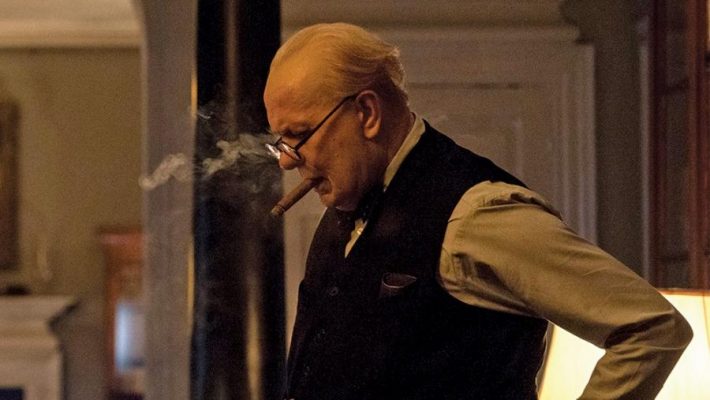 (Today’s NaPoWriMo prompt was for a poem featuring rebellion, so I took inspiration from Winston Churchill’s tenacity in resisting the German onslaught in World War II.)

An animal fights never so hard
As when its den, its nest, its yard,
Its hole or burrow, lair or hollow
Is assaulted, threatened, scarred.
It’s then they most are on their guard.

If they defend their home so well,
Then we as humans must rebel
Against invasion, no persuasion
To assuage our raising hell
To screen and shield our citadel.

The brightest day requires no grit
When we are free to relish it.
The darkest hour tests our power
And our backbone not to quit,
For rebel lairs dare not submit.
____________________

Were you expecting the 2011 alien invasion movie set in Russia? If so, psych! Get with the times because I already reviewed that two days ago (and it’s The Darkest Hour, by the way). No, this is last year’s Winston Churchill biopic, which is more likely the film people will associate with the words Darkest Hour (no The), not only because it’s more recent but because it’s a fantastic movie.

While Christopher Nolan’s Dunkirk depicted the famous rescue of the British army across the English Channel and Their Finest used it as propaganda back on the home front, Darkest Hour looks at the same events from the perspective of the leadership and politicians. An English political drama could very easily have made the proceedings eminently dry and boring, but that’s hardly the case when there’s an actor of Gary Oldman’s caliber in top form. His Oscar-winning performance as Winston Churchill is exceptional, one of those roles of a lifetime that he truly melts into, so that he’s hardly distinguishable from the real-life figure he plays, thanks also to the Oscar-winning makeup. From his droll habits and bearing to his brilliantly delivered speeches, it’s no wonder critics and audiences alike were saying, “Just give him the Oscar he so clearly deserves.”

Even the most acclaimed biopics so often leave me with a lessened opinion of their subjects, but Darkest Hour manages to show Churchill “warts and all,” so to speak, and still leave no doubt as to why he is considered such a great leader. In his very first scene, he’s at his worst, roaring at a fresh-faced, new secretary (Lily James) over minor annoyances, only to be calmed down by his loving and encouraging wife (Kristin Scott Thomas). The rest of the film serves to soften that intimidating figure we first see, as he buckles under the weight of the wartime decisions he faces and stands resolute in the face of overwhelming odds.

It was interesting to see how naively Churchill’s fellow leaders believed they could sue for peace even while war and destruction were upon them, and I was surprised at how unpopular Churchill was among his own Conservative party. Did the way he was described as someone with one hundred ideas a day, four of them good and the rest dangerous, remind anyone else of Donald Trump? Honestly, there were several scenes where it was as if they were describing the sitting U.S. President. “One never knows what’s going to come out of your mouth next. Something that’ll flatter, something that’ll wound,” says King George VI, played by Ben Mendelsohn (since I suppose Colin Firth was busy). Considering Churchill’s dictation habits, I can’t help but wonder if a modern Churchill would be tweeting in the privy as well.

Beyond the outstanding acting, the rest of the production is equally praiseworthy, such as the realistic sets and the way the dates change onscreen to make clear that events are happening within mere days of each other. Joe Wright’s direction is elegant but straightforward, and the script intelligent and witty in equal measure, providing welcome humor to lighten various scenes while also stressing the desperation of Britain’s situation. There’s some disappointment when you realize a great scene or two was fabricated, such as a voice-of-the-people sequence in the London subway, but the high degree of historical accuracy is only part of Darkest Hour’s strength.

It’s a testament to the power of oratory and a portrait of a great man under fire, not covering his whole life but the tension-filled days and weeks that helped define the course of his life and of the world. I’m tempted to rank it as a tie with The Iron Lady, another well-acted film about a great British prime minister that won its lead an Oscar, but I think Darkest Hour is a tad stronger overall and indeed one of the best films of 2017.