(Today’s NaPoWriMo prompt was to write a poem based on the reverse of a well-known phrase or saying, so I picked “home is where the heart is.”)

The mind is rarely where the home is,
Always drawn back here, back there,
To sites of sorrows, times of traumas,
Every missed or broken promise,
Every frightened, whispered prayer,
And doubts that dwarf the likes of Thomas.

Although it wishes peace to find,
The night is haunted by the day,
And progress can be undermined
By ghosts we thought we’d left behind.
The battlefields still hold their sway
When hearts go home without the mind.
_________________

MPAA rating: Not Rated (should be PG)

This post is by request of MovieRob, who gave the most correct answers to my new banner challenge and so earned the right to have me review a film of his choice. It’s also a chance to review something not from the last couple years, which seems to be all I’ve been reviewing lately. I knew The Best Years of Our Lives was one of his all-time favorites, and it is a film that still packs an emotional wallop even 72 years later, offering an authentic glimpse of how World War II veterans readjusted to civilian life.

Perfectly timed when it came out the year after the war ended, The Best Years of Our Lives follows three ex-servicemen returning to their fictional hometown of Boone City: an older sergeant and banker named Al Stephenson (Fredric March), a newly married captain named Fred Derry (Dana Andrews), and an amputee from the Navy named Homer Parrish (real amputee Harold Russell), who lost both hands and now uses a pair of hook prosthetics. Although all are eager to return home, they quickly experience difficulties in adjusting to their new civilian roles, such as Fred’s lack of experience in anything but the bombing for which he was trained or Homer’s insecurity over how his family and sweetheart will react to his hooks.

The performances are excellent across the board, rarely falling into dated overacting, with Russell especially standing out as Homer, well deserving his Best Supporting Actor Oscar despite not being a professional actor. (He’s also the only actor to win two Oscars for the same role, one an honorary award, and the only one to auction his Oscar years later.) March also won an Oscar, though I personally thought he was better in 1937’s A Star Is Born, and the film received five other Academy Awards too, including Best Picture. Above all, the story feels genuine, as if these were real stories that actually played out in the post-war period, even including how businesses and conspiracists viewed the war and the shaken people it sent back home.

Despite being a significant film and one of the best in its genre, I do feel The Best Years of Our Lives, at 170 minutes, runs about twenty minutes too long, and not all three of its stories carry the same weight. Homer’s is easily the best with a profoundly lump-inducing conclusion, while Fred’s love triangle with his shallow wife (Virginia Mayo) and Al’s daughter Peggy (lovely Teresa Wright) has its moments. So does Al’s homecoming, but his drunkenness drags on a bit with little resolution, even if I’m sure it’s a true depiction of the way many veterans tried to cope.

The Best Years of Our Lives may run long, but it’s a moving portrait of post-war America and the problems that plagued her veterans, which still ring true due to the permanence of war. One image near the end seems to capture the potential hopelessness of their situation, as Fred sits in the nose of a scrapped plane with no engines, grounded and heading nowhere. Yet it subtly says even more that right afterward, he learns the scrapyard will be recycled into new housing, a symbol of the renewal capable for men as well. 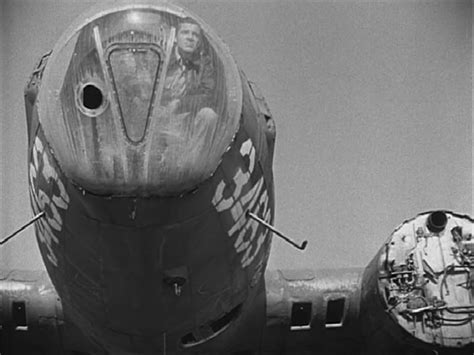 Best line: (Fred) “I dreamed I was gonna have my own home. Just a nice little house for my wife and me out in the country… in the suburbs anyway. That’s the cock-eyed kind of dream you have when you’re overseas.”   (Peggy) “You don’t have to be overseas to have dreams like that.”   (Fred) “Yeah. You can get crazy ideas right here at home.”