(Today’s NaPoWriMo prompt was to combine something big and something small, like maybe tanks and girls for example. Inspired by this silly anime, I wrote a fake account of how tank warfare might become a girls’ sport.)

Years past, the tanks rolled into town
And terrorized the folk.
With dread renown,
Each new crackdown
Would paint the sky in smoke.

They came in force to crash and kill
And crush with cannon fire.
Such lethal will
They did fulfill;
The people’s need was dire.

One fateful day, a young girl eyed
An empty tank left bare.
She seized with pride
This chance supplied
By carelessness and prayer.

Against all odds and common sense,
She drove the tank somehow.
Her zeal intense,
In her town’s defense,
She raised every eyebrow.

Anime has given us a lot of weird and wonderful concepts over the years, the kind you should just enjoy for their silliness and not think about too deeply, but making tank warfare a girl’s sport takes the cake for me. Even though I’ve never been particularly fond of tanks or the cute girl genre, Girls und Panzer was an admittedly fun ride, made even more fun by its big-screen follow-up.

The 2012 TV series featured a ragtag group of girls from Ōarai High School rallying under the leadership of skilled but reluctant transfer student Miho in order to win a series of tank war games and stave off the closing of their school and town, which happen to be on top of a giant aircraft carrier (yes, really). The characters are simple and likable, with most development reserved for Miho and her four closest friends. The rest of the vast cast gets the most basic development possible as members of other clubs that nonetheless contribute to the tank warfare, which seems to use real ammunition and has no regard for property damage, since the government underwrites everything as an official sport. The set-up is enjoyable enough, but the real draw here is the tank battles, explosive clashes between war machines that are depicted with surprising historical accuracy for the most part. At only twelve episodes long, the series is short but doesn’t lack thrills, as the underdog Ōarai team faces off against more accomplished high school teams that each conform to the trappings and tactics of a different nation (Americans, Russians, Italians, Germans, etc.). 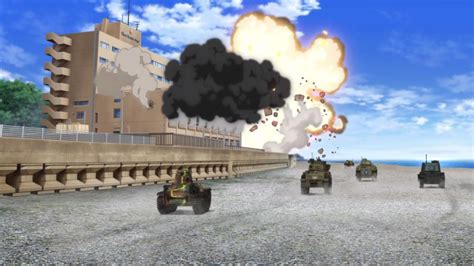 If any of this sounds entertaining, go watch it because it’s nice and short, and I’m about to spoil the ending. It’s probably no surprise, but Ōarai wins. Yet the movie doesn’t let that victory stand for long; one exhibition match later, the government is eager to shut the school down again, putting Ōarai in the exact same position of betting their school’s fate on a giant tank battle, this time against a University team. With this battle, however, they’re so hopelessly outmatched that their former rivals beaten during the series come to their aid and take part in one big tank free-for-all.

Like the series, there is some confusion at times over who’s in which tank, and what’s happening is not always as clear as it should be. Yet the battles are still quite well planned, putting different styles of tank to good use and employing some very clever strategy along the way. (One planning session between the allied teams is like an argument between the tactical methods of all the major countries of World War II.) While the show had some semblance of realism in the tank’s capabilities, albeit small, the movie goes full-out bonkers with tanks flying through the air, sliding down rollercoaster tracks, and zooming around like high-capacity bumper cars. Some of the casualties would carry more weight if anyone was actually in danger, but that apparently never happens in this sport, and it’s perfectly fine to stick your head out the top hatch while being shelled (really).

This isn’t the first anime film I’d recommend to anyone, but it’s now high on my list of guilty pleasures just for how gleefully crazy and bombastic it gets. By the time the battle moves into a theme park to use the rides as unconventional weapons, I was just enjoying the outlandishness of it all, and finding unexpected satisfaction with every enemy tank disabled. Sure, it’s silly and predictable, but that’s sometimes the very definition of fun. There’s a whole future series of films planned, but it’s hard to imagine how they’ll top this one.

Here’s a good representation of what to expect, if you’re curious: