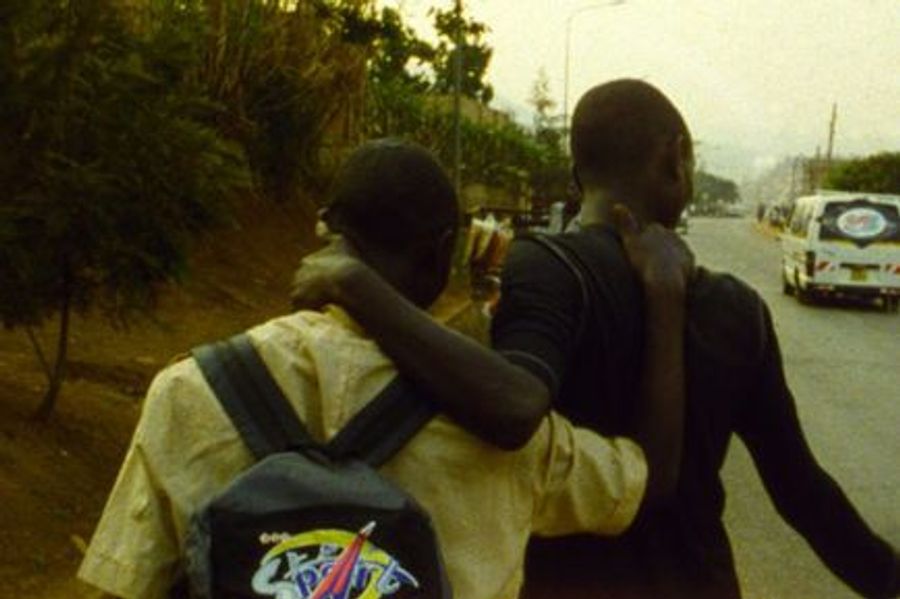 (Today’s NaPoWriMo prompt was to find a poem in a foreign language, pretend it is about a chosen image, and write our own “translation.” I chose the picture above, a still from this foreign-language film, and tried to base my poem off of the beginning lines of the Xhosa-language poem “The Cattle Killing,” which you can find here. Hopefully, it turned out all right.)

Let it stir up,
Let it stir up
Yellowing wakenings of dreams once real—
Friendships’ longevity will fade
Away,
Disappearing with every word
Unspoken or cankered
By lies, downturned eyes, and fears that won’t fade.
I remember us, we two,
Uncankered, unafraid, arm in arm,
Before our brotherhood’s ebbing
When our fears did rise
And our eyes turned down.
As I see you again in my regrets, I wonder,
Would we still be arm in arm
If I had raised my eyes?
___________________________

MPAA rating: Not Rated (little objectionable, but I guess PG-13)

Munyurangabo has sat for so long in my Netflix queue that I can’t even remember where I first heard of it or what I was expecting from it. One thing is certain, though: this is a critic movie, the kind that critics fawn over while regular viewers say things like “It was all right, I guess,” if they even have the patience to finish it at all. It’s not an off-putting disaster like the last critic movie I saw (The Assassin, seriously one of the most grueling films I’ve sat through), but it’s hardly a film I’d watch again, even with some positive elements toward the end.

While it was filmed in Rwanda as the first movie in the Kinyarwanda language, it was actually directed by American Isaac Lee Chung, who employed local Rwandans as amateur actors. In the film, Munyurangabo (Jeff Rutagengwa), or Ngabo for short, is a teenager traveling with his friend Sangwa (Eric Ndorunkundiye) as they journey to kill someone. On the way, they stop over at the house of Sangwa’s parents, whom he had left to move to the capital of Kigali. While revisiting friends and family, the pair find welcome, resentment, and a reminder that the two of them are each from enemy tribes.

As is common in critic movies, the story of Munyurangabo seems extremely padded to fill out its 97-minute runtime. There are long stretches of the two boys just walking together as the camera follows them from behind. The cinematography is mediocre, to me at least, and the shakiness of the camera adds both intended realism and an amateurish quality. The untrained actors themselves do all right, though there are times their lack of experience shows a bit.

I had just about decided that this film had very little worthwhile about it when a random stranger (apparently Ugandan poet laureate Edouard Uwayo) suddenly launched into an extended poetry recitation, which might have seemed out of place if it didn’t encapsulate so eloquently the movie’s themes, much better than the rest of the film tries. As an ode to the struggles of the Rwandan nation, it’s a moving one-take scene, practically a psalm, that has little to do with the story and yet everything to do with its larger context. The moral resolution that follows also conveys the value of forgiveness in this war-torn country, even if it doesn’t really address the plight of one of the boys. In short, the last fifteen minutes of Munyurangabo resonate while the rest is dull, so you might be better off just watching the poem scene and leaving the remainder for the critics.

Best line: (part of the poem recitation) “Give the child what he needs, and he can become a king…. The rich one can prepare a gift to give to the poorest one, and how poor is he?”