(Today’s NaPoWriMo prompt was for a list poem based in made-up names, so I invented a few species of troll to populate this bit of creepy nonsense.)

When trees are swimming deep in fog
And stars are dull as old eggnog,
The trolls come out to hunt and roam
Where humans dare not make their home.

The stankenlops and flicklepines
Emerge from their abandoned mines
And greet the trarterstumps and groyts
Embarking on their own exploits.

The nibblelungers beat their chests,
And grindlefangers make conquests,
And no one knows what skleeblers do
Since even trolls think it taboo.

No sheep or goat or man is safe
When hunted by a narberwafe,
And blattercrones’ deep moans are known
To chill a grown man to the bone.

The night is theirs but does not last,
And soon each lerpt and pincherclast
Will shrink back to their darkened pits
To wait till when the night permits.
____________________

The found-footage style gets a bad rap because of its gimmicky nature and its overuse in often poor quality horror movies since The Blair Witch Project. Yet it does have its bright spots, like the mind-bending “documentary” Lunopolis and the 2010 Norwegian import Trollhunter. Of all the monsters to chase with a camera, trolls don’t seem like an obvious choice, but Trollhunter strikes a unique blend of giant monster thrills and occasional dark comedy that gives the big-nosed brutes an outlet other than Middle-Earth.

The “filmmakers” in this case are three students from Volda University College, who think they’re investigating a bear poacher only to stumble upon the rough-hewn Hans (Otto Jespersen, who’s apparently a comedian) and his secret government-sanctioned job of hunting trolls. Tired of toiling in obscurity, Hans lets the trio follow him around on his troll control missions and explains the details purposely kept from the public, like the various species of troll, how power lines are really electric fences to keep them in, or the fact that trolls can smell the blood of a Christian man. (In that case, remind me not to move to Norway because I wouldn’t last long.)

The found-footage aspect is fairly standard as far as the shaky camera and often insufficient lighting, though there are some stand-out moments, such as the use of night vision to get a glimpse of the dangerous creatures. The biggest asset is Jespersen as Hans, who goes about his dirty fantasy job with weary competence, seemingly unfazed by the fact he gets paid to flash lights at three-headed giants. The special effects are also quite effective. While the trolls are often clearly CGI, their grotesque appearance somehow makes it look realistic too, and the finale with a mountain-sized troll is an awesome edge-of-your-seat sequence. 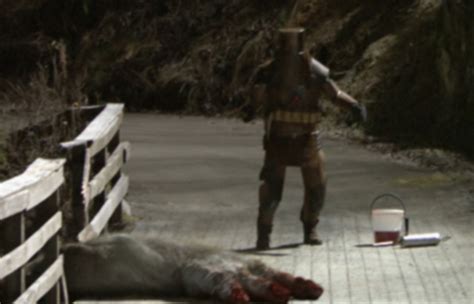 Trollhunter follows a lot of the usual found-footage tropes, but it does them well, managing to find a balance between absurdity and realism, like how a veterinarian explains the “scientific” reason that trolls turn to stone or explode when exposed to sunlight. Already something of a cult classic, the abundance of Norwegian culture and impressive scenery makes it an entertaining option for exploring Scandinavian cinema, though I doubt the prospect of trolls has helped tourism.

Best line: (the Norwegian Prime Minister, with a slip of the tongue at a press conference) “Few people find power grids attractive. I certainly don’t. Norwegians are pro-electricity, but against power lines. That won’t work in the long run. Norway has trolls, so more power lines are needed. That’s just the way it is.”