With this Blindspot series, I find it interesting that I chose Boyhood the same year as last month’s Yi Yi, since they’re rather similar as epics of the mundane, weaving in themes about the nature of life itself with all of its ups and downs and dreams and frailties. Plus, they’re both close to three hours long, so maybe not the best pair for a double feature. Comparing the two, I think Yi Yi has a deeper script, but Boyhood has such an innovative craftsmanship and natural relatability that it edges out its Chinese counterpart in my mind.

Originally to be titled 12 Years, Boyhood has the distinction of having been shot over the course of twelve years, from 2002 to 2013, and the actors literally grow older with their characters. Thus, instead of different actors playing the same character at different ages, we get to see young Ellar Coltrane as Mason Evans, Jr., as he grows up from six years old to graduating high school at eighteen. Likewise, his divorced parents (Patricia Arquette and Ethan Hawke) gain over those years the wrinkles and gray hairs that you know are not merely makeup, and his older sister (Lorelei Linklater, the director’s daughter) grows up alongside him.

Now, the obvious accusation of anyone who considers Boyhood overrated is that this technique is a mere gimmick that writer/director Richard Linklater cooked up for Oscar-baiting purposes. And I suppose you could very well see it that way. In a lesser film, I’d consider it just a marketing tool as well, yet it really works to add an extra layer of realism to the film. My mom has a picture frame that holds small photos of me from kindergarten to 12th grade, so that you can see how I aged year by year, and that’s exactly what Boyhood is. It’s not broken up into defined segments—like Age 7, Age 10, Age 13, etc.—instead, we notice the differences gradually, not unlike real life, such as the changes in Mason’s hair length and the moment when you realize his voice is suddenly deeper.

Being just a few years older than Coltrane, I also was able to directly identify with growing up in the same time period he does, and Linklater includes a wealth of little details that indicate the approximate year. Some of them I loved and experienced myself (watching weekday afternoon anime, singing to High School Musical), while others not so much (the Harry Potter craze, political campaigning). It took foresight and up-to-date planning for Linklater to incorporate some of these elements, considering that they were filmed at the time rather than looking back in retrospect. I loved one conversation Mason has with his dad about whether they’ll ever make another Star Wars movie, since it took place in 2008 and The Force Awakens wasn’t released until the year after Boyhood.

While these specifics serve to date Boyhood, they only add to its cinematic significance. It’s a literal snapshot of a time and place, just like Saturday Night Fever was for the 1970s, and when future generations wonder what it was like to live in the early 2000s, I suspect Boyhood is where they will go. Even the soundtrack is chosen well to reflect the times, ranging from Coldplay’s “Yellow” to Family of the Year’s “Hero,” along with some selections from Mason’s parents’ era too.

I’ll admit that not everything was relatable for me personally, despite how closely my and Mason’s ages matched. I’m one of those weird people who never did the whole teenager bit of staying out late and drinking underage and smoking pot and exaggerating to friends about sexual conquests, which I guess is a “normal” phase based on how Mason’s mom reacts to some of it. Yet I still saw aspects of my own boyhood in his, like when your parents urge you to finish chores or when you reach that age when adults complain you’re mumbling too much or when, without an active smile, your face looks gloomy and bored by default. Why does that happen anyway? I could also relate to his uncertainty regarding college and the future, since I’ve still got some now and I doubt that’s something anyone fully outgrows. 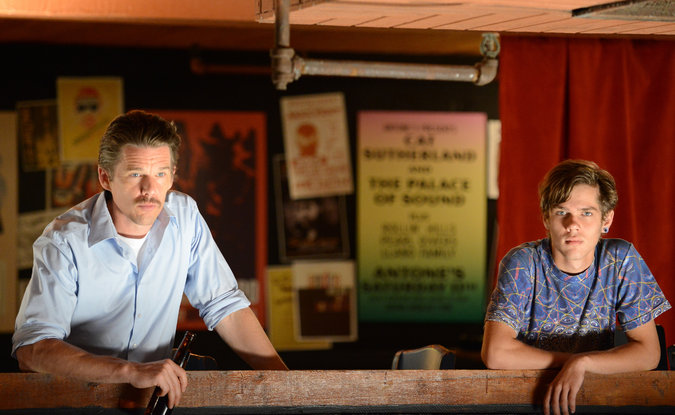 I was concerned at times that Mason seemed too much like a blank slate, a shallow placeholder while life happened around him, from nasty stepdads to unwelcome moves. Yet a personality of his own does emerge as he gets older, including an interest in photography and a growing distrust of “the system.” Despite his unwise moments in high school, there’s a sense of definite maturing, even down to a small later scene where he opts for water rather than beer, and that applies also to his wayward father, who suggests that the responsibility so many lack is simply something you grow into, if only others can be patient enough. Many of the adults in Mason’s life offer sympathetic wisdom and counsel, which he often seems to shrug off as judgmental nagging, but they’re words I feel he’d look back on with better understanding in the future.

I’ve yet to see Birdman, but I find it hard to believe that it was a more deserving Best Picture than Boyhood, which manages to balance its ambitious scope with rare personal insight. It’s quite long yet best seen in one sitting (maybe two), so it’s not a film I’d watch often, but I do think it deserves every bit of its critical praise. Full of simple conversations both awkward and profound, it offers a poignant and down-to-earth picture of growing up, as well as the price paid by parents who are no more sure of their path in life than the children they endeavor to raise; Arquette’s final scene is particularly moving in that regard and likely won her her Best Supporting Actress Oscar. I’m torn on how to rank Boyhood, but it’s a monument of a film that proves how a “gimmick” can be art when done right.

Best line: (Nicole, a new friend) “You know how everyone’s always saying ‘seize the moment’? I don’t know, I’m kinda thinking it’s the other way around. You know, like the moment seizes us.” (Mason) “Yeah. Yeah, I know. It’s constant –the moment. It’s just… It’s like it’s always right now, you know?”