Though we may think our minds are broad,
Aware of worlds beyond our own,
We all are uniformly flawed
In being tunnel vision-prone.

I wasn’t looking forward to watching Saturday Night Fever because I had a feeling it would be a lot like my VC’s last pick Dirty Dancing, a movie where I’ve seen all the best parts with little interest in the connective tissue. Yet she really wanted me to see its critically ravaged sequel Staying Alive (yes, SNF had a sequel), which I knew nothing about and of course had to watch the first movie to fully understand.  Now that I’ve seen both, conventional wisdom would say I should love Saturday Night Fever and deride its cheap sequel, but apparently I missed that convention. My feelings aren’t that strong on either one, but my sympathies are definitely flipped from the critical consensus I’ve seen.

As far as Saturday Night Fever, it fit my expectations to some extent. I had seen all the best parts already, but they’re still iconic for a good reason, especially the dancing prowess of Tony Manero (John Travolta in his star-making role). The soundtrack is one of the catchiest ever, full of high-pitched Bee Gees and even disco-fied classical music, all of which adds to the overwhelming ‘70s-ness of the whole production. Few movies capture their contemporary time and place so completely as Saturday Night Fever does, from the wide-collared shirts and weirdly high-heeled shoes to the background details like the posters of Rocky and Farrah Fawcett on Tony’s bedroom wall. Its status as a snapshot of a decade makes it significant, in a way that comes off as transportive rather than dated.

Knowing already the basic plot, I was mainly concerned that Saturday Night Fever would be too much like a certain movie I love to hate, John Travolta’s other lifestyle-snapshot film Urban Cowboy (worst movie ever, by the way). It has a lot in common, with its young Travolta protagonist being a self-absorbed punk who prefers to spend his nights drinking and playing his money away. Yet while Urban Cowboy seemed perfectly content with its white-trash carousing, Saturday Night Fever is at least self-aware about it. It rings bitingly true when Tony’s dance partner Stephanie (Karen Gorney) calls him “a cliché. You’re nowhere, on your way to no place.”

I could appreciate how Tony wakes up to how narrow and directionless his existence is, but the film gets bumpy on its way there. For one thing, I watched the R-rated original (I didn’t know there was a PG edited version until afterward) and was shocked at the amount of profanity, proving that the ‘70s were hardly better on that front than nowadays, perhaps worse. Tony’s friends are consistently scuzzy throughout as well, and by the time they were taking turns raping his wannabe girlfriend in the backseat of a car, I realized how much I wasn’t liking this movie. As I said, I recognized Tony’s experiences as a gritty and all-too-realistic journey to rock-bottom, which is often the only way to start improving, but outside of the music, it was hardly a journey I’d want to take again.

And then there’s Staying Alive, the 1983 sequel that has a 0% on Rotten Tomatoes. I don’t think it deserves such scorn because it was a far more enjoyable film to watch; you just have to embrace the way the original’s ‘70s drama has been largely replaced with ‘80s cheesiness. It all depends on how you approach it; I loved looking at the iMDB reviews, which swing wildly from 1/10 terrible reviews and 10/10 glowing ones. Travolta’s performance is also pretty comparable to the first movie, so I don’t know why he’d get an Oscar nomination for one and a Razzie nomination for the other.

Directed by Sylvester Stallone, Staying Alive features Travolta’s return as Tony Manero; the only other returning cast member is Tony’s very Italian mother (Julie Bovasso), though I understand a few other cameos were cut. Instead of dancing for fun in Brooklyn, Tony has instead moved to Manhattan to become a modern dancer on Broadway. The Bee Gees are still on hand for the soundtrack, but there’s a decidedly more ‘80s vibe to the music, rounded out by several great additions by the director’s brother Frank Stallone, who also has a small role. The glitzy strobe-lit dance floor has been replaced by synchronized on-stage athleticism that sees Tony leaping through lens flares and showing off a lot more muscle than in Saturday Night Fever.

Some may miss the grittiness of the original, but when Tony points out that he’s quit swearing, smoking, and drinking, I see it as a genuine personal improvement, not just a way to segue from R to PG. Of course, he’s still got a long way to go, particularly in his treatment of women. He’s still the same ladies’ man who can’t recognize the good thing he’s got with his fellow dancer and girlfriend Jackie (Cynthia Rhodes), choosing instead to continually pursue proven diva Laura (Finola Hughes). It’s frustrating how oblivious he is at times, getting jealous when Laura cheats on him and never considering what he’s doing to Jackie, but at least he comes around eventually. It’s true that Staying Alive hardly feels like a sequel to Saturday Night Fever, but I don’t think it’s that bad a film. The music and choreography aren’t as memorable as its predecessor, but they’re still impressive, even if the big number at the end grows dull with how long and overproduced it is. 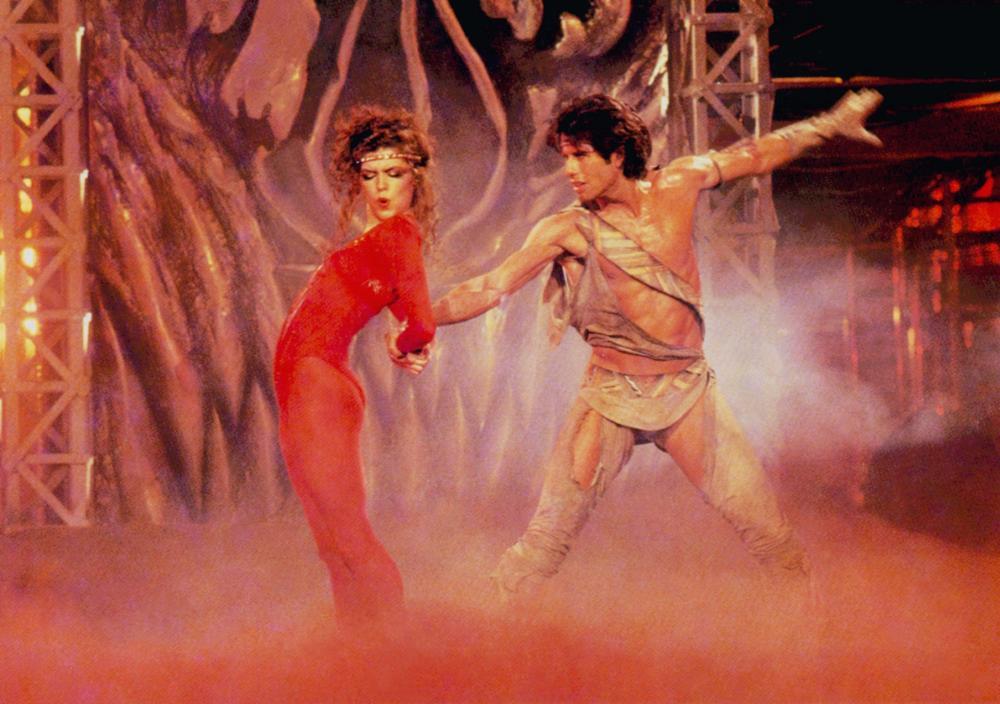 I’d gladly watch Staying Alive again, while Saturday Night Fever I think I’d only watch the PG version and only if I was in the mood for something depressing. The main reason I like Staying Alive more is how it does build on the first film. Saturday Night Fever was all about waking Tony up to his directionless lifestyle but didn’t get to show much after he comes to his senses. Staying Alive shows how he struggles to improve, put his talent to good use, and make something of himself, which is a more laudable purpose, despite the decline in nuance. When Tony struts along in his very first scene of SNF, he’s showing off mere bravado; when the same scene is echoed in Staying Alive, he actually has a reason to strut.