The world can vex,
Annoy, perplex,
Explicitly and in subtext,
Till one objects
“Life’s too complex!
Just pain in our collective necks.”

Yet when life’s skewed
And comes unglued
And changes unforeseen intrude,
One’s sour mood
And attitude
Can be renewed by gratitude.
___________________

MPAA rating: Not Rated (should be PG-13)

Setting aside the multitude of stand-alone anime films, like those from Studio Ghibli, there are just as many movies based on anime series, which tend to fall into certain categories. There are those that essentially provide a recap for the series, such as the first two films based on Puella Magi Madoka Magica. Then there are those that tie into a series but can stand apart and be enjoyed with or without prior knowledge of the franchise, such as Cowboy Bebop: The Movie. But more often than not, a film designed to follow up the events of a TV series relies on previous knowledge of said series, which is hard to get just right. Sometimes it’s difficult to capture the same magic the show had or the spin-off just falls flat; as much as I loved the time travel story of Steins;Gate, for example, its reasonably good film continuation didn’t feel necessary. (By the way, I highly recommend all these shows I’m namedropping.) Yet if any movie proves that it’s possible to revive a series and deepen everything that came before, it’s The Disappearance of Haruhi Suzumiya. 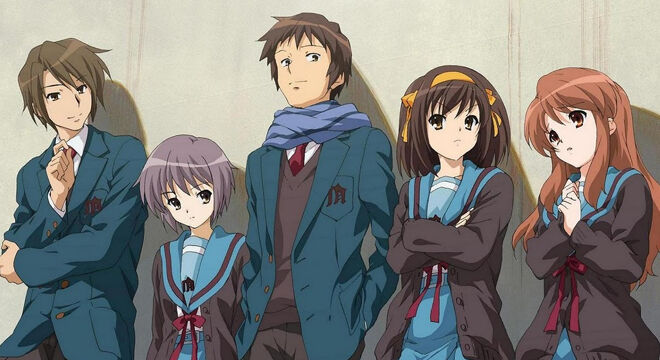 For those who don’t know, The Melancholy of Haruhi Suzumiya is a 2006 anime adaptation of a light novel series, which quickly grew in popularity, and its title character is one of the more recognizable anime icons. The main character, though, is Kyon (in the middle above), a high school student who falls into the orbit of the lovely, pushy, and highly capricious Haruhi (with the headband), involuntarily becoming a member of her new fun-seeking club dubbed the SOS Brigade. The other three club members Haruhi recruits turn out to be less-than-normal students and inform Kyon that Haruhi has godlike powers to reshape reality, which she doesn’t and mustn’t know about. Thus, the 2-season series follows their everyday adventures with the robot-like alien observer Yuki Nagato (the girl with purple hair), the time-traveling pushover Mikuru Asahina (girl with orange hair), and the good-natured but mysterious esper/psychic and king of exposition Itsuki Koizumi (the boy on the far left).

All of that information is much easier to digest in the series, which is light-hearted and charming for the most part. Haruhi tends to be obnoxiously bossy, such as exploiting poor Miss Asahina for sex appeal, but her craziness is nicely contrasted by Kyon’s straight man, who always complains and offers some perfectly amusing deadpan commentary. It’s a series that periodically incorporates science fiction into its prosaic high school setting and can be both fantastically complex and aggressively mundane, such as one episode with a four-minute stretch of nothing but Nagato silently reading or the infamous Endless Eight, in which eight consecutive episodes replayed the same events because the characters were stuck in a time loop. (The show gets a lot of heat and accusations of laziness for the Endless Eight, but it’s actually pretty impressive that the animators found eight different ways to present the same events and redrew each one.)

If you’re not sure if all this sounds worth watching, it is, and not just because there’s a murder mystery and a talking cat and a giant alien cricket. It’s not because Melancholy itself is particularly amazing or great, though it is pretty entertaining. It’s because the show allows you to fully enjoy The Disappearance of Haruhi Suzumiya, the 2010 movie that supposedly drew plot from season 2 and forced the showrunners to fill time with the Endless Eight. It’s quite a feat that the movie makes the show worth watching, rather than the other way around. I honestly can’t think of another series-based movie that can say the same.

I’ve heard all kinds of praise for Disappearance, with fans naming it their favorite anime movie or claiming it ought to place in iMDB’s Top 250 (it’s currently #42 on iMDB’s animation list). And now that I’ve seen it, I can’t say I disagree. It’s an outstanding piece of animation that surpassed my expectations in every way. As the title indicates, Haruhi suddenly vanishes on December 18 (yes, I waited till today to post this review), the world apparently rewritten so that no one remembers her, except for Kyon, who is understandably perplexed at this inexplicable change. All the supernatural characters seem to be ordinary people now, and Kyon must figure out how to return the world to “normal” and perhaps even question which world is better.

One of the more notable aspects of Disappearance is that it’s 163 minutes long, making it the second longest animated film of all time. It’s basically the equivalent of eight episodes of the series, yet despite its length, I was never bored. It’s hard to explain how unusual that is because the film is by no means action-packed. In contrast to the humor of the series, its tone is slow, serious, and melancholy. Unlike most anime films, there are no sweeping vistas or high-flying adventure; instead, it’s mostly winter cityscapes and interior scenes. How is it then that it held my attention from start to finish?

Well, aside from the fact that I’ve grown very fond of these characters, the plot manages to maintain interest in both the story and characters with some truly incredible pacing. Even with such a long runtime, there’s a lot of plot to cover, and the increased time allows characters’ motivations and the significance of their actions to sink in and add so much to their development. I don’t usually like to watch long movies, but this is one case where its length is carried largely by narrative and dialogue alone, and I’m glad nothing was cut, though I suppose Kyon’s awkward disorientation over his changed life could have been shortened.

Whenever the pace threatens to lag, something significant is revealed and the moving orchestral score kicks in, making for some memorable scenes that feel like momentous turning points (the kind of scenes that would probably end an episode if this were broken up as part of the series). For example, the reappearance of one murderous character who should be dead is filled with the same looming menace as the coming of Jaws. In addition, despite the restraint compared with more fantastical anime, the animation is exceptional and quite detailed, with special attention paid to very expressive faces and the clouds of smoke that are breathed out in the cold Christmastime weather.

As much as I wish I could say to everyone “go watch this movie” with no strings attached, I must admit that the series is a prerequisite for understanding who everyone is. Even though seventeen minutes are spent establishing the status quo before Haruhi’s disappearance, almost every episode of the show is referenced at some point, which is great for those who’ve seen it, less so for those who haven’t. To cut some corners, I’d say you’d only really have to watch the first six episodes of season 1, the first episode of season 2, and the last entry in the Endless Eight. The rest aren’t as necessary, though you may not understand little things like Kyon trying to talk to a cat. I especially loved when time travel entered the equation of the film, and we got to revisit past scenes with a Back to the Future-style altered perspective, again something new viewers could just roll with but nostalgic viewers will understand better.

Despite its potentially burdensome length, The Disappearance of Haruhi Suzumiya is a brilliant conclusion to a good series, transforming the show’s bright charm into subtle emotion and atmosphere. Hyperactive Haruhi herself can be irritating in large doses, so her absence for part of the film actually helps it and allows for some strong development for Kyon and especially Nagato, whose typically robotic face and voice finally get to reveal emotion in this alternate world. I also must point out, as others have before, that the English dub is one of the best out there. As the most significant voice actor, Crispin Freeman as Kyon provides some extensive and superb dialogue, such as an 8-minute soliloquy justifying a fateful decision, one which manages to engender both sympathy for him and regret for how it impacts another character. I’ve seen people refer to this speech as one of the greatest interior monologues of all time and with good reason, as it’s a key validation of his character.

I can usually tell how I feel about an animated film by whether I want to immediately watch it again after it’s over, and yes, all 163 minutes of Disappearance did just that. No, it’s not my new favorite anime film, but to those hesitant to watch a series just to see an overlong movie, I’ll just say you’re missing out.

Best line: (Haruhi, to Kyon about Christmas) “You have to believe in a dream if you want to have one in the first place. If you don’t believe, even the dreams that can come true won’t.”