When Nazis are doing what Nazis will do,
And you’re busy planning for D-Day’s debut,
Too busy to spare a commando or two
To send on a raid that could likely get you
Fired if it were to fail or fall through,
Who wouldn’t think, “I’ve an idea to pursue!
I’ll gather a murderous felon or two
Or twelve and I’ll line them all up in a queue
And train them to do what I want them to do.
Who cares if they misbehave out of my view
Or turn psycho, causing a hullabaloo?
It’s not my fault if something bad should ensue.
I know it’s a risk, and it’s dangerous too,
As my bosses would tell me if they only knew,
But expendability has its value.”
Who would think that? That’s right, very few.
___________________

MPAA rating: Not Rated (should be PG-13)

Considering I only saw it once years and years ago, I thought it was about time I reminded myself why The Dirty Dozen is so popular. After all, its memory brought Tom Hanks and Victor Garber to tears in Sleepless in Seattle. While it didn’t quite leave me choked up like them, I must admit it’s a unique classic of the war genre, full of surly machismo and a highly talented cast. And despite having practically the same basic premise, it’s way better than Suicide Squad.

In the months leading up to D-Day, Lee Marvin’s Major Reisman is put in command of an experimental unit of twelve convicted prisoners, who are to be trained and sent on a probable suicide mission for the Allied cause.  Half of them plucked from death row, this “Dirty Dozen,” as they’re later explicitly called, is full of murderers and rebels, and despite being offered amnesty if they survive, they aren’t about to become model soldiers overnight. Thus, the no-nonsense Reisman pulls no punches in whipping them into shape and encouraging them to work together for their own (and the army’s) best interest. 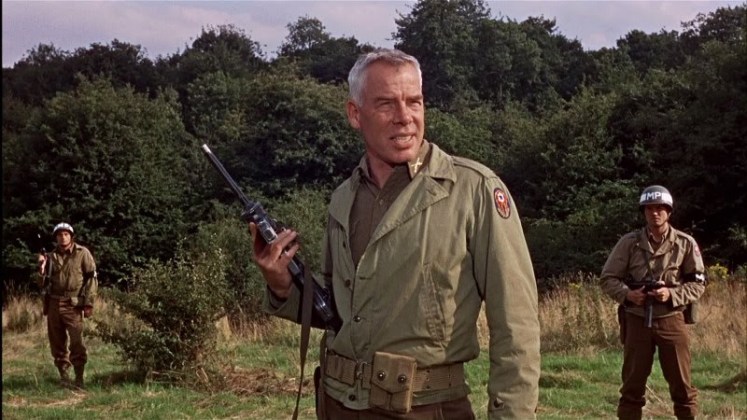 The main thing I recalled from my first viewing was that I had trouble telling the men apart. Obviously, I could recognize Jim Brown as the only black member, but the others all blended together to the point that the deaths toward the end didn’t mean much to me since they were all interchangeable. While not everyone stood out this time either, I was better able to distinguish the actors I’d seen elsewhere, such as Donald Sutherland as Pinkley, Charles Bronson as Wladislaw, and John Cassavetes as Franko, plus Ernest Borgnine and George Kennedy as officers. Others stood out for their distinct personalities, such as Clint Walker’s shy Posey and Telly Savalas’s psycho Maggott. That’s still only half of the Dozen that I could pick out of a lineup from memory, but at least it’s better than my first go-round.

When I ignored trying to tell the other six apart, I was able to just enjoy the movie, which starts out slow but gets better with time. Periodic humor keeps the tone relatively light, such as Pinkley impersonating a general, and although the Dozen are labeled as bad men, there were levels to their “dirtiness.” Some like Maggott with his religious zealotry were downright crazy, but others were simply high-strung and bitter in their defiance. A few even had mitigating circumstances to their crimes that made them more sympathetic than others. This was something that Suicide Squad didn’t do well in making all the villains psychopaths, along with some of the “good guys” too. There has to be someone the audience can sympathize with, and at least a few of the men in The Dirty Dozen were worth caring about.

While the training and the war games scenes were rather fun to watch, the best part is the actual mission against the Nazis to which everything else builds. With the high body count and higher bullet count, this is war action at its best, even if I’m still not sure where and when everyone who died bit the dust. The film got a fair amount of criticism at the time for its violence, and I was a bit shocked too by the ruthlessness of killing both Nazi officers and their potentially innocent escorts, though I suppose such is war and the mission at hand. The Dirty Dozen lives up to its reputation as a “man’s movie,” but my VC enjoyed it too. Even with its large cast, it wrings plenty of excitement from the risk of its somewhat implausible but entertaining premise.

Best line: (Reisman, leaving the room after a racist comment starts a brawl) “Oh, the gentleman from the South had a question about the dining arrangements. He and his comrades are discussing place settings now.”