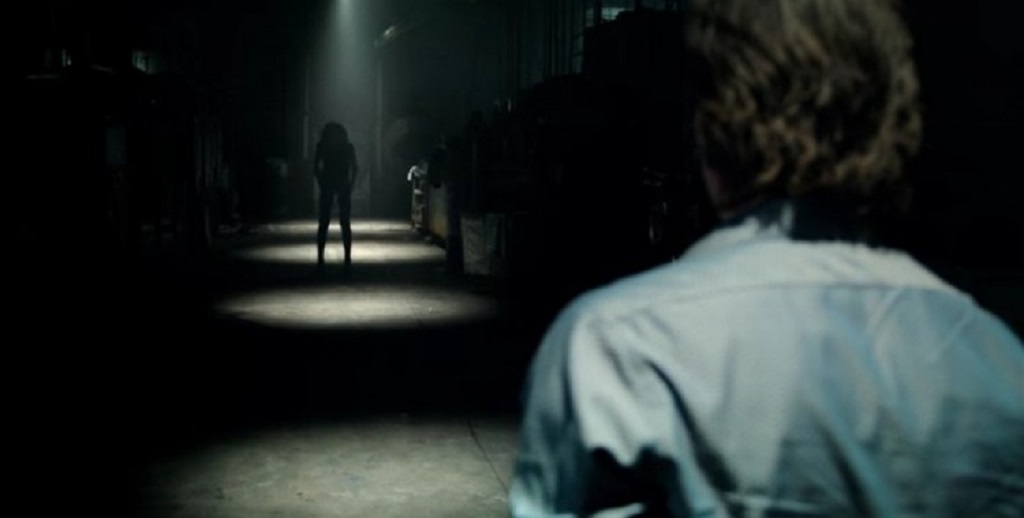 For my final Halloween-themed review for the big day itself, I went with a recent horror offering that I could tell from the trailers alone would be of the dread-and-atmosphere type that I prefer, not unlike yesterday’s The Ring. At the same time, Lights Out does what I like about horror a bit too well, preying on one of the most primal fears, the fear of darkness, and giving me something far scarier than all the vampires and monsters I know aren’t real. It’s based on director David Sandberg‘s short film, which encapsulated the concept in less than three minutes, three minutes that will haunt me and keep me looking over my shoulder for years to come. Thanks for that, David.

Sandberg cleverly expands his simple idea of a creature that only appears in darkness and can be seen by silhouette alone, connecting the frightful bogeywoman to a story of a family strained by mental illness. Teresa Palmer plays Rebecca, the loner daughter of clinically depressed Sophie (Maria Bello), who isn’t happy when Rebecca steps in to care for her young brother Martin (Gabriel Bateman). Martin’s having trouble sleeping, which is no surprise when his mother talks to a menacing, long-fingered phantom as if they’re old friends. This phantom seems to thrive on Sophie’s disturbed mental state and begins targeting the kids where darkness allows.

I was one of those kids who always slept with a nightlight or hall light on, so darkness has always been a source of unease for me. I remember even being scared stiff just from a description I heard at camp of some movie called Darkness Falls, and I’m still too nervous to check if it’s as terrifying as I envisioned. Lights Out has a similar concept for its villain Diana, keeping her always out of sight, a creature of darkness banished by light yet always there when it goes out. Maybe those calloused by countless horror films won’t find it all that scary, but Lights Out and its vicious shade scared me more than anything since The Babadook.

I also appreciated the effort put into providing a relatable family story alongside the scares, balancing Rebecca’s resentment of her mother with the acknowledgment that no one in distress should be abandoned. Everyone remains sympathetic, particularly Rebecca’s devoted boyfriend (Alexander DiPersia). I especially liked how the finale employed some inventive light sources to ward the specter away, sort of reminding me of the end of Wait until Dark. While she has a separate spooky origin, Diana is like an embodiment of the mother’s mental disorder, lashing out in an effort to keep her from getting better, which is a great metaphor for her struggle but also disconcerting in how it’s ultimately resolved.

Lights Out is a great example of the minimalist, bloodless frights that I think are harder to pull off than cheap gore, but its plentiful jump scares spooked me a bit more than I typically like. Heck, the three-minute short film is even more terrifying. You can watch it here, but I warn you: it’s concentrated nightmare fuel. (It’s also cool that Lotta Losten, the woman in the short film, reprised her role as the first person to see Diana.) Vampires and werewolves and zombies may populate more movies, but Lights Out proves that darkness itself is far scarier because its disquiet hits much closer to home.

Happy Halloween to everyone out there!